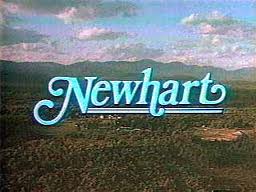 Final episodes of long-running shows often get high ratings, but rarely do they have memorable storylines.  For instance, the final episode of Seinfeld was derided for being a huge disappointment (especially considering the hype).  And although they delivered huge ratings, does anyone recall much that was memorable about the last episodes of M*A*S*H, Cheers or Friends?  However, the final episode of the Mary Tyler Moore Show was an exception - as was the sendoff for Newhart which aired the night of May 21, 1990.

Earlier that afternoon I had attended ABC-TV's "upfront" presentation.  (I worked in TV research for ad agency NWAyer, so attending it was part of my job.)  The big news was about Twin Peaks, which had become a sensation the previous month.  It was renewed for next season and was scheduled on Saturday at 10:00 (what a different world it was back then).  At the party held afterwards I had my photo taken with one of the show's stars, Madchen Anick. 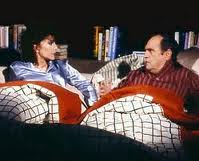 After taking my leave from the raw bar, I rushed home to watch Newhart.  Like everyone else, I was taken completely by surprise by the delightfully zany ending in which Bob (after being hit in the head with a golf ball) wakes up in bed with his wife, Emily (played by Suzanne Pleshette) from his classic Bob Newhart Show from the 1970s - it turned out the Newhart Show was a dream!  This topped the episode's other surprise when the silent brothers "Darrell and the other Darrell" finally spoke.  The telecast posted an 18.9 household rating/29 share (7 share points above the series' season average).

Twenty-five years later Bob Newhart is still with us at the age of 85.  Sadly, cast members Mary Frann, Pleshette and Tom Poston have all passed away.  As have the careers of Julia Duffy and Peter Scolari (although he has had a recurring role on HBO's Girls as Hannah's father and Duffy as the mother of the lead character in Looking, another HBO series).

This was a brilliant show with a truly memorable final episode. As a fan of the Bob Newhart Show as well as the Newhart Show, I was doubly rewarded when watching this the night it originally aired.

btw... I've always said that the Newhart Show owed a lot to the TV show Green Acres. The zany, absurdist plots and characters all swirling around the "grounded" central character of that show (Eddie Albert's Oliver Wendell Douglas) were forerunners of a similar formula used on the Newhart Show.

Ah, but did "Newhart" have an Arnold the Pig (or as wonderful a theme song)? Yes, watching that episode live was so rewarding because it was a complete surprise.