The Stonewall Riot - The Beginning of Gay Liberation (June 28, 1969)
Memories of Superstorm Sandy: A First-Person Account

Fred Astaire's death stands out in my mind because it coincided with a career milestone.  After spending nearly six years at ad agency Young & Rubicam I left to take a job as media research manager at NWAyer (at the time, the oldest agency in the country).  My first day on the job, June 22, 1987, was the day Astaire died, at the age of 88.  I heard word of his death after returning from a welcome lunch.  Another memory of that afternoon is that a guest staying at the Warwick Hotel, which was across the street from the office, had jumped to his death.

Years later, this suicide came up in conversation with a boss of mine at another ad agency, and she told me that the same thing happened on her first day at a new job.  We determined that it was the same suicide since her first day was the same as mine - and with a company in the same office building - the Burlington Building on 6th Ave. between 54th and 55th Streets. 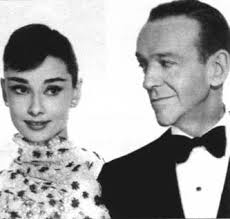 Getting back to Astaire - He didn't get his start in Hollywood until he was in his mid-30s.  Between 1933 and 1957 he appeared in 30 movie musicals with his dance partners including Ginger Rogers (in 10 pictures), Eleanor Powell and Rita Hayworth, among others.  And although he was a remarkably sleek and athletic dancer his sex appeal alluded me (unlike that of Gene Kelly).  I cringed while watching two classic films from 1957 where the 58-year-old Astaire was romantically paired with much younger actresses - 28-year-old Audrey Hepburn in Funny Face and 35-year old Cyd Charisse in Silk Stockings.