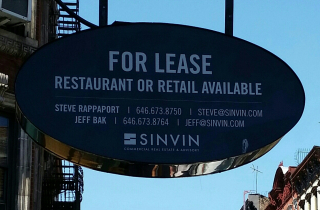 When I was a kid we learned in school about "ghost" towns, which were once bustling towns in the West and Great Plains that popped up due to farming or the mining of natural resources.  They thrived until the minerals were depleted  or because of persistent drought and were then abandoned.  This was also the fate of many factory towns in the Rust Belt in the last few decades of the 20th century.  Now, in the 21st century, some neighborhoods in Manhattan are bringing to mind ghost towns as their stores and restaurants go out of business on an all-too-regular basis after landlords jack up their rents to unreasonable levels.  Each day when I return home from work I brace myself for yet another "Space for Rent" sign in the window of a store I used to patronize.

To quantify the magnitude of these closings my friend Maury and I spent a recent weekend canvassing Greenwich Village and Chelsea to see for ourselves how pervasive the situation was, and we came across not 50, not 100, not 150, but 208 retail spaces that were closed.  We found the omnipresent "For Rent" signs on fifteen streets, with the greatest concentration on Bleecker St., 8th St. and Christopher St.  And if we had walked on every street in the West Village and Chelsea the number would likely have exceeded 250.  While this is a disconcertingly high number, an article on the website DAN Info reported that the area with the most empty storefronts wasn't Greenwich Village, but SoHo and TriBeCa. 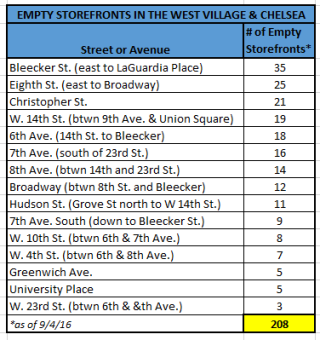 What's so troubling is that many of these vacant storefronts were businesses that served the residents of their neighborhoods - delis, laundries, shoe repair stores, and barber shops - only to be replaced by high-end retailers that cater to tourists.  Some of these storefronts can stay empty for a year or longer (the spaces formerly occupied by Manatus restaurant on Bleecker St. and Barnes & Noble on Sixth Ave. have been vacant for more than two years), but landlords have no incentive to find new tenants in a timely fashion.  In fact, it's considered a business loss which is a tax write-off.  As these establishments sit empty, they detract from the quality of life of the streets they're located on (especially since there are multiple locations on each street).  I feel rage boiling up inside of me when I walk by these eyesores knowing that the primary reason for them sitting empty is unrestrained greed. 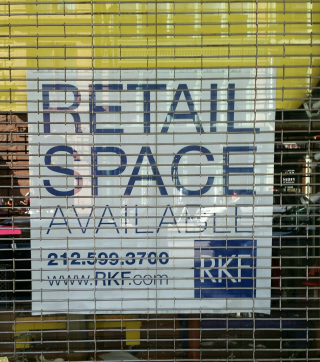 A SAD GALLERY OF EMPTY STOREFRONTS 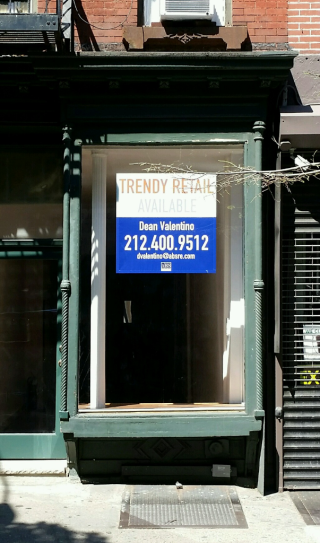 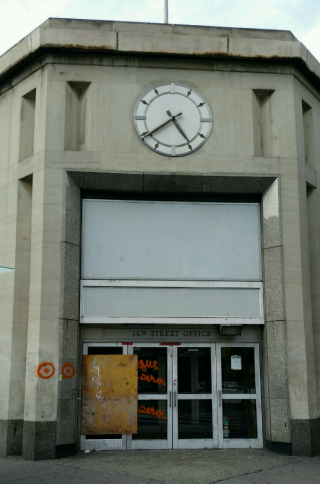 Stories about the Great Depression or the Dust Bowl era were often accompanied by a photo of a shuttered bank. However, this photo isn't from Nebraska, but the bustling corner of W. 14th St. and Sixth Ave. where HSBC boasted a once handsome branch office which has now sat empty for 18 months. 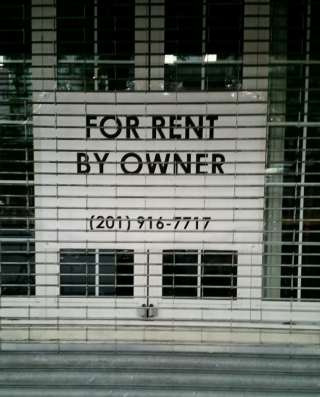 Across the street from the Chelsea storefront above. 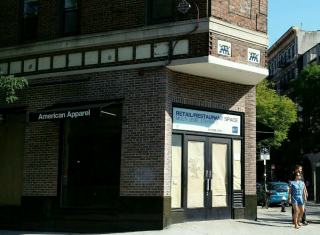 The corner of Sixth Ave. and Bleecker St. was briefly an American Apparel store. Before that it sat empty for a year after being a Banana Republic for many years. 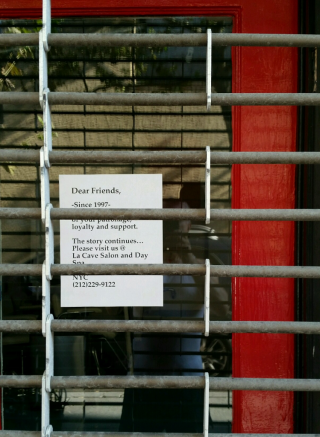 On this door of a shuttered hair salon on W. 10th St. the owner has a message of thanks to customers. The salon had been in this location since 1997. This site of a former restaurant is at the corner of Barrow and West 4th Streets and is across the street from my apartment. It has sat empty for two years. 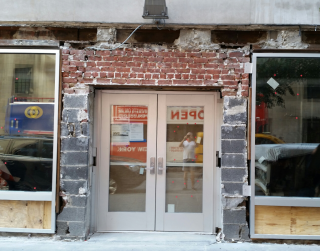 This eyesore on W. 8th St. is just off tony lower Fifth Ave. Once a branch of HSBC Bank, it's been in this condition for years. 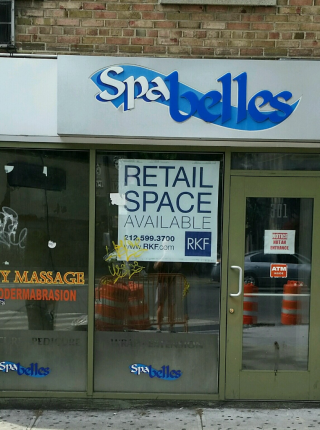 Nearly as ubiquitous as Starbucks, six Spa Belle's have been shuttered in Chelsea and the West Village due to a glut of competing nail salons. 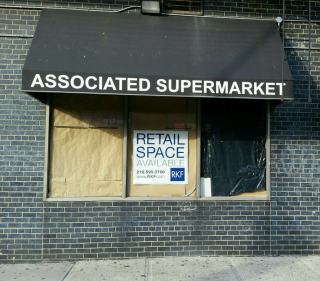 The closing of a supermarket is always a concern for residents, especially one like Associated, known for its low prices. It had been an anchor on W. 14th St. for more than 25 years. The retailer with the most square footage on Bleecker St. was Ralph Lauren's Polo store, but apparently the bragging rights were no longer worth the expense.  On the window shoppers are directed to other stores in trendy neighborhoods: East Hampton, West Broadway and Williamsburg, Brooklyn. 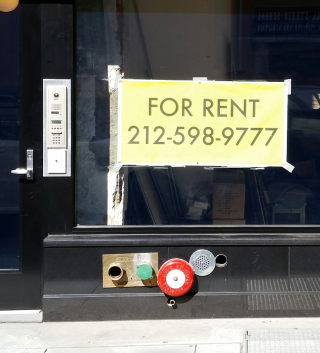 Just one of 25 empty storefronts on 8th St. - only Bleecker St. has more. 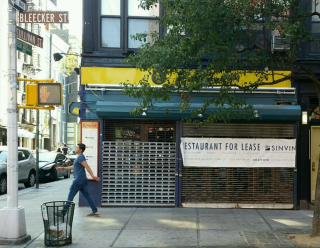 This restaurant is east of Sixth Ave. Empty storefronts can be found in equal numbers regardless of which side of Sixth Ave. they're on. 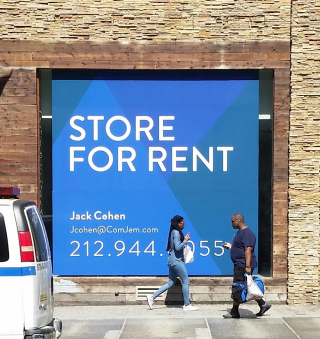 I have enough photos to create a decent-sized Pinterest board. This empty store is on W. 14th St. between Fifth Ave. and Union Square. 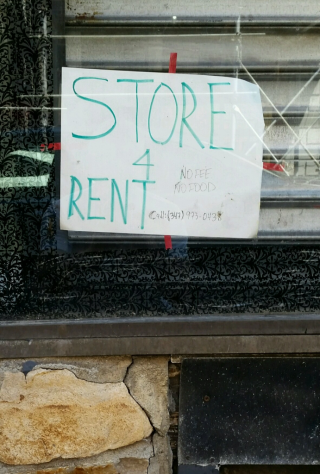 Not all signs are fancy ones. This one is on the window of a former consignment store that had been at this Jones St. address for more than 30 years.

Update. Since writing this post in September 2016 the vacancies continued to grow, especially on Bleecker St. in the West Village  The space that used to be Manatus restaurant on Bleecker St. has sat empty for six years, the former site of Barnes & Noble at the corner of West 8th St. and Sixth Ave. has been empty for seven years and the grand building at the corner of Sixth Ave. and West 14th St. that was occupied by HSBC Bank had languished for nearly four years (before it was taken down to make room for condominiums).