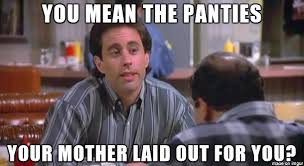 Although Seinfeld aired 180 episodes in its nine seasons on NBC I can easily say which is my favorite of them all.  No, it's not the "Master of Your Domain" episode, not the one about "The Soup Nazi", or even "The Bubble Boy".  Rather, it was the episode known as "The Cheever Letters", which I think of as the 'Panties' episode.  It aired on October 28, 1992 during the sitcom's fourth season.  The episode is filled with hilarious moments discussed below:

The episode opens with George and his fiance Susan informing her parents that their cabin, which Susan's dad was very attached to, had burnt to the ground.  Her tipsy mother gets a kick out of this news and upon her laughing uproariously, Susan's dad looks at her with disdain and tells her to "put on more lipstick". 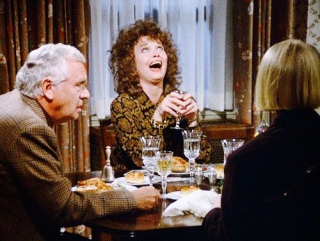 Upon finding muddy wheelchair tracks on the living room carpet Susan's mother scolds her wheelchair-bound sister-in-law with the exasperated comment, "It's just a matter of common courtesy, when you come into the house you wipe your wheels!" 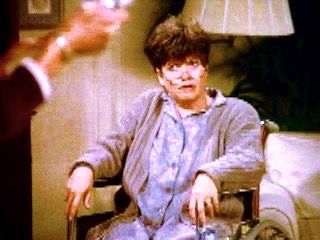 Letters in a strong box found in the debris of the destroyed cabin reveal that Susan's father had carried on an affair with author John Cheever.  Susan begins reading one of the letters out loud in front of the family, as well as George and Jerry.  One sentence reads, "I fear my orgasm has left me a cripple."  Susan's wheel bound aunt exclaims triumphantly, "I knew it!" 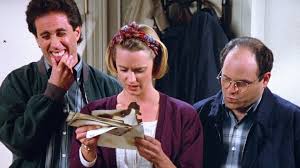 Meanwhile Kramer visits the Cuban embassy to get cigars and does a comical double take of a mysterious, elderly woman wearing sunglasses sitting silently in the reception area. 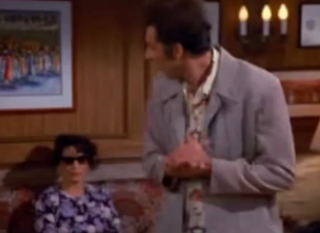 However, what made this my favorite episode is the storyline in which Jerry makes, what he thought was, an innocent comment during foreplay while on a date with Elaine's secretary: "You mean, the panties your mother laid out for you?"  However, it offended her and she storms out of his apartment.  The next day Jerry tells George about his date and how it progressed to "dirty talk", which enthralls George, but upon hearing Jerry's comment he looks puzzled, responding, "It's not offensive, abnormal perhaps, but not offensive." 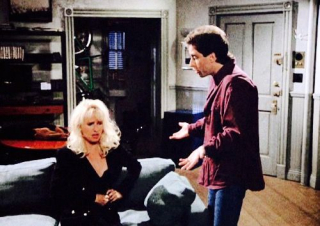 And then come the closing minutes of the episode.  Jerry had been worried that Elaine's secretary might confide in her about their date and asks Elaine if she mentioned anything to her and Elaine says no.  But then, as Elaine leaves Jerry's apartment, she casually tells him that she has to stop by her mother's apartment because her mom bought her some new panties, which she has "all laid out" for her!  This was such a wicked surprise because up until then Jerry was under the impression that Elaine had no idea what had occurred during his date. 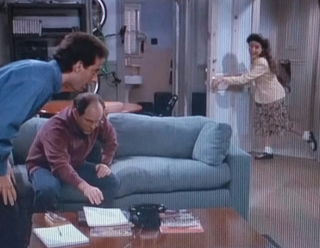 Tags: favorite episode of Seinfeld, fourth season of Seinfeld, John Cheever, Susan and George, the panties your mother laid out for you