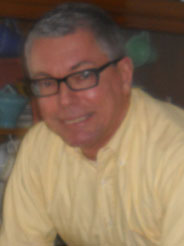 Rob was born at the peak of the Baby Boom (1957) in a suburb of Pittsburgh. Upon graduating from Penn State he moved to New York City to begin a career in advertising where he specialized in Media Research.  He lives in New York City, in Greenwich Village.  He's kept a daily journal since the late 1970's, so it's second nature for him not only to write about his life but also capture how world events meshed with it.  Here's what he has to say about his blog:

"I've always been fascinated by the stories friends & acquaintences tell of their memories when they heard about a momentous news event that stopped them in their tracks.  With that in mind, I've written about a wide variety of historical or pop culture events that resonated with me, specifically what I was doing when each occurred.  I hope that readers of the blog will be inspired to share their memories (after all, that's why I chose the word "You" in the blog's title), no matter how prosaic they think their stories may be."

Nice succinct bios of when local PGH TV/Radio was about the only option. Nothing is ever comprehensive of everything but...surprised no info about Ed & Wendy King. A very interesting duo. Also missing is Fred Rodgers a local pioneer who arguable opened up a national/international following. Of course he would be very tough to be succinct in a bio.
I look forward to exploring your blog further.

Yes... Interesting recap of personalities. Thank you. But, any one remember Bye Willams?
He was before Bill Cardille on studio wrestling.

...really great stuff...little stories about life and its feelings sure do make inspiried reading...

Its raining here`—-in Shawnee, Kansas, a suburb of Kansas City. My husband, daughter and son-in-law were preparing dinner and we started talking about hurricanes. I am a Nurse Practitioner and was teaching nursing at the University of Kansas Medical center in 1987. On September 27, I was in NYC At a medical meeting at the World Trade Center. It rained hard in the morning, but at noon it was strangely quiet! The eye of the hurricane was being experienced we were told. The rain returned in the afternoon and the meeting was stopped when ceiling titles became so water logged that they began falling on the participants of the Neonatal Medical Meeting. We were in a ballroom. It took forever for the cab to get back to my hotel which was near Times Square. I had to get our of the cab and walk about a block because the traffic was crazy. The hotel windows had been taped with “X’s” and the heavy curtains pulled! It was very interesting and exciting. especially for someone from Kansas. Your Blog brought back all those memories. I’m now almost 79 years old and my daughter is in her 50’s! Thank you for writing your blog Barbara L. Bridges APRN, EdD, Associate Professor, Retired. July 26, 2020.

Should be Tile, not Title.

I was enjoying reading your article about the various Pittsburgh Radio and Television personalities, until I was reading Jim Quinn's and the comment "dark side". I stopped reading and was going to move on to something else writing you off as another "angry liberal". After a minute or two, I decided to drop you a few lines just to remind you that Republicans and other Non-Democrats read blogs also. We also purchase movie tickets, show tickets, sports tickets, etc... Please go to your nearest store and get yourself a pair of goggles because the "Red Wave" is coming.
Happy Swimming,
Stuart Greenberg North Carolina

Hi Rob,
My name is Edward Fridell but my birth mother was Jozefa Frydlewicz (her birth name). I was born in 1947 in Germany and my mother migrated with me to Austrakia as a single parent in 1949. I do not have any siblings or blood related relatives in Australia apart from my own children. As I have grown older and retired from paid work I have been interested in learning more about my ancestry. I anglisised my name because of the dificulty in pronunciation of Frydlewicz.
I'm university educated with degrees in Chem Eng , Commerce and Business studies. I would be interested in further communication if you are so inclined.
Best wishes and Regards,
Ed Fridell.