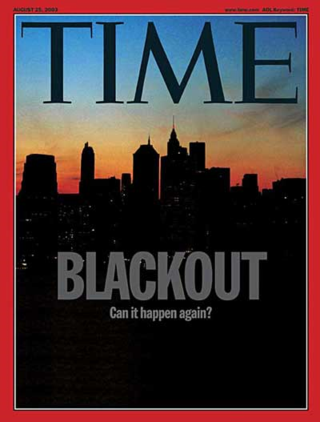 August 14, 2003 was sunny and hot Thursday in New York.  In the middle of the afternoon I noticed that my laptop wasn’t working, so I mentioned it to my administrative assistant, Terri, who came to my office to take a look.  She was fiddling around with the cables under my desk, but to no avail.  Shortly thereafter, word came that the power was out.  Most of us weren’t aware of it since the company I worked for (media agency Carat USA) was situated high up on the 36th floor (at 34th St. & Park Ave., pictured below), so our offices were bathed in sunlight, thus there was no need to have the lights on.  I immediately looked out my window to see if anything looked amiss (a knee-jerk reaction ever since 9/11), and noticed smoke pouring out of the big Con Edison plant nearby, but it turned out there was no connection. 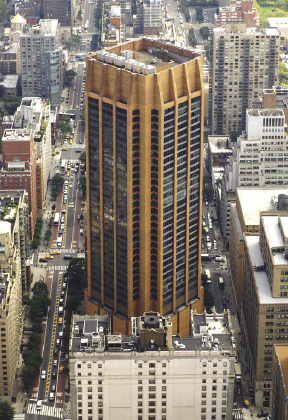 After congregating on the floor with co-workers, we broke into two camps - those who were unnerved and left immediately (again, memories of 9/11 still fresh in their minds) and those who hung around thinking the power might come on in a short while - I was in the second group.  After 15 minutes or so even those of us who waited decided to leave.

I didn’t expect it would be a big deal, but soon learned otherwise as it took 30 minutes to walk down the stairs since all of the floors below were emptying out as well.  And was the air ever stuffy!  A further hindrance was a lack of working emergency lights in the stairwell, so we used light cast from each of our cell phones to guide us.  Slowly making our way down the stairwell made me think of what a challenge it must have been for those in the Twin Towers on 9/11 who had to evacuate from much higher floors.

Eventually, I made it to the lobby and walked downtown with my boss, Joanne, who lived in Chelsea.  I was among the lucky ones, since my walk home was only about two miles (down to West 4th St.).  When I arrived at my apartment building I found my friend Nina, who couldn't get home to Long Island, waiting at my doorstep.  (She had walked up from the the Financial District where her office was.)  After freshening up a bit, we walked to the pier/park at the end of Christopher St.  On the way there we bumped into my friend Tom, who lived in the apartment building next to mine.

We hung out on the pier with a throng of other "powerless" Village residents for an hour or so until it got dark, and then the police instructed us to leave (normally the pier remained open until 1 AM).  Surprisingly, looking across the Hudson we could see that lights were on in the building in Jersey City and Hoboken. 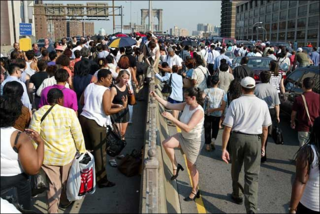 Walking back to my apartment was a challenge because there were no street or store lights, yet the lights from cars were blindingly bright, much more so than when the power was on.  Along the way we bought slices of pizza from a pizzeria that was serving in the dark from its takeout window.  After finishing our meal back at my place there wasn’t anything else to do but talk and it became uncomfortably warm (eating hot pizza didn't help).

The discomfort I experienced was more of a challenge for me than on 9/11 because, although there was a lot more mental anguish on that day, I didn't experience the physical discomfort I did on this night.  (It was a relief to wash dishes in cold water!)  Also, I was feeling vulnerable because my cell phone had run out of juice, and I was running low on money - and ATMs weren't working.  And despite Mayor Bloomberg's earlier assurances that power would be restored by 11 PM, it was not to be. 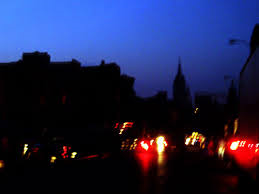 The next day, shortly before noon, Nina found a bus to take her back to Long Island (the trip took five hours).  Meanwhile, l went over to Tom's apartment to savor his great cross-ventilation.  I was dozing on the living room floor when the power finally returned at about 2 PM.  I shouted "Hallelujah!" and immediately dashed out to get cash from the ATM.  However, each neighborhood had a different schedule and some didn't get their power back until close to midnight. 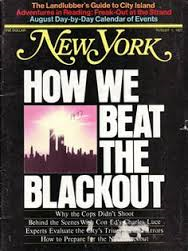 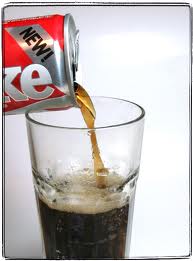 April 23, 1985 was a Tuesday and I had taken the day off from work (ad agency Young & Rubicam) because I was having a chest of drawers, platform bed and bookcase delivered from The Door Store to my new apartment in the West Village.  That morning, as I waited for the delivery truck, I heard on the radio about Coke introducing a new formulation for its flagship brand.

I grew up drinking Pepsi - there was a Pepsi bottling plant in my hometown with a huge illuminated bottle cap on its roof and as a child I thought it was Pepsi's headquarters.  However, I was still curious and bought a can of New Coke the next day.  I didn't detect much of a difference in the taste. (The idea behind the change was to make it closer in taste to Pepsi).  However, the reaction by Coke drinkers was swift and furious.  Because of this backlash "Classic" Coke was brought back during the summer.

Despite my longstanding preference for Pepsi I found my affinity weakening as we entered the 21st century.  I was a longtime diet soda drinker (ever since reading Sugar Blues in 1982) but rarely drank diet Coke because I thought it tasted more artificial compared to other brands.  However, Coke began dabbling in line extensions that piqued my interest.

An array of flavors were introduced, e.g. lime and cherry,that to my taste buds masked the artificial taste, so I found myself drinking diet Coke more frequently. (By the way, whatever happened to Vanilla Coke or Coke Blak?)  Then the introduction of Coke Zero in 2005 reeled me in further as I found it tasted very similar to regular Coke.  While I still occasionally drink diet Pepsi I think Coke Zero is by far the best tasting diet soda on the market.