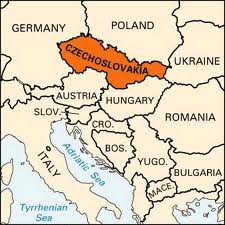 My grandmother, Margaret Cerovski (nee Revay), arrived in the U.S. from Czechoslovakia in September 1920 (she celebrated her 21st birthday while crossing the Atlantic).  After being processed at Ellis Island she continued on to Pittsburgh where her brother Michael lived (their 11 brothers and sisters remained back in the "old country"). 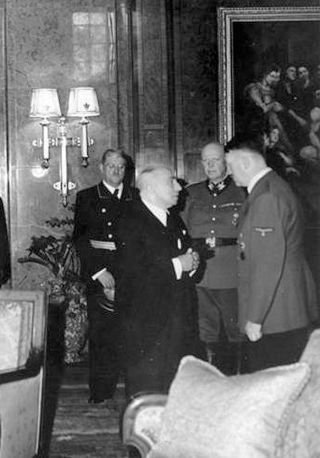 After she and my grandfather (from the Croatian region of Yugoslavia) became citizens in the 1930's Grandma thought about visiting her family because her mother was in declining health.  She also wanted to take my mother and uncle, who were teenagers, with her.  However, Czechoslovakia was being slowly partitioned by Nazi Germany and Slovakia, the eastern region of the country my grandmother was from, was agitating for its independence.  For these reasons my grandfather wouldn't allow Grandma to take Mom and Uncle George.  And then today in 1939 Czechoslovakia's beleaguered president (pictured with Hitler) signed over the country to Hitler and the thought of Grandma even visiting by herself ended.  WWII would begin six months later.

Although she never visited her homeland Grandma kept in touch with her brothers and sisters.  She was the middle child but managed to outlive all of her siblings and died in 1999 just six months shy of her 100th birthday.

Many thanks to my mother for filling in for me to recount her memories of the day Japanese planes attacked Pearl Harbor, an act that drew the U.S. into World War II. 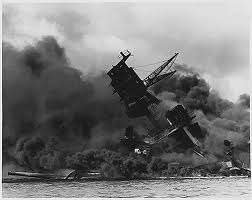 Sunday, December 7 was a sunny, but cold, early winter day in Pittsburgh.  After going to morning Mass and having lunch, Mom went visiting at a girlfriend's house where their socializing was interrupted by a news bulletin on the radio reporting on Japan's surprise aerial attack of the U.S. Navy base in Pearl Harbor, Hawaii shortly after sunrise.  Shortly afterward her friend Ginny's brother-in-law, who was home on military leave, received a call ordering him back to base immediately. (The book At Dawn We Slept is one of many on the subject of this sneak attack.)

Because Pittsburgh was one of the centers of U.S. military production there were fears about it being bombed as well.  This led to regular blackout exercises whereby residents were required, upon hearing air-raid sirens, to switch off all lights and pull down their window shades.  The goal was to make streets and landmarks harder to pinpoint in the event enemy bombers were overhead.  Mom's brother, my uncle George, was a senior in high school at the time and after he graduated was inducted into the Marines and sent to Paradise Island for training.  He then spent the next three years in the Pacific Theater repairing planes.  And Mom, then a junior in high school (her "sweet 16" birthday was the following week, on Dec. 14), helped with the war effort by distributing ration coupons.  After she graduated in 1943 she got a job documenting and tracking supplies of ammunition being put on supply ships sailing to Europe. 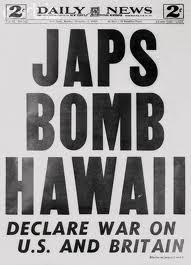 Although it was a time of great worry Mom didn't recall feeling fearful but instead there was a sense of purpose and solidarity with neighbors and schoolmates as each made contributions to the war effort.

As remembered by Mary Frydlewicz 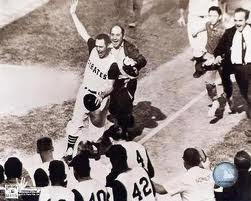 Growing up in Pittsburgh, one of the proudest moments in the city's history, a story passed down through the generations, was the Pirates' World Series championship in 1960 over the mighty New York Yankees.  In the most dramatic ending in World Series history, Pirates second baseman Bill Mazeroski hit a home run in the bottom of the 9th inning to win Game 7.  It seemed fitting that the title came to Pittsburgh because the "Steel City" was going through its "Renaissance" at the time, a massive civic campaign to clean the air/water, create parks and rebuild parts of downtown.

In the first six games of the Series the Yankees had scored twice as many runs as Pittsburgh, yet the Pirates managed to win three games.  In the games won by the Yanks, they crushed the Pirates (by scores of 16-3, 10-0, 12-0) while the Pirates wins were games in which its pitchers shined (6-4, 3-2, 5-2).  Then in Game 7 the Pirates ramped up its offense.  It was a see-saw game and after the Yankees scored two runes in the top of the 9th the game was tied 9-9.

"Maz" was the first batter in the bottom of the 9th and he hit his famous home run a little past 3:30.  My mother was watching the game with my older brother and sister who were already home from school (2nd and 5th Grades, respectively).  As for me, I was just 3 years old so I have no recollection.  Since my father had bet against the Pirates, when he came home from work at 4:30 Mom and my brother Darrell met him on the sidewalk waving a "crying towel".  His bet was with a neighbor from across the street for a case of beer (Iron City, of course).  Mr. Zamanski magnanimously didn't want Dad to pay-up but Dad insisted and they drank a bottle together.

Fast forward 50 years.  As the anniversary of Game 7 approached word came that a kinescope of the game had been found in the wine cellar of Bing Crosby's home outside of San Francisco.  Crosby had been a partial owner of the Pirates back in 1960 and was too nervous to watch the game so he arranged to have a tape made of the game being shown on the TV screen that he could watch later.  It's the only recording of the entire that exists. 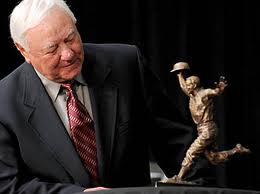 The Pirates also had dramatic World Series triumphs in 1971 and 1979, both times coming from 3-games-to-1 deficits to prevail (defeating Baltimore each time).  However, neither matched the adrenaline rush of that late afternoon home run over the scoreboard in beloved Forbes Field.  (The book The Best Game Ever: Pirates 10 Yankees 9 offers an in-depth, inning-by-inning account of Game 7.)  Happily, "Maz" is still with us (at age 77) and to honor him a statue outside Heinz Field was unveiled three summers ago. 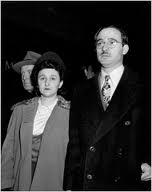 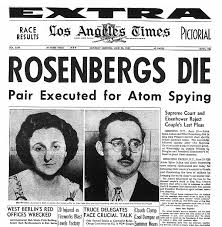 The June 19, 1953 execution of Ethel and Julius Rosenberg, who were members of the Communist party convicted of passing plans about the A-bomb to the Russians, coincided with a milestone for my parents - the purchase of their first home.  At the time my sister Linda was 2-1/2 years old and my mother was a month away from giving birth to my brother Darrell.  Mom and Dad were understandably anxious to move because they wanted to be settled in by the time my brother arrived.

The new house on Roosevelt Ave. was in McKees Rocks, seven miles northwest of downtown Pittsburgh  and overlooking the Ohio River.  It was part of a new development, Hanover Heights, that was very near to the small farm where my father grew up.  Ours was one of the first homes completed and after a string of delays our fledgling family moved in on June 30.  My brother was born a few weeks later and I came along four years after him.  And it's where my mother still lives (as of June 2020). 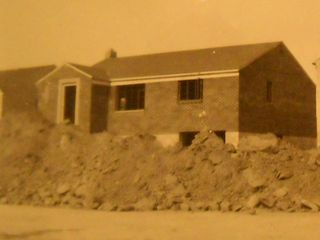 The early 1950s was rife with paranoia about Russia's plans to overtake the U.S.  Thus, the Rosenberg's actions were portrayed as having seriously comprised the nation's security.  Still, as a young mother, Mom felt some uneasiness over their execution since they had two young sons, Michael and Robert (pictured below), who were orphaned.  The execution of their parents in the electric chair took place at Sing-Sing prison in New York State. 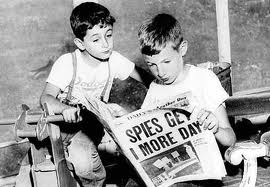 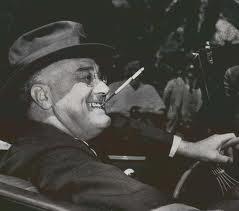 My mother was 19 years old in the spring of 1945 and had a war-related job in downtown Pittsburgh working for the American Bureau of Shipping.  The Bureau was located on the 32nd floor of the Grant Building, the second tallest building in Pittsburgh (it had been the tallest until the 44-story Gulf Building opened in 1933).  Mom's job, her first out of high school, was as a typist who prepared shipping certificates that were attached to crates of munitions being shipped to various European destinations (she was under strict orders not to discuss her work).  In smoky Pittsburgh of the 1940s this was a great place to be working, and the Grant Building was one of the city's premiere business addresses.

April 12 of that year was a Thursday and she and her friend/co-worker, Willa, left work and walked down to Joseph Horne department store where they got on the streetcar for the 20-30 minute trip to their neighborhood of Chartiers City.  Shortly after arriving at their stop they bumped into a neighbor, Mrs. Frankel, who told them the news that President Roosevelt had died a short time ago.  FDR died of a stroke in the middle of the afternoon while having his portrait painted in Warms Springs, Georgia.  The president was only 63 and just three months into his unprecedented fourth term. 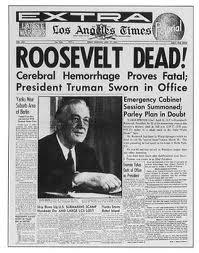 Shortly after the news was reported on the radio paperboys were out on the streets selling an "extra" edition of the paper with the breaking news.  Mom said it was difficult to imagine life without him; after all, her formative years had been lived entirely under FDR's presidency.  And Harry Truman's countrified persona couldn't have been more different from that of the more worldly FDR with his trademark monocle, cigarette holder and patrician accent. One month later the war ended in Europe and Mom was without a job.  However, she said it was all done in a very nice way and everyone who was let go was given a bonus.  With part of hers Mom bought a pair of earrings she had been admiring for some time at a jewelry store in the lobby of the Grant Building.  They had three small clusters, each with a different colored gemstone surrounded by rhinestones.  They cost $5 (about $65 in today's dollars).  And she still has them.

(To further immerse yourself in FDR's legacy you may want to consider the book FDR or the PBS video American Experience: FDR).

As told by Mary Frydlewicz