Technology is alleviating many of the hardships associated with blindness—and has the promise of ending it altogether. But how much further does it need to go?

About 170,000 vehicles use the Queensboro Bridge each day, passing by Larry Misrok’s apartment building, which sits at the entrance to one of the ramps. Crossing the street there might be a daunting task for anyone, but for Misrok, an 81-year old lawyer, it could be deadly. Misrok is virtually blind.

He navigates New York’s busy streets and broken sidewalks with high-tech glasses that have a camera attached to the side, made by a company called Aira. Misrok calls up an app on his telephone, which puts him in touch with one of Aira’s hundreds of workers around the country, who then commandeer the camera on his glasses and narrate his surroundings for him. “Watch out, there’s a curb coming,” or “There’s a cyclist coming up on your right,” the Aira helper might say. It’s not like having 20/20 sight, but it’s enough to get him to the grocery store half a block away—provided he turns away from the bridge ramp and not toward it.

Misrok’s troubles began in the 1970s, when he started seeing floaters in his eyes. “I thought it was a result of getting my head banged with a basketball the year before,” he says. He went to a local eye doctor but was told his problem was beyond their expertise. After trips to the head of ophthalmology at Montefiore hospital, and then a stream of experts at Mt. Sinai, New York University, Johns Hopkins, and the National Institute of Health in Bethesda, Maryland, he learned he had a rare autoimmune disease that caused inflammation in his eyes, destroying a layer of his retina.

The condition, known technically as birdshot chorioretinopathy, causes severe, progressive inflammation of the retina and the choroid, the vascular layer of the eye. It’s named “birdshot” for the small light-colored fundus spots that appear on the retina, which are scattered in a pattern like birdshot from a shotgun. “Right now, I can’t see you very well,” he says as I sit two feet away from him. “I know someone’s there, but I can’t tell if you’re smiling or frowning.”

Not without Aira, anyway. I went to visit him one Saturday afternoon to learn how the technology worked. When we’re ready to take a walk, Misrok puts on the glasses and headset with earphones, calls up the Aira app, and dials into an agent. Carl in Los Angeles picks up.

“I’m Larry Misrok. We’re going to go for a walk out of my apartment. Is the visual working well? I know you have audio,” he says as we step out of his apartment.

“The visual seems to be working,” the agent replies.

With his cell phone in one hand, a white cane in the other, Larry and I walk down the hallway. By the time we reach the elevator, we lose the connection, and the agent is gone.

About 1.3 million Americans are legally blind. Another 2.9 million have a visual impairment, defined as having sight worse than 20/40 in a person’s better eye, according to the National Eye Institute (NEI), part of the National Institutes of Health. That’s 4.2 million people who have limited or no sight, a jump from 3.3 million people recorded in 2000. That figure is expected to grow to about 7.2 million in 2030 and 13 million by 2050.

Not all who can’t see are born blind. A spectrum of disorders exists that can cause people to lose some or all of their sight over the course of decades. Deficits usually occur in the two photoreceptors involved in sight: rods, which handle dim light and night vision and seeing in black and white, and cones, which handle daylight and bright vision and seeing in color. These photoreceptors are located in the retina, a thin layer in the back of the eye. If you think of the eye as a camera, the retina would be the film. The retina also contains the nerves that tell the brain what the photoreceptors are "seeing."

The most common serious eye problems are retinal degenerative diseases such as age-related macular degeneration, a disease that causes a progressive loss of central vision, and retinitis pigmentosa (RP), a group of genetic conditions that usually begin with night blindness but often evolve into tunnel vision. There’s also Stargardt disease, an inherited form of macular degeneration caused by the death of photoreceptor cells in the central portion of the retina called the macula, and Usher syndrome, an inherited condition characterized by hearing impairment and progressive vision loss.

As the number of those afflicted has grown, so has the number of tools to help them navigate. Many are readily available to anyone with a smart phone, like the VoiceOver feature on iPhones, which tells users which buttons they’re pressing, or GPS apps that let users know where they’re standing in the middle of a city, can announce bus and train stops, and vibrate every time a street is crossed.

There’s a popular app called Be My Eyes, that, like Aira, puts the user in touch with sighted workers who commandeer the user’s cell phone camera to help them see prescription labels, thermostat temperatures or how much money they’re holding in their hand. Richard Faubion, a development director for the Foundation Fighting Blindness, who is severely visually impaired himself, says he’ll call a Be My Eyes worker to tell him if his tie matches his shirt, whether he’s holding a can of peas or green beans, or if his suitcase is about to go by at an airport luggage carousel.

For computer work, there’s JAWS (Job Access With Speech) and Microsoft’s NVDA (Non-Visual Desktop Access) software that reads aloud the text on a screen and tells the user what they are typing as they type. SeeingAI, developed by Microsoft, combines many tools into one app, using artificial intelligence to describe people, text, and objects.

“Technology can be an extremely powerful tool for someone who is visually impaired if it is used along with a person’s other skills and abilities,” says Ryan Jones, a legally blind program manager with VFO Group, which helps companies become more accessible to users with disabilities. “These types of programs allow equal access to opportunities and careers for people who are visually impaired. They’re in just about every type of profession you can think of—except maybe airline pilot.”

Misrok and I walk through the lobby of his building and head toward the street, to see if the internet connection is better outside. He extends his cane out in front of him as he enters the revolving door. When he pops out the other side, he heads toward the driveway in front of his building but stops under some scaffolding, which probably doesn’t help with the internet but I’m not sure he even knows it’s there. Holding the cane under one arm, he uses both hands to hold the phone and double-tap the app. Every now and again, he puts his ear toward the phone to make sure he’s not missing any vital instructions.

"The [remote assistants] keep me on the road, not walking off into the bushes."

The 120-some-odd paid agents across the country are told in an initial “onboarding” session what the user’s preferences are: the type of information they want, how detailed, and how they want it transmitted: Do they want details described as being to the left or right, or do they prefer degrees or hands on a clock?

Users then pay from $99 a month for 120 minutes to $199 a month for 300 minutes. Aira used to provide the glasses free of charge but now sells them. Misrok got his about two years ago.

Misrok says he finds the glasses very helpful in Massachusetts, where he has a home in the Berkshires. “I can walk down paths alone through the woods, and they keep me on the road, not walking off into the bushes,” he says. “I don’t need them for going to work. I have good staff.”

“These are some of the problems with technology, and some of the frustrations when you’re visually handicapped,” he says, as we stand waiting for the traffic light to change.

I am always seeking upgrades and gadgets that will help me in day to day activities and just heard about some advancements that Samsung is doing with their phones. 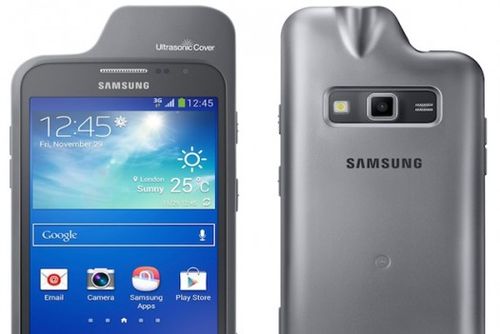 Samsung added some software features for the visually-impaired to its Galaxy Core Advance late last year, and now it’s released some physical ones as well. The Ultrasonic Cover, Optical Scan Stand, and Voice Labels, all make it easier for those with difficulty seeing to navigate and access information.

The Ultrasonic Cover is a case that can be used to detect objects in the surrounding environment. It vibrates, or sends a Text-to-Speech alert, when an object is near, and can detect items up to 2 meters away.

To make it easier to read, Samsung created the Optical Scan Stand, which can identify text and read it aloud using Optical Character Recognition (OCR) technology. Users just have to dock their phone in the stand, and place a piece of text at the base of the reader for it work.

The final piece of accessibility tech is an NFC-based Voice Label option, which makes it easy to record notes and other audio information. Samsung suggests it’s a device that could be useful for recording short reminders about how to use a particular gadgets.