Aquamanilia are stylized pitchers used for ritual hand washing by shaman, rabbis and priests for religious ceremonies. There is arguably no better collection of them than the one at the Metropolitan Museun of Art in New York.

Aquamanilia means "water for the hand" and each vessel had two openings, one for filling with water and one for pouring. Human and animal forms were used too, the animals often being fantastic creations. Certainly more inspiring than a regular bar of soap and a tap.

Here are some great examples:

Just read this great article in The New York Times in the Modern Love column. It was about a woman who performed a cleansing ritual after her divorce to help free her spirit and increase her happiness.

A short excerpt will give you an idea of what it is about:

WHEN I returned she took me by the hand and led me into the kitchen, saying, “I was looking for an extension cord, and I saw it.” She opened the drawer and showed me. It was a playing card, the seven of hearts. Typical. Where was the rest of the deck?

“It is the end of your marriage!” she said. Well, O.K. I was already aware of that. But apparently this card made it official; it seems the seven of hearts in the tarot deck is the card of total disillusionment and disorder.

And what a tarot card. So different from the ordinary one in the drawer, her card was a blue and green image of seven weeping, melting fountains dripping futility into a sad pool.

“You must burn it,” Georgette continued. “And put the ashes in a container and bury it. During the eclipse.”

Here is the article in its entirety.

Now there are a great many things that you should NOT do during an eclipse including signing a lease of making any important big decisions like for a job. But "cleansing" is a perfect use of the eclipse energy, as you will see in this story.

And you can read more about eclipses in general on my site www.thestarryeye.com .

Yikes! It's fast becoming that time of year again. Before you belch out a "bah humbug", try getting a little new age holiday inspiration. When you are looking for a stocking stuffer you might be inspired by The Oracle Fortune Teller (only 18 bucks - how can  you go wrong??). Pose a question to this "wise, mysterious oracle"  and receive an immediate answer (as opposed to me who takes eons to answer any pressing questions). You can find it online at this link.

Oh where will the trend in "otherworld" television programs end? Evidently not with ABC which has just announced the creation and possible launch of a new ressurection series.

Here is the press: ABC has given a put pilot commitment for a drama called Pushing Daisies about a guy who can bring dead people back to life by a simple touch.  The project is from writer Bryan Fuller and producers Dan Jinks and Bruce Cohen via their Jinks/Cohen Co. and Warner Bros. Television, per Variety. 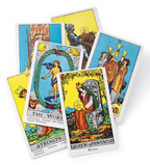 I find that when I can't think of anything else to give (how many ties and scarves can you reasonably expect to wrap?) I give something that I would truly want to receive. While my Astrology Book is always a rave, you may also want to consider a new deck of Tarot Cards. Refer to my previous posts Read Your Own Cards, Part 1 and Read Your Own Cards, Part 2 for instructions on how you might do your own reading. Although the deck pictured here is the most popular version (the Ryder Deck), try something new and different. This deck is available from Restoration Hardware, find it online at this link. A fuller choice can be found at Aeclectic Tarot.