Did you know that Leonard Cohen uses the I-Ching? I-Ching

is a predictive tool that uses symbols in a philosophical and meditative way.

I have been a fan of Cohen's for many years but only recently discovered this wonderful new age aspect to his personality. This video is about 45 minutes long and only a few minutes are devoted to I-Ching but the entire video is worth viewing.

Here is an article from Reuters that talks about an astrology conference where they predict an Obama win. I say that comparing the birth  horoscopes of Barak Obama and Mitt Romney to determine who will win the election is too close to call. I strongly believe that their choice of VP running mates will help determine the winners. Joe Biden helps to improve Obama's chance of winning - their combined chart is strong than each one individually. Let's see who Mitt Romney chooses and do a further analysis.

NEWS ORLEANS (Reuters) - The votes are in and it is unanimous: Barack Obama will win re-election to the U.S. presidency in November, according to five astrologers who offered predictions at their convention on Tuesday.

Each of the five astrologers on the presidential panel explained how they came to their assessments, with most relying on studies of celestial charts pertinent to both Obama and presumed Republican nominee Mitt Romney for the date of either the election itself or the next presidential inauguration.

For Chicago astrologist and corporate lawyer Nina Gryphon, it was her study of the Aries ingress - the exact time when the Sun enters the sign of Aries - that clinched the decision. "It's obvious," she said. "Obama stays where he is without a change in status."

Billed as a meeting of the world's top astrologers, the conference in New Orleans drew some 1,500 people who participated in workshops and panel discussions.

Not to be confused with astronomy, the scientific study of the physical universe, astrology uses non-scientific methods to predict how the relative positions of celestial bodies may influence human behavior and future events.

Denver astrologer Chris Brennan said his chart study focused on public profiles of the two presidential candidates, both of whom "are entering into peak periods of eminence in the next few months." But he said there was a key difference: "Obama's peak period stays consistent throughout the election, whereas Romney's seems to falter a few weeks before the election," he said.

Most of the panelists placed a high degree of certainty on their forecast, but a few pointed to potential difficulties Obama may face after his predicted re-election.

"The ingress of Saturn into Scorpio may trouble him," Brennan said. "It won't cost him the election, but it may indicate difficulties in the first half of his second term."

Brennan could not specify the potential problem, but "it pertains to his career and his reputation," he said.

As to the election itself, Brennan raised the possibility of the contested 2000 election being revisited.

"We should all be aware of the Mercury retrograde that will occur on election day," he said, referring to an optical illusion that can make a planet appear to reverse direction temporarily.

"Most astrologers are pretty certain that this could cause problems similar to what happened in the 2000 election," Brennan said, referring to the contested Florida vote that was settled only when the Supreme Court ruled that George W. Bush should be president rather than Al Gore.

The retrograde, Brennan said, "seems to imply that there's something up in the air about the election until sometime later in the month."

"It's possible it won't be finished for Romney until the last week of November," he said.

Two of the panelists participated in a similar session four years ago when the panel also gave a unanimous thumbs-up to Obama. 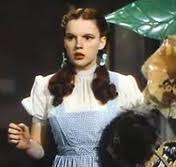 If you feel a tug on your heartstrings this week, it will most certainly be caused by Mercury which plucks into mushy romantic Cancer. Everything you can conjure is illuminated! So feel your oats, take charge, take action and just take, take, take.

(Judy Garland had Mercury in Cancer)

and here's a guide to the best books available this month. This column is (c) 2012 THE STARRY EYE, LLC., All Rights Reserved. For Entertainment Purposes Only. Madam Lichtenstein is the author of the best selling astrology book “HerScopes

ARIES   (MARCH 21 - APRIL 20)
Don’t be content to let others set the pace in love and call the shots. (As if you ever do...) You are now set on a collision course where you must take the wheel and drive. And you can avoid the pitfalls. The trick is to listen carefully and survey the landscape before you take any action. Preparation is pivotal, Aries, as is a discerning eye. Heck, make it two eyes.

TAURUS   (APRIL 21 - MAY 21)
You have quite a few strong opinions that may not be ready for a prime time audience. Can you patiently hold them in and let them germinate? Forgetaboutit, Taurus. Now you simply cannot contain yourself. Throw your heart to the wild wind, give your thoughts room to roam and see how your ideas generate action. Just be sure to hire a personal censor....

GEMINI   (MAY 22 - JUNE 21)
Geminis will contemplate their bottom line this week. Money becomes the be all end all as you plot the most profitable course of action. Much time and energy will be spent on maximizing your profits. But in the end can it really buy happiness, Gemini? Well if not, it can certainly buy extravagant comforts and fair weather party hearty comrades. Oh let it rain!

CANCER   (JUNE 22 - JULY 23)
You personal star begins to glitter and glow this week. Pack the sunglasses! This is no time to sit in the background and blend in with the wallpaper. Get out there and mingle, Cancer. You have a good window of opportunity to expand your social circle with some interesting new faces. Who knows where your assorted amours are hiding? You soon will know....

LEO   (JULY 24 - AUGUST 23)
Do you feel particularly intuitive? Well you should. Leos break through the fog and see a bit into the future. Secrets are revealed, conspiratorial plans are uncovered and hidden enemies and their machinations are overcome. So listen for the rustling underpinnings, let your heart speak to you and go with your gut. Agh! Who can concentrate with all this noise??

VIRGO   (AUGUST 24 - SEPTEMBER 23)
Friends will lead you into all sorts of mischief, if you are lucky. Virgos can fill up their dance cards with some familiar friendly faces. Is there a gem in the trash? Who knows where it can lead? Dance the night away this week. Just don’t stay home and watch paint dry. Create plenty of memories with a certain someone who can help you paint the town.

LIBRA   (SEPTEMBER 24 - OCTOBER 23)
Libras are infused with a certain spark. Every move you make and even every fleeting whim is inspired and calculated to succeed. Certain powerful folks sit up and take notice. You may be poised for greatness and not even know it. Will you capitalize on this internal fire or just be content to toast your chestnuts for a while? Hey, whatever turns you on.

SCORPIO   (OCTOBER 24 - NOVEMBER 22)
It is difficult to sit home and contemplate your navel. There are too many exciting things waiting for you beyond your front door. Expand your horizons, learn a few new tricks and be open to exotic strangers. Scorpios need to get out and about to explore a few new watering holes. Who knows where love may hide? You may be surprised at how wet you get.

SAGITTARIUS   (NOVEMBER 23 - DECEMBER 22)
At heart you are a bit shy in love but there will be none of that this week. Your love life is whipped up to a peak. There is something electric and sexy about you now that attracts many admirers. Sagittarians are ready for action! Choose the best of the seven deadly sins (lust and gluttony?) and take them to the extreme. Just forget sloth!

CAPRICORN   (DECEMBER 23 - JANUARY 20)
Turn all your attention to partners in particular and relationships in general this week. What is and is not working? What else can you do to increase the excitement? Do something extravagant and bold to shake things up. Those single Capricorns who are fishing for a catch can locate the best pond now. And yet the quality of your catch will all depend on your bait.

AQUARIUS   (JANUARY 21 - FEBRUARY 19)
Work becomes more exciting than usual. You can find ways to  increase your productivity. This is an excellent time to get some long standing projects off your desk. Oh goody.... But before you feel like a rat on an ever speeding treadmill, channel some of that energy into productive, toning exercise. You can attract more diners with buff icing than with plain pound loaf.

PISCES   (FEBRUARY 20 - MARCH 20)
Pisces are ready and raring to play this week. You will have a choice of fun venues where you can let loose and dissipate. You can also channel this energy into an artistic course of action and get involved with something earth shaking. Unravel a puzzle, encounter a secret admirer or create a mystery yourself. Inspiration strikes! Or something like that.

For those of you who track the void of course moons through the months, here is July 2012. Read more about the definition of the VOC and see how they can improve your timing. And as you get more involved in the rhythms and flows of the planet energies, I highly recommend: Personal Development for Smart People: The Conscious Pursuit of Personal Growth. The author reveals the unvarnished truth about what it takes to consciously grow as a human being. As you read, you’ll learn the seven universal principles behind all successful growth and practical, insightful methods for improving your health, relationships, career, finances, and more.

A big thank you to renowned astrologer Felissa Rose for the charts.

THE FOLLOWING TIMES ARE EASTERN DAYLIGHT.  ADJUSTMENTS MUST BE MADE FOR OTHER TIME ZONES.

You can email Felissa at: felissarose@fairpoint.net or visit her website at www.accessnewage.com/felissa

Please help support this blog by ordering your astrology products