If you will be in NYC on July 15, join this interesting tour on the Bialystoker Synagogue which contains some wonderful paintings of the zodiac signs on its ceiling. 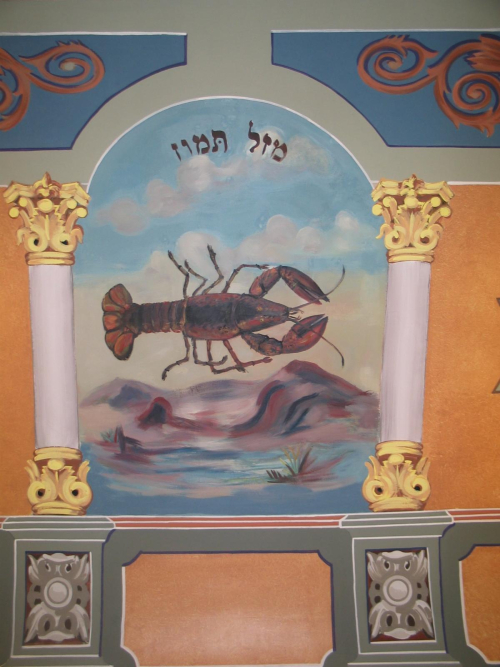 Join us for an evening tour of the magnificent Bialystoker Synagogue, which was built in 1826 as a Methodist Church, and believed to be a stop on the Underground Railroad. In 2016, Bialystoker was awarded 1 of 10 of America's Most Beautiful, Inspiring, and Unique Synagogues by the National Trust for Historic Preservation.

Marvel at this synagogue, resplendent in colorful murals showcasing Tiffany inspired stained glass windows. See it's ceiling covered with rare, hand-painted and treasured mazaales - representations of the signs of the zodiac. This is one of the few surviving examples left of what once were countless Eastern European synagogues boasting these depictions. Those synagogues (and their mazaales) were destroyed by Nazi forces.
The Conservancy is the only touring organization with access to
this site and a portion of the proceeds are returned to the synagogue.
This sanctuary is large and holds 1,100 people, so there is plenty of room to spread out.
Tickets are $16 in advance, with an additional $3PP when bought at the door.
Registration and More Information

Occultism in America - May 5 at 1pm - Free Program

YIVO is offering a free lecture on May 5 at 1pm on B. Rivkin  on Occultism in America. You can register here.

“WHAT DOES YOUR DREAM TELL YOU?”: B. RIVKIN AND YIDDISH OCCULTISM IN AMERICA

The writer B. Rivkin (Borukh Avrom Weinrebe, 1883–1945) is known to scholars today as an important anarchist thinker. Less known is that Rivkin was also a firm believer in the occult who attended spiritualist séances and speculated about the possibility of telepathic communication. Over the three decades of his literary career in the United States, Rivkin published hundreds of articles on occult topics, edited a short-lived Yiddish journal devoted to the development of latent inner powers, and published a weekly psychic dream interpretation column in the newspaper Der tog in the early 1940s that analyzed dreams submitted by readers. In this talk, Sam Glauber-Zimra will uncover this forgotten side of Rivkin’s literary career. Utilizing materials preserved in Rivkin’s archive at YIVO, he will trace the significance of the occult for Rivkin and his Yiddish-speaking immigrant readers as they navigated religious change and the crisis of the Holocaust.

Samuel Glauber-Zimra is a PhD candidate in the Goldstein-Goren Department of Jewish Thought at Ben-Gurion University of the Negev. His dissertation, “Occult Modernities: Hidden Realities in East European Jewish Culture, 1880–1939,” examines the various expressions of modern occultism within the popular culture and religious thought of Eastern European Jewry and its diaspora in the late nineteenth and early twentieth centuries. His most recent article, “Writings on Spiritualism from the Archive of R. Eliyahu Mordekhai Halevy Wolkowsky” appears in the journal Kabbalah, and he is the co-editor of Hillel Zeitlin, In the Secret Place of the Soul: Three Essays (Jerusalem: Blima, 2020) [Hebrew]. He is the 2021-2022 recipient of the The Rose and Isidore Drench Memorial Fellowship and the Dora and Mayer Tendler Endowed Fellowship in American Jewish Studies.

When using this system, it is believed by some that you can glean new, underlying meanings from words... and there can be many meanings. Using the Gematria calculator and typing in the words "I Love You", you get the following top meanings:

How much is I love you in Gematria ?

You can see how some meanings are a little weird! Or maybe that was part of Apple's marketing plan to begin with!

Another fascinating article from Atlas Obscura - 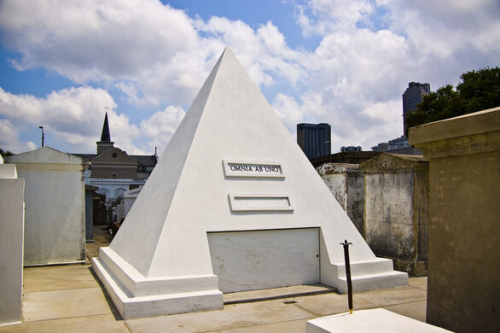 Nicolas Cage has a history with the city of New Orleans, having purchased the infamously haunted LaLaurie Mansion, historic Our Lady of Perpetual Help Chapel, and now an unnamed tomb in the city’s beloved St. Louis Cemetery No. 1, home to the grave of another of New Orleans’ supernatural heavies, Marie Laveau. Is the pyramid a nod to the National Treasure movies? Or is it a tip-off to his alleged ties to the probably-fictitious secret Illuminati society? We may never know.

Centuries after the Spanish colonization of Latin America, this form of folk healing emerged as a combination of the traditional healing practices of Aztec, Maya and Inca people, and foreign Catholic rites. Called curanderismo, it derives its name from the Spanish verb curar, or “cure,” and has served as an antidote to illnesses that were often believed to be punishment meted out by displeased gods. Practitioners are referred to as curanderos and they are active even now, offering herbs, prayers and massages to followers across Central and South America, the U.S. and beyond.