Poem About Tarot on the NYC Subway 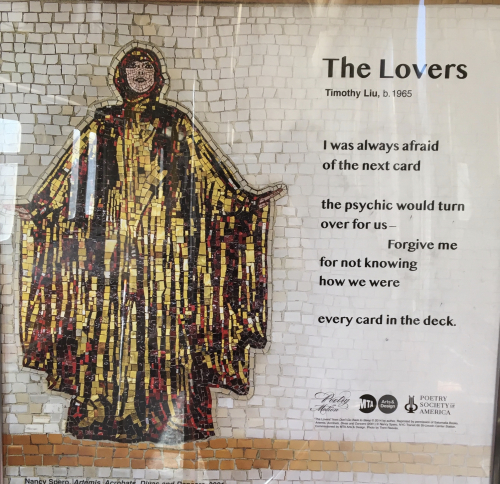 I am a big believer in the ability of tarot to help clear our minds of any static and focus on the issue at hand. This article in Salon magazine highlights all of the benefits of tarot in building clarity and even creating a stronger communication between people.

Tarot helped me take advice from my mother

Our relationship hasn't always been easy. For a long time, tarot was one more thing I didn't understand about her

My mom deals out the next three months of my life from a stack of blue cards. She flips over the line of cards one by one revealing five of cups, ace of cups, eight of wands, the Emperor, two of cups, the World upside down, and three of pentacles upside down. She examines the cards, pausing on the upside-down World. Her fingers trace the wreathed oval. She picks it up. "That's what you have to know about the cards," she said. "If it's upside down it doesn't necessarily mean it's negative."

My relationship with my mom hasn't always been easy. For the longest time, tarot was one more thing I thought I would never understand about her. Tarot is a mystical guiding system that has been used throughout history for fortune telling. The cards first emerged in Europe in the 15th century and were used simply for card games. The use of tarot cards in divination came into usage during the 1700s and have since been connected to the occult and mysticism around the world. Recently, tarot and astrology have become popular with millennials, along with other New Age spiritual practices.

When my mother first got into tarot, I kept my distance. I believed there was no realistic explanation for predicting someone's life through a deck of cards. Then one day, during the pandemic, driven half out of boredom and half out of the certainty nothing could be weirder than what we were already living through, I asked my mom to give me a reading. It was startlingly accurate. Over the course of the next year and a half, I asked her for readings on a regular basis. She predicted the outcome of various periods of time in my life and gave me advice based on her readings, which were not only accurate but insightful.

In a tarot reading, the participant asks a question, and the reader will flip over a series of cards, interpreting an answer based on each card's meaning. Usually, I ask for a three-month overview of what is in store for me. My mom examines the cards, pointing out their meanings as she works to build the overarching message in response. After reading the cards and evaluating the relationships they have with each other, she fits the message into the context of my life.

Read the rest of the article here.

There are so many excellent books for those of us who are interested in New Age, Occult and all related subjects. One recent example is Tarot for Change: Using the Cards for Self-Care, Acceptance, and Growth by Jessica Dore.

Here is one rave review-

“An instant classic, a must-have for every tarot enthusiast, and a manifesto for insightful living.” —Chani Nicholas, astrologer and author of You Were Born for This

Though tarot is often thought of as a tool for divination and fortune-telling, it also has deep roots in spirituality and psychology. For those who know how to see and listen, the cards hold the potential to help us better navigate the full spectrum of the human experience.

In Tarot for Change, Jessica Dore divulges years of hard-won secrets about how to work with tarot to better understand ourselves and live in alignment with what’s precious. Dore shows readers how to choose a deck, interpret images, and build a relationship with the cards, while also demonstrating how the mythic imagery of tarot supports modern therapeutic concepts like mindfulness, acceptance, and compassion. Her reflections on each of the seventy-eight cards are a vibrant tapestry that weaves together ideas from psychology, behavioral science, spirituality, and old stories, breathing new language into ancient wisdoms about what it means to be human.

This is as much a book for those who are new to tarot as it is for those who have worked with the cards for years. And it’s a book for anyone interested in exploring what it means to experience joy, heartbreak, wonder, stagnation, grief, loneliness, love. A book of secrets, symbols, and stories, Tarot for Change is a charm for remembering that our problems are not new, we are never alone, and whether we know it or not, we are always in a process of change.

The New Yorker Magazine ran a humor piece on Tarot called Questions My Tarot cards Refuse to Answer. I particularly love this card: Are you stumped for a great gift idea this year? Here is my list for a range on interesting and illuminating experiences for a very special person in your life ... including yourself.

Study to be a Medium with

Psychic Empath: Secrets of Psychics and Empaths and a Guide to Developing Abilities Such as Intuition, Clairvoyance, Telepathy, Aura Reading, Healing ... to Your Spirit Guides (Spiritual Development)

Learn about Aromatherapy with

The Complete Book of Essentials Oils and Aromatherapy, Completely Revised and Expanded: Over 800 Natural, Nontoxic, and Fragrant Recipes to Create Health, Beauty, and Safe Home and Work Environments

Enter the world of Astrology with

Astrology for Beginners: How to Learn Astrology, the Complete Manual to Discovery Horoscope and Zodiac Signs

Reiki Training Manual: The only Reiki Manual you will need to Learn, Practice and Teach Reiki from 1st Degree to Master Teacher Level

Treat Yourself (Or Others) to a Reading