Do You Love Baseball?
Two Podcasts - The Countdown to Spring Training Has Begun! 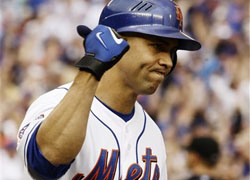 The Mets held a conference call on Thursday confirming knee surgery had been performed on Carlos Beltran but indicated proper process was not followed because they were denied the right to seek another opinion. On Thursday Night Beltran told his side of the story.

The Met centerfielder issued the following statement in regards to the story:

I am totally surprised by the reaction to my recent knee surgery. Any accusations that I ignored or defied the team's wishes are simply false. I also spoke to Omar Minaya about the surgery on Tuesday. He did not ask me to wait, or to get another doctor's opinion. He just wished me well. No one from team raised any issue until Wednesday, after I was already in surgery. I do not know what else I could have done. The most important thing here is that the surgery was a total success and I expect to be back on the field playing the game I love sooner rather than later."

I must say this story gets stranger with each passing moment but it seems from the way the planets have lined up here Beltran did nothing wrong and it appears to speak to a lack of communication inside the Met organization. And we are talking about important communication here regarding perhaps your best player and one you have a considerable financial investment in both this year and next year.

One thing for sure here is that the relationship between Beltran and the Mets must be repaired because he is essential to the success of this team in 2010. It seems like the surgery was the right thing to do and it also appears both the Mets doctors and Beltran's physician agreed on the course of action so why seek a third opinion?

I also think if Minaya spoke to Beltran on Tuesday wishing him well, that would certainly indicate the Met brass knew about the surgery and were willing to go along with it. Maybe the issue here is not everyone involved was aware of that sign off which is incomprehensible in this era of instant messaging, E-Mails, and blackberries. Nonetheless, communication can still break down and I could give the Mets a pass if they hadn't indicated otherwise in Thursday's conference call. It speaks to an organization with frayed lines of command making definition of roles almost impossible to discern.

And when you are talking about crucial issues like medical decisions on your $117 million investment, communication needs to be airtight or at the very least, accurate when you address the media. For Met fans, the hope here is the organization can mend the fences that were knocked down in the last 48 hours with both Beltran and his agent Scott Boras who, like it or not, has a roster of clients that could make or break a high profile franchise like the Mets in future years.

So far, the 2010 season is sounding a lot like the 2009 season but this organization has the power and resources to change that because there is talent on this roster. But those talented players need to trust their bosses whether that means Jerry Manuel, Omar Minaya, or the team's medical staff. That trust appears to be tenuous at best these days and that must improve if this organization is going to erase the painful ride of the 2009 season.