With Bay in Fold, What is Omar's Next Move?
Beltran Out 10-12 Weeks with Knee Surgery

Is Delgado A Viable Option for the Mets? 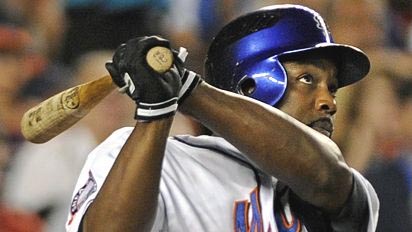 Flushing, New York-- Throughout the off-season, I got the feeling that the Mets wanted to move on from Carlos Delgado and go with Daniel Murphy as the team's first basemen. In the past couple of weeks, I am sensing that Delgado may have emerged as a option for Omar Minaya.

A number of Met scouts are traveling to Puerto Rico this weekend to take a look at Delgado who is playing in the Puerto Rico Winter League and I am told they are much more interested in his mobility as they are in his offense. The team always said last year that they were not worried about his bat and any fears that they might have had in that regard were likely curtailed after his home run in the Winter League on Thursday.

Still, they need to see his mobility at first base and up until now, Delgado has only served as a DH. Even if they are satisfied with what they see, the questions remains is how much are the Mets willing to pay? I would think the answer to that lies somewhere between what Troy Glaus signed for and what Vlad Guerrero ends up getting. That number should be somewhere between 4 and 5 million and a deal like that makes more sense now than it did a month ago since now Jason Bay is signed, sealed, and delivered.

The reason for that is Delgado would be viewed as a complimentary piece to the lineup and could create a pretty devastating Met order if he is healthy that would include Reyes, Beltran, Wright, Bay, and Francoeur not to mention Bengie Molina if he were to be added as well.

The pursuit of Delgado could also motivate the Molina camp to re-think their current contract negotiations which seem to be in a holding pattern right now. More importantly, it could give the team a lineup that has as much depth as any team in the league, including the Phillies. It might also allow them to shop Daniel Murphy which might make a deal for a starting pitcher more attractive than any deals currently on the table.

So, this weekend's hunting trip for the Mets scouting staff could have a domino effect on the rest of the team's off-season plans. Only time will tell.

No matter what team you cheer, any baseball fan will love these Baseball Fan Gift Ideas