What Will The 2010 Met Bullpen Look Like?
Reyes Set To Resume Baseball Activities 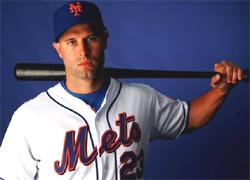 Port St. Lucie, Florida -- For the past few weeks, it seemed that Jerry Manuel had two options for the final spot on his roster--the power hitting Mike Jacobs or the more versatile Frank Catalanotto. That is until Chris Carter started smacking balls all around almost every ball park the Mets have invaded in spring training. "He is making a real bid that's for sure and we have a spot for a pinch hitter that's is open. His at bats have been very impressive and he is making a real case for himself. He is in the mix," said Manuel after Carter's second straight three hit game, this time in Viera against the Washington Nationals.

Carter is also one of the more interesting players in camp as he has an intensity that might be better suited for football and even Jerry Manuel has nicknamed him "The Animal". He is generally one of the first players to hit the weight room in the morning and that has caught the manager's eye as well. The one drawback to his game is he has not really found a defensive position but he insists that's not a problem saying, "I will play wherever they want to play and pinch hitting is no problem--I know how to stay sharp."

The willingness to do that could be a key component here as Jacobs has indicated he still thinks he is an everyday first basemen and might not be willing to be merely a pinch hitter. Neither Catalanotto nor Jacobs have hit the ball with the authority we have seen from Carter and that has certainly put him on Jerry Manuel's radar.

There is a lot to be said for a hungry player who has spent more years riding minor league buses than most prospects and one that might be at that crossroads that all minor leaguers are forced to face--make the show now or move on. And this fiery left handed hitter is clearly not willing to face that just yet.

With opening day just under 2 weeks away, Chris Carter is now in the conversation of earning a spot on the Mets roster. With the door creased open for him, I would not bet against him making it especially if he continues hitting the ball the way he has from the moment he arrived here in Florida. And if Jacobs and Catalanotto continue to struggle at the plate, they might both run the risk of being on the outside looking in 2 weeks from today.