2011 Mets Might Be Better Than You Think
Are The Wilpons Getting A Fair Shake From The Media?

What Is The Truth About The Met Finances? 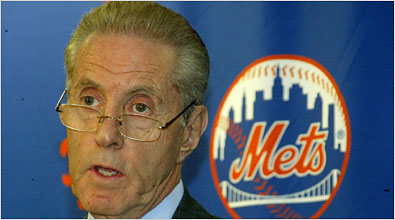 The news came out this past week that the Wilpons may be looking at taking on a minority partner to increase their cash flow in the wake of pending litigation surrounding the Madoff scandal.  As often happens with these types of stories, all of the media scribes turn into financial experts who now have the ability to see through the trees explaining what happened and how the Wilpons are to blame for everything that is bad in this world.  I am no expert in finances (as can be readily seen by examining my net personal worth) but in talking to some people that are indeed qualified to speak on finances, the issues here are complex and certainly not clear cut.

I have covered the Mets since 1982 and I must say my dealings with both Fred and Jeff Wilpon have been pleasant, professional, and always courteous.  Fred strikes me as a man who cares deeply about family and more importantly, the quality of life for all of his employees.  They desperately want this team to win and I do not think Met fans understand how the losing affects them.  It is crucial to understand here that Bernie Madoff was a  close personal friend of the entire family and the betrayal the Wilpons must have felt is hard to even quantify.

This was not merely some broker who swindled investors--it was someone the family trusted as you or I would our very best friend in the whole world.  This does not absolve the Wilpons of any responsibility in all of this but it might explain why it happened.  And at the time the scandal was uncovered, they were asked if it would affect the team financially which they denied.  They are now being villified for that but I think that criticism is misdirected.

It stands to reason that the financial pressure they are currently under is a direct result of the law suits which recently came to the forefront.  And lets speak the truth here--the team operated business as usual last year maintaining one of the higher payrolls in the sport despite a so-so season and lower than expected attendance figures.  So, I do believe the Wilpons here that this is a recent economic shortfall and seeking a minority owner is a potential solution to alleviating the cash flow issues.

And for the record minority owners are very commonplace in sports these days--just look across the Whitestone Bridge where the Yankees have routinely had minority owners throughout their history.  In fact, the Wilpons 100% ownership is the exception rather than the rule in the high-priced game of sports franchise ownership.

Being a Met beat reporter for the past few years, I know the plate spinning act of "kicking a dog when he is down" and that is fair I guess when it comes to on the field stuff.  Nobody was more critical of Jerry Manuel than me last year and so I understand the dynamic.  But no one on the beat (no matter what they might tell you) is privy to the finances of the Wilpons and so anything you get, should be taken with a boatload of salt.  There are also people who may have an ax to grind with the Wilpons for other reasons and so they will present a slanted view as well.

I am not saying believe me or believe them--I am saying make up your own mind but understand that there is still much to this we do not know and may never know.  But I do know this--the Wilpons have acknowledged they will pay out a huge sum of $ to Madoff victims--you can infer that by them using the word "settlement" instead of "litigation" in their statement to the press.  And that prospect has forced the family to seek alternate revenue streams because of how much they want to win in this town.

And that's the  back page piece to this story--I will leave the financial pieces and legal questions to those much smarter than me.  I know it's outrageous to think we should wait until all the details of a story come out before we jump to any conclusions.  And I know patience is not a virtue of the New York media who would often rather be first and wrong than second and right.  Journalism 101 teaches you the latter but somehow in this town we have all forgotten that lesson.