Harvey Day Was Just What The Mets Hoped It Would Be 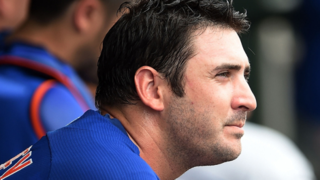 The New York Mets could not have asked for a better day. Matt Harvey took the mound and threw 6 scoreless innings and their offense put 6 runs up on the board as they took 2 out of 3 from the Washington Nationals.

Matt Harvey has undeniably brought life and purpose into the Mets organization and believe me the rest of the National League has noticed. He faced 23 Nationals in his start and threw a first pitch strike to 20 of them--that my friends is off the charts for any pitcher but for one coming off Tommy John surgery it is downright amazing.

Bryce Harper has commented the last few days that he thought the Met pitchers were tough but he might want to redefine that word as he was struck out 3 times by Harvey and in each of them he was overpowered by the stuff of the Met pitcher.

In Spring Training Harvey was absolutely dominating but we all know that is just Spring Training. The bell rang today and Harvey looks absolutely as dominant as he looked in Port St Lucie. Let’s remember the Mets lost 14 of 19 to this Nationals team and in last 4 years were 16-42 against them. But Harvey in 4 career starts versus this team has pitched 27 innings to a 1.00 ERA walking only 7 while striking out 35.

But Matt Harvey is about more than just the numbers. He provides this team with a mindset about winning in much the same way Tom Seaver did in the late 60's. Now he has a long way to go before he comes close to Tom Terrific but the comparison is obvious--this team has been down for so long it needed a talented, confident, no-nonsense ace pitcher to lead the way. And they have that.

The season is still in its infancy stage and there is so much baseball to play but the way Met fans and New York in general followed every pitch today shows how far the star power of Matt Harvey has risen. There is no player in New York on either side of town that commands the coverage of the media and that intense coverage will only grow as the season progresses.

But more importantly, when you walk around the Met clubhouse you can see how much confidence Matt Harvey has bred inside the minds of players who wear The Orange And Blue. I have not seen anything in this clubhouse like that since the days of Keith Hernandez. Even on a day when the Mets took a series from the Nats, there was no tough talk no bravado--there was knowledge that there is still much work to do and this was merely a minor Step #1

A step taken with the help of a young man who is poised to lead the Mets into success and also ready to take New York much in the way #41 did some 46 years ago. It will great to watch and for Met fans they got a small taste of that on a cloudy April DC day.