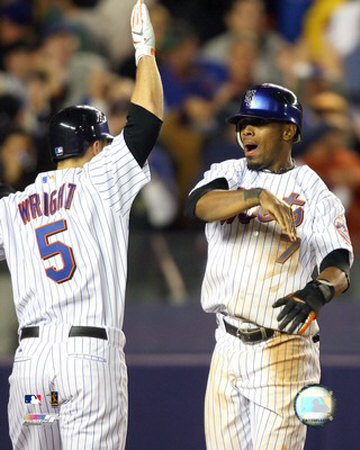 When you bring up the topic of the 2011 Mets,most baseball experts say they are a .500 team at best and were even picked to finish last in the NL East in some circles.  I say stop the insanity--they were pretty much a .500 team last year without some of their core parts and with a new manager, you have at least give Terry Collins a chance to put his stamp on this team.  Sandy Alderson has assembled a very impressive roster in the front office whose baseball acumen might very real re-define the "mission statement" of the team.

The team does have question marks and will reside in a division that houses some of the best pitching in the sport.  The strategy to stay put, evaluate what you have, and wait until you have more economic flexibility is a sound one which should not be surprising knowing what a solid baseball man the new GM is.  And my sense is there is serious talent on this roster--I mean All-Star caliber talent like Wright, Reyes, Bay, Beltran and K-Rod and budding stars like Angel Pagan and Ike Davis.  This team will hit plenty even in spacious CitiField and so the 2 big questions will be: Is there be enough starting pitching and who is the bridge to K-Rod?

One scout told me, "If Young does for them what Dickey did last year, they will be OK especially if Pelfrey duplicates 2010 and Santana returns for the second half.  They will hit and they are pretty solid defensively."  The 8th inning question is a tough one but not an uncommon issue around the league--that is why the Yankees paid so much for Rafael Soriano.  So, the rotation is the rub here and more specficially, how they perform on the road where the Mets lost in walk-off fashion too numerous times to mention a year ago.

Many experts pinned that on the bullpen but you could make the argument that an anemic offense put the team in those positions due to the loss of injured players.  And then there is the question of in-game managing.  It is no secret that I was very critical of Jerry Manuel and the way he handled this team but let me be very clear--I personally liked him alot and always said that I'd want him to manage my son in high school or college but at this level, I think he misstepped quite a bit.

Terry Collins will do a better job of communicating roles to the players and will do less tinkering with the lineup.  This is a group that needs that and needs to play with passion.  My sense is that Jerry sometimes tried to think too much "out of the box" when a simple approach would have served the team better.  Trying to bat Jose Reyes not once but twice indicated to me his stubborness clouded his judgement and in the 2009 season his opposite field hitting drill proved counter productive especially with his big power hitters.

When I look at this team its pretty simple, Reyes is the catalyst, Wright is your fulcrum, Beltran when healthy is your best all around player and Jason Bay, aside from last year has been an RBI machine.  Pagan and Davis are great complimentary pieces and so what will decide the Mets fate is health and starting pitching.

Which makes them very similar to a handful of NL teams aside from the Giants and Phils.  Lets remember the Mets were 10 games over .500 midway through the season last year before that fateful West Coast trip after the break which for all intents and purposes, ended their season.  With a little luck, (which they are overdue to receive) they just might surprise the naysayers.