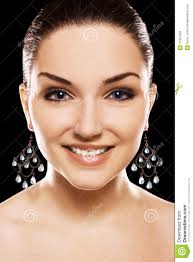 I love earrings.I feel undressed if I go out with my lobes bare.I don’t wear large earrings nor fake emeralds nothing gaudy,just simple pearls or silver or gold buttons.Earrings complete a costume.Well about eight months ago I was getting ready to go out. I dressed my left ear with one pearl but I could not insert the other pearl in my right ear.I pushed and twisted but to no avail.Well that is that I said to myself and so for eight months I lived with bare lobes.It bothered me and every so often I tried pushing and twisting .

Then last week I decided to buy a pair of clip-ons. Since I am quite blind, although I do see shadows,the idea of walking into a jewelry shop and feeling around the jewelry counter and buying something that  feels right or to ask my aide Ferida to select a pair of earrings for me doesn’t appeal to me.I had spent enough time  trying to push an earring through my right ear, I had drawn enough blood,my earlobe was red and sore, I decided to call this nonsense quits.

I am ninty five years old what the hell am I doing?But I couldn’t let go and this morning I said to Ferida’’Get my coat we are going out’’where she asked, its only ten o'clock “never mind”I said. I knew exactly where but I knew she would give me an argument. Ferida has been with me too long for me to tell her to stop  acting like she is my nanny . I’m not as sharp as I was or I would have figured out what to do eight months ago.

Riding down the elevator to the lobby I said good morning to the doorman he responded “good morning Mrs Frank”adding “isn’t this rather early for you”. His was a valid question as no one in this building has ever seen me befor noon in the forty years I’ve lived here.When Ferida and I were on the street I said to her “ we are going to a little jewelry store next to my hair dresser. There is a sign in the window that says we pierce ears. I am so angry I never noticed it and that’s where we are going.”What she said, her voice rising to a squiek, “what woman of 95 has her ears pierced? It’s dangerous it’s cutting into your skin.” “Ferida,shut up.”I took her arm,lets go I said  practically dragging her as I do my dog Molly when she won’t budge.”Ok” she said somewath mollified by my explanation.”But let’s call your doctor for his permission”I din’t respond but yanked her arm and we walked two blocks to the little jewelry shop next to my hairdresser.

We entered the little shop. A man behind the counter looked at Ferida ,smiled and asked her if he could be of help.I did not give her a chance to answer by now I was revved up. “I would like to have my right ear pierced,it closed.” “That’s not unusual Madam” he said, “it can close overnight it happens when one is past fifty.”I felt better when he said that and so he pierced my ear inserted a sweet tiny gold trial post and placed one in my left ear for balance telling me I must wear it for one month.”Now you are all set Madam” he said. “Thank you sir” I said, paying him the forty dollars. I took Ferida’s arm and as we were leaving the shop I smiled I was happy and I felt rather pretty.