Cat Says I Missed You Too ....
Priceless 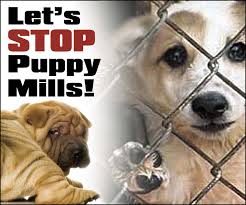 Finally some good news regarding those heart breaking puppy mills. According to the Humane Society, the USDA recently finalized a rule prohibiting the import of young puppies into the US for resale. Here is the letter I recently received on the subject:

I have great news to share with you today: the U.S. Department of Agriculture has finalized a rule prohibiting the import of very young puppies into the United States for resale from foreign puppy mills. This is a major advance for dogs, pet parents and for animal advocates like you who have worked for decades to end the import of dogs bred in foreign puppy mills and sold to unsuspecting U.S. pet owners.

Over the years, we have heard hundreds of sad stories resulting from this indiscriminate import and sale of puppies, like bulldog puppy Otis and teacup Maltese puppy Tink. Read Otis and Tink's stories, plus more about this historic news, on my blog»

This is a long-awaited victory for us at The HSUS. We started the process in 2008, when Congress passed the Farm Bill with an HSUS-backed provision to stop puppies bred in foreign puppy mills from being imported into the United States for resale. It took six years for the USDA to finalize the rule implementing the ban, but today we have a strong outcome on the issue and will finally stem the tide of sick puppies coming into U.S. airports, some of them dying in long-distance transport for resale.

With the advent of global commerce -- and what we've seen in the form of trade with exotic animals, ivory and rhino horn and factory farming -- this ban comes just in time to prevent a massive influx of puppy mill dogs from China, eastern Europe and Mexico.

This is the second leap forward that the USDA has taken to protect puppies over the last 12 months. Last September, the agency finally passed another HSUS-backed rule that brings internet puppy sellers under the Animal Welfare Act regulations and requires them to be federally licensed and inspected. That rule went into effect last November and will finally bring standards of care and oversight to thousands of online puppy mills.

Again, this significant step forward would not have been possible without your help. Thank you for all you do to help animals.