The Most Pet Friendly Cities
Traveling With Your Pet

Japan Has A Cat Cafe Train

Cara Giaimo writes for Atlas Obscura about a wonderful adoption effort going on in Japan - a Cat Cafe train. 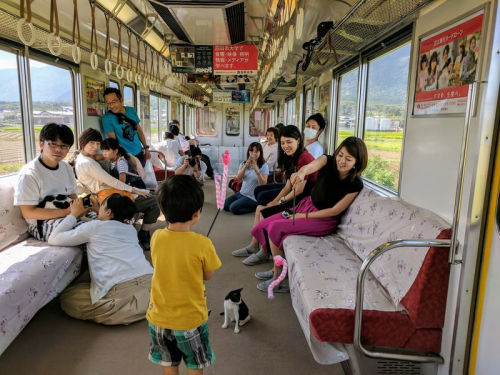 On Sunday, September 10, Bill Adler and a few dozen fellow travelers rode on one of the cat café trains. They were joined by about 30 rescue kittens, which spent the trip climbing the legs of besotted passengers, running back and forth on train benches, and napping on laps. Adler traveled about 90 minutes outside of Tokyo to hop this train, which left from the small city of Ōgaki. He is quite familiar with cats—he has one himself—as well as with his adopted country’s love for cat cafés, in which patrons drink tea and eat cookies while surrounded by felines.

But he was too curious to pass this opportunity up. “We all wondered what it was going to be like—this vision of a train and cats,” he says. “How was it going to work out?” Quite well, it turns out. Unlike the older, often lazier cats that lend stationary cat cafés a lounge-like atmosphere, the train kittens were in perpetual motion. “They were so light and little and curious about everything,” says Adler. Three kittens circled one woman for nearly the entire ride, clambering all over her. Another passenger spent hours cradling a tiny black cat to his chest. The two-and-a-half-hour trip flew by. “In Japanese, one very popular word is kawaii, which means cute,” Adler says. “That word was more appropriate on this train ride than any other place I’ve ever been. It was awesomely cute. It was just wild!”

The cat train was a collaboration between a local NGO, called Kitten Cafe Sanctuary, and the train’s owner, Yoro Railway Co Ltd. The NGO hoped to promote stray cat adoption, while the transportation company aimed to jumpstart tourism to Ōgaki and the destination city, Ikeno.