Help The Buffy-Tufted_Ear Marmoset
A Guide to Israel's Fabulous Birds 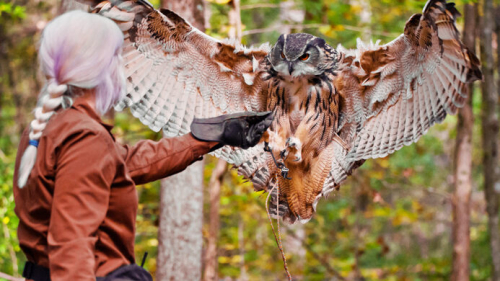 From golden eagles to peregrine falcons, this rehabilitation and education center is a haven for birds of prey.

In 1975, an injured broad-winged hawk found its way to Dr. Richard Brown, an ornithologist at the University of North Carolina at Charlotte. Along with several biology students, Brown helped the bird back to health and released it into the wild—it would be the first of many rehabilitations.

Over the years that followed, more and more birds were brought into the makeshift clinic in the basement of the university’s biology building. In 1980, Brown and Deb Sue Griffin, one of his students, decided to make things more official. Together they founded Carolina Raptor Center, which has admitted some 20,000 birds over the last four decades.

In 1984, the center moved into a new home inside Latta Nature Preserve, which spans more than 1,400 acres. The preserve offers opportunities for hiking, horseback riding, and paddling in the waters of Gar Creek and Mountain Island Lake.

Around 60 percent of the raptors admitted are rehabilitated and then released back into the wild. The birds that cannot be released become permanent residents at Carolina Raptor Center or another facility that can care for them.

Over the years the center has grown in size and complexity—helped along the way by the 300+ Boy Scouts who have completed Eagle Scout projects on its grounds. Today the center is home to 85 permanent resident birds from all over the world, many of which can be seen from the Raptor Trail that encircles the center. One of the highlights of the trail is the eagle aviary, where visitors can take in the impressive sight of golden and bald eagles. Other species on display include a peregrine falcon, red-shouldered hawk, spectacled owl, and turkey vulture.

In 2016, the center began a project that will expand its educational offerings and ability to care for injured birds of prey. This includes Quest, a newly-built facility that will house both the Latta Nature Center and Carolina Raptor Center along with exhibit space, indoor classrooms, and an amphitheater.

Carolina Raptor Center is open Wednesday through Sunday, from 10 a.m. to 4 p.m. Tickets are $12 for adults and $8 for children. Check the website for more information.

Note: Erosion prevention measures make the trail inaccessible for most powered wheelchairs, but the Visitor Center is wheelchair accessible.