Amazon just sent me very interesting and best selling items for our blog. I would like to share these with you. 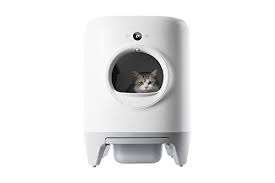 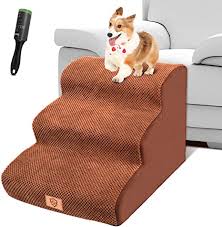 The Value and Importance of Dog Drying Cages 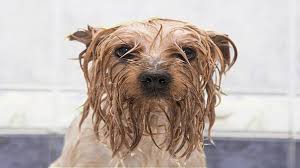 Helene Petersen of KVP Orthotics  offers her views on the value of Drying Cages especially for long haired dogs. There are profession grooming businesses that can find benefit in them and there are smaller drying cages (for dogs and cats) that you can use at home after bath time.

Dog Drying Cages- You Can Thank Us Later

There is no denying the fact that dog grooming is a form of art. And just like most art forms, it is painstakingly time-consuming. Ask any professional groomer, and they’d agree that it takes forever for any long-haired pet to dry after a bath. And it doesn’t take long for a pet with wet hair to get dirty again.

A simple solution to avoid this problem at professional grooming facilities is dog drying cages. Take a look at what they are and how they help-

What are Dog Drying Cages?

Dog drying cages are cages exclusively designed to dry pets after a bath. It is a highly efficient and safe alternative to use blow dryers, which might not be safe for pets or wait for hours for air drying. The cages can be attached with blow driers to dry the pets quickly.

The cages are available in many different configurations and can be customized as per your requirements. But only a handful of brands offer the customization option.

Here are some of the top reasons why professional grooming facilities should consider drying cages.

Needless to say, the most significant advantage of using cage driers is that they save a lot of time. Once a dog is groomed and bathed, he/she can be placed in the cage for drying. While the pet is drying, the groomer can start working on the next pet.

In facilities that receive a lot of paw traffic, this is an effective way for the groomers to multi-task. It also keeps the facility organized and clean.

It is not uncommon for pets to feel anxious or nervous in a grooming facility, especially if it is their first time. Once such dogs are groomed and bathed, it can be challenging for the groomer to hold them in a place for drying.

Dog drying cages can be very helpful in such cases. After the bath, pets can be placed inside the cage to make them feel more comfortable and calm. Nervous dogs can also be placed inside the cage before grooming or bath so that they feel more relaxed and safe. You can read this SitStay post for some more tips on how to keep dogs calm while grooming.

There are plenty of reasons that make dog drying cages an excellent choice for professional grooming facilities. Look for a reputed dog grooming supplier to browse through their range of cage dryers.

Helping Birds Before and During the Pandemic 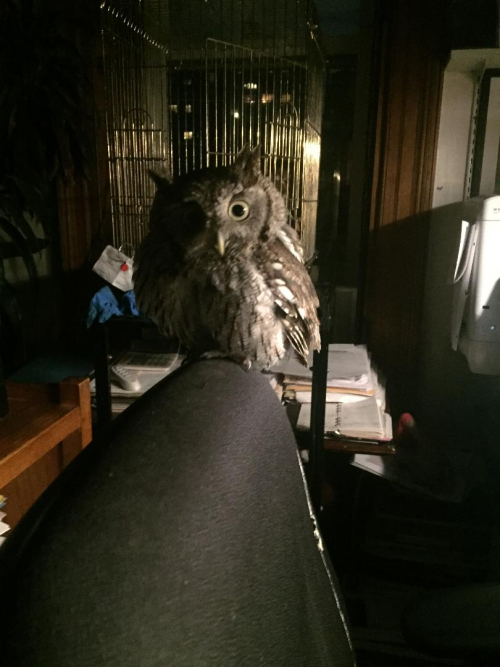 Rita McMahon is the Founder of the Wild Bird Fund, located in New York City.

The Wild Bord Fund is a one of kind organization dedicated to, as their website says, providing medical care and rehabilitation to native and passing migrant wildlife so that they can be released back into the wild. And to educate New Yorkers about the rich diversity of the city’s wildlife and how to help it thrive.

But that description is not totally complete. The center also rescues and rehabilitates domestic birds like the small family of ducklings and teh two chicken escapees from slaughterhouses who I saw when I recently visited. They also rescue bats and turtles. (A snapping turtle, who arrived by subway, is available for adoption...) Their services are especially needed now when climate change and over building is destroying wildlife. Rita McMahon, founder and director of the WBF has dedicated that past decade of her life establishing the center and expanding its services. The WBF will soon expand into Brooklyn and the Bronx as well.

Today, during the pandemic, Rita and the Fund are faced with an almost overwhelming challenge. She says, "The WBF is deemed an essential business by the Governor and the city. So we re open every day.  Much reduced staff, no volunteers, no visitors, no reception and people who bring in birds in need of help hand them over outside the door.  The number of birds is a little less than last year, but the donations are nowhere near the same.  Thank you for helping us continue."

She adds, "I am including a picture of Groucho the screech owl perch on my desk chair.  He is my late night companion, sleeps under my desk during the day."

We do not charge for our services, but a donation would be appreciated. Your generous donations allow us to continue our important work. Please help WBF keep NYC wild.

Plan Your New Year with a Pet Calendar

There is nothing more fun that having the perfect calendar to plan your new year. Here is a list of possible calendar gift ideas for pet lovers everywhere.

A Selection of Dog Coats 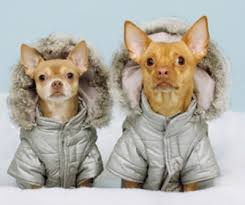 For those of us dog parents who live in cold January climes, here is a selection of dog coats. When the temperatures dip, it is good to know that everyone in the household has a warm coat: 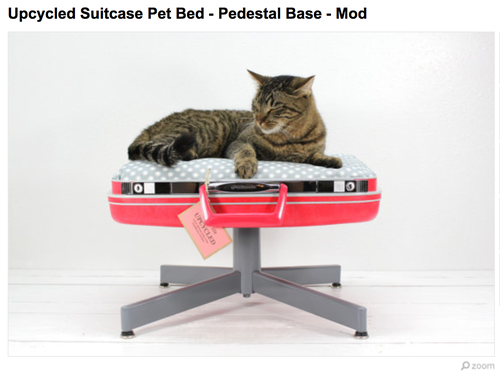 Here are some great gift ideas. 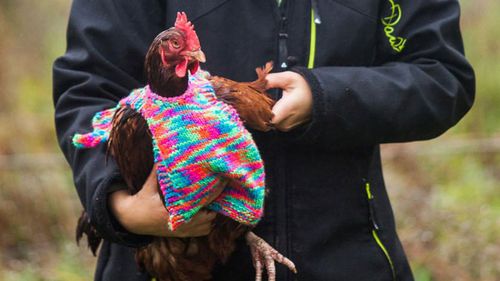 This from Lost in E Minor:

In Cornwall, England, 25-year-old Nicola Congdon keeps her rescued chickens warm by dressing them up in knitted wooly jumpers. Half of Congdon’s 60 chickens are former battery farm chickens, meaning their bodies have trouble acclimatizing to cold weather after having spent all their lives cooped up inside cramped cages.

So to prevent them from freezing during winter, Congdon and her mum, Ann, have come up with the tiny, colorful sweaters.

‘It’s important to make people aware of the poor conditions the hens live in and the fact that they have no feathers when they are retired’, Congdon told Mashable. ‘The tank tops are also something really different that provide some fun for the chickens. They keep them warm and makes the chickens easy to identify’.

And if that’s not kind-hearted enough, Congdon adds that the money they make from selling the tops to hen keepers go to an AIDS charity in South Africa. 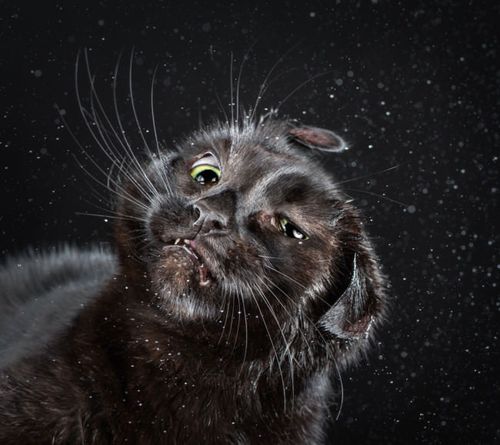 Cats are some pretty majestic creatures with their luscious fur and graceful demeanor. But Portland-based photographer Carli Davidson (previously) has come up with a photo series that shows us they can be goofy too!

Entitled ‘Shake Cats’, the series features felines photographed in mid-shake, seemingly bursting in a mix of water, fur, saliva, and wacky expressions. According to Davidson, she was able to coax her subjects into shaking by either petting them with a wet hand, or simply giving them a blissful ear cleaning. No cats were harmed during this process, though we completely understand if they went home a little grumpy.

The series took four years to finish and needed 100 cats to pose for her. 61 of these cats also happen to be rescues who got their portraits (ones that projected them in a more flattering light) taken to help boost adoption.

And if photos of wacky cats aren’t enough to get you to purchase Davidson’s book, a portion of the proceeds will help fund three Portland shelters where most of the subjects live in.

This is from Lost at E Minor 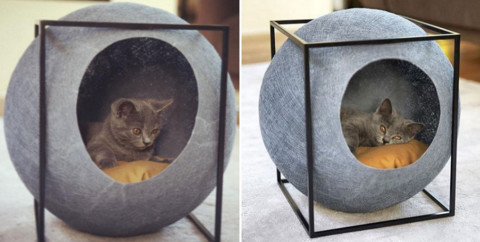 From Lost at E Minor -- Could this thing of beauty finally replace the cardboard box? Aude Sanchez and Guillaume Gadenne of design studio Meyou Paris have created a line of cat beds

that’ll get your feline off your sofa and into his own posh apartment.

The collection includes three beds: The BALL, The CUBE, and The BED. The first two feature a cocoon-like cotton bubble where your cat can sleep and sharpen its claws. The BED is a cave-like structure that offers your cat a vantage point to survey his kingdom (your house, basically).

The Meyou cat bed series is currently crowdfunding on Kickstarter, where it has so far raised – as of writing – €11,609 out of its €35,000 goal. Aside from getting your spoiled cat his own fancy place, pledging to the project will also help persons with disabilities find employment through manufacturing and assembling the products.

You can find out more about the Meyou cat beds here. 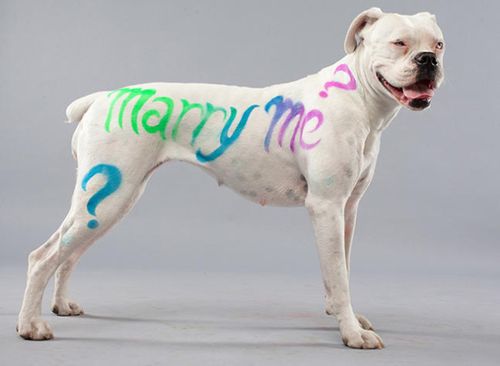 ABC's Shark Tank is a show where entrepreneurs pitch their latest and greatest ideas. Just recently someone pitched Pet Paint

where you can decorate your pet.

When Abe Geary pitched Pet Paint on Shark Tank he was ready for some choppy waters. Selling pet-safe, non-permanent, colored hair spray for dogs meant creating a brand new market. But Abe believed in his vision, the product was gaining traction with groomers and Pet Smart had agreed to start carrying PetPaint. Still, one of the Sharks threw him a curve ball that had a major impact on his time in the tank.

was doing online, Abe admitted he was focusing primarily on retail. This didn’t sit well with Cuban, who liked the product but decided to pass on the investment. “Where I have a huge, huge problem is that you weren’t able to see that online was your best solution,” he said. “To me that’s so obvious.”

“The biggest challenge, and the greatest asset, that we have is that it’s a new and exciting product,” Abe replied. “All the more reason why the web would have worked great for you,” Cuban countered.

That is when Barbara Corcoran stepped in. The self-made real estate mogul offered Abe $200,000 for a 60 percent majority stake in his business. Acknowledging Cuban’s earlier advice, she emphasized the online opportunity for Pet Paint

. “Your most obvious play here is the website,” said Corcoran. “That’s where your gold is.”

Ultimately Abe walked away from the deal, but he did take the Sharks’ advice. When the episode aired, PetPaint.com saw a huge spike in traffic and sales through their Bigcommerce store.