What Would The World Be Like If Men Were Treated Like Women
Too Young to Wed: The Story of Child Brides

Will Justice Prevail for Nirbhaya? 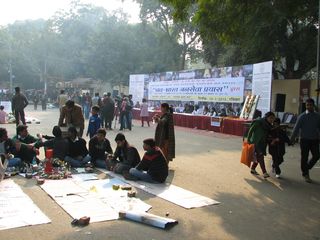 Four of the six men who lured a 23-year-old student onto a bus and then brutally gang raped her were to be executed as of four days ago and now, two days ago two of the rapists had their sentences stayed.

What is going on?

The Delhi High Court on Thursday afternoon confirmed death sentences for four men convicted of the heinous gang rape and murder of a medical student in the Indian capital. The incident sparked mass protests across the South Asian nation. A fast track court initially sentenced the four men to death in September last year. A fifth accomplice apparently committed suicide in his prison cell, while a sixth — a juvenile at the time of the attack — is serving a three-year sentence in a correction home.  Yet the four men on death row may still appeal to the Supreme Court, and failing that for Presidential clemency.

But then two days after the Delhi high court confirmed the death penalty awarded to 4 convicts for brutal gang-rape-cum murder of Nirbhaya, the Supreme Court stayed the extreme punishment for two in a special sitting on Saturday after one of them alleged that he was coerced to accept a lawyer chosen by police during trial.

A bench of Justices Ranjana P Desai and S K Singh stayed the HC decision to confirm the death sentence awarded by the trial court on Mukesh and Pawan Kumar Gupta after their counsel, M L Sharma, alleged that the advocate chosen by the police robbed the trial process of fairness. The bench stayed the execution of sentence till March 31.

On Thursday, the HC had upheld the trial court's decision to impose death penalty on Mukesh, Pawan, Akshay Thakur and Vinay Sharma. It said the gruesome manner in which Nirbhaya was gang-raped and mercilessly assaulted on December 16, 2012, which led her to death, was a crime that fell under 'rarest of rare' category warranting imposition of death penalty. Another accused Ram Singh had died during the trial.

This is an atrocity!

The Dec. 16 gang rape marked a watershed for the women’s movement in India and led to a new anti-rape law, which now makes even stalking and voyeurism punishable crimes

(Name is required. Email address will not be displayed with the comment.)