Daniel Kahn and the Painted Bird

Daniel Kahn and the Painted Bird is as close to street art music as I have found recently. Are they revolutionaries or counter-revolutionaries? You decide:

Homebase IV Project on the Lower East Side

The Forward newspaper reported on an unusual art exhibition which asked the question, if you were to send us a photographical part of your body, what would that be? It is called HomeBase and it is located in a dilapidated old medical clinic on Manhattan’s Lower East Side. HomeBase IV is a free exhibition and part of the 14th Street Y LABA Festival, in which a dozen former exam rooms in the medical clinic are the stage for artistic contemplations of personal and geopolitical identity. HomeBase project was founded in 2006 by artist and curator Anat Litwin. I see this exhibit as bringing art from the street into the gallery space .. or in the medical examination room as it were.

Iz The Wiz was a prolific graffiti artist plying his trade in New York City in the 1970s and ’80s. His work decorated the New York subways with a large “Iz the Wiz” tag. His work could be seen all over the subway system: fat capital letters spray-painted on a door, below a window, across an entire car or even along the full length of a train. Iz the Wiz was a legend among graffiti artists, by almost all accounts “the longest-reigning all-city king in N.Y.C. history,” as the graffiti Web site at149st.com puts it. In other words, Iz put his name, or tag, on subway cars running on every line in the system more times than any other artist. No small feat! Michael Martin — Iz the Wiz — died on June 17 in Spring Hill, Fla., where he had moved a few years ago. He was 50. The cause was a heart attack, said Ed Walker, who is working on a biography and documentary of Iz the Wiz. “Look at any movie shot on location in New York from the late 1970s to the early 1980s, and you will very likely see an Iz tag,” Mr. Walker said. “He told me once that in 1982 he went out every night and did at least a hundred throw-ups” — letters filled in quickly with a thin layer of color. “People can’t fathom it.” With the graffiti artist Vinny, Mr. Martin mounted an intensive throw-up campaign on the A line. In the late 1970s he branched out to other lines, spray-painting top-to-bottoms (graffiti displays extending from the top of a train to the bottom), burners (complicated works intended to dazzle the competition) and fully realized scenes, like his homage to John Lennon, painted after Lennon was shot to death in 1980. It was a two-car scene with a portrait of Lennon and a graveyard filled with tombstones. With the photographer Martha Cooper, Mr. Chalfant published Subway Art(1984), recently reissued by Chronicle Books, and made the documentary film Style Wars(1983), which included Mr. Martin in its portraits of graffiti and hip-hop artists. He also appeared in the role of a transit police detective in the cult 1983 film Wild Style. Mr. Martin was born in Manhattan and lived in a succession of foster homes after his mother was imprisoned for burglary. He did not know his father. He grew up in Ozone Park, Queens, and as a teenager lived in Covenant House on the Lower East Side. The street art world has lost one of its forefathers. Read his full obituary here. 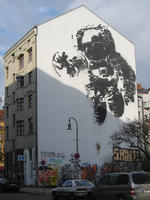 The Village Voice reports this graffiti based travelling art show. Check it out: J'Aime Graffiti BY ARACELI CRUZ Helenbeck Gallery curators and twin sisters Chantal and Brigitte Helenbeck have a distinct love for the French Revolution and contemporary art. So much so that they've decked out their galleries, based in New York and Paris, in certified antique Louis XIV furniture, crystal chandeliers, and the most radical graffiti works. This play on eras in Whole in the Wall: 1970–Now examines graffiti through this very comprehensive and traveling retrospective, from the local street-art pioneers of the '70s and '80s (Blade, Crash, Daze, Jonone, Quik, Lee Quinones, Rammellzee, and Sharp) to their contemporary European counterparts (Victor Ash, Banksy, Blek le Rat, Ikon, Sozy One. and sculptor Plateus). The group show also has photography pieces by Martha Cooper, Henry Chalfant, Jamel Shabazz, and Silvio Magaglio.

My list of the top ten best emerging artists blogs appeared on Blogs.com It was very tough to choose but my favorites are: 1. Art Brut and Outsider Art 2. The Arteur 3. The Wooster Collective 4. New-Art 5. Post Secret 6. Artists Who Blog 7. William Wray 8. Happy Famous Artists 9. Caroline Marine 10. Other Things

The Beauty and Grace of Pure Scrawl

There is something to be said for the pure essence of graffiti. The "scrawls" and short tags that seem to crop up everywhere. I have to admit that I like some of them and am unimpressed with others. But there are a few that have a wonderful lyricism and grace. Here are a couple of examples: 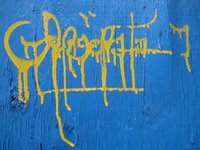 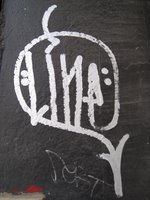 Trolling through the internet yielded these interesting graffiti based sites. In no particular order: http://www.kontraband.co.uk/pics/15790/Geeky-Grafiti/ http://www.terracycle.net/graffiti.htm 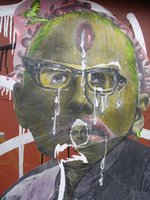 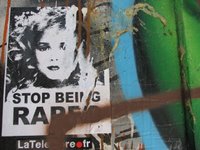 Jim Power is a legend in the East Village of New York CIty. His beautiful mosaics adorn public lamp posts, street planters and even stoops and doorways. Jim lives a precarious existence however, having lost his apartment and living on the streets for a time. We met him on the corner of First Avenue and 8th Street with his dog Jessie Jane. Jim showed us his "Rudy Guliani move" - the move he did in front of television cameras with then Mayor Guliani. (Jim is guy with the moustasche...) 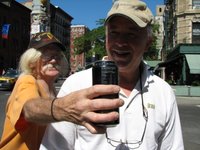 His art is amazing. Here are some examples but a better way to see them is to walk the streets of the East Village: 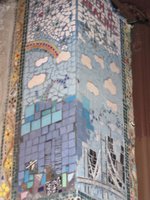 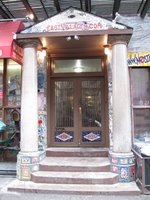 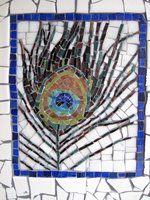 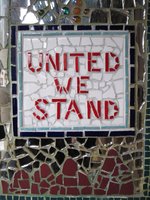