This just in from the LA Times:
The movie doesn’t appear anywhere in the Sundance Film Festival’s catalogue. Outside a small circle of ultra-secretive confidantes, nobody knows its director’s identity and whereabouts. And the film’s place in the Sundance schedule wasn’t even announced until last week. That hasn’t stopped acclaimed British street artist Banksy's “Exit Through the Gift Shop” from becoming Park City’s hottest ticket.

Outside Park City’s 446-seat Library Center Theater, Banksy fans started queuing up hours before “Gift Shop’s” 8:30 p.m. screening in 15-degree weather, even if their chances of getting in were slim. The screening, which was also a sales event for the film’s representatives, Cinetic Media, felt more like a feverish night club, with Jared Leto, Adrian Grenier and uber hipster Danny Masterson (of “That '70s Show”) in the packed house.

A film-within-a-film that begins as a chronicle of guerrilla art and its most prominent creators but morphs into a sly satire of celebrity, consumerism, the art world and filmmaking itself, “Exit Through the Gift Shop” is a nearly impossible work to categorize. That doesn’t begin to describe the contradictions that surround the new movie that’s both about -- and made by -- the controversial and hugely popular artist.


“Trying to make a movie which truly conveys the raw thrill and expressive power of art is very difficult. So I haven’t bothered,” Banksy said in a statement to The Times e-mailed from his publicist, Jo Brooks. “Instead this is a simple everyday tale of life, longing and mindless vandalism.”

An internationally renowned art world icon whose political, occasionally angry and mordantly funny pieces sell for hundreds of thousands of dollars to such big ticket collectors as Brad Pitt and Christina Aguilera, Banksy clings to his anonymity -- despite strenuous efforts of fans and detractors, no one has been able to unmask him. But he has legions of followers: A British show last year, titled "Banksy Versus the Bristol Museum," attracted more than 300,000 visitors.

The graffiti artist -- who left at least 10 works of art on the sides of buildings and utility boxes in Park City and Salt Lake City last week under cover of darkness -- has become infamous for his anti-establishment bent, running afoul of both the ivory tower ideals of art academics and local law enforcement for his all-public-spaces-are-my-canvas style: stencils of kissing policemen, or the Queen of England as a chimp.

“Exit Through the Gift Shop,” narrated by “Notting Hill” actor Rhys Ifans, opens with Banksy himself -- or at least a silhouette of him. Photographed in the dark, wearing a hoodie with his voice digitally disguised, the artist says “Gift Shop” is less about him than a guy who tried to make a movie about street art: Thierry Guetta, a French immigrant in Los Angeles who, since his mother’s death, videotapes everything in his life.


One of Guetta’s cousins is Invader, a French guerrilla artist who designs and furtively places mosaics inspired by the video game Space Invaders. Before long, Guetta is recording Invader’s installations, and is sucked into the riotous underground art world -- “It was not just illegal. It was dangerous,” Guetta says -- as it explodes in the early 2000s with the works of Shepard Fairey, Ron English and Borf, among many others.

As Banksy points out in the film, the work by its very nature is temporal -- as soon as it’s painted, glued or painted on a building or a billboard or a bus, the creations are removed by the authorities -- so it must be immediately documented to be shared and enjoyed by others. Guetta is in the right place at the right time to do just that. But as Fairey notes, Guetta is not only a filmmaker (an assertion called into question later in the movie), but also an accomplice.


Yet there’s one artist apparently beyond Guetta’s reach -- Banksy. In early 2006, though, Banksy travels to Los Angeles, needing an assistant. Guetta not only is familiar with Banksy’s milieu, but knows where the best walls are to deface and has a massive ladder -- “the perfect host,” as Banksy puts it.


Even though the artist protects his identity as if he’s in the U.S. Federal Witness Protection Program, Guetta keeps his camera going as Banksy (seen from behind or in shadow) creates his distinctive art in Los Angeles and England. Their friendship is cemented when Banksy (with Guetta videotaping) installs an inflatable replica of a Guantanamo torture victim next to a Disneyland roller coaster, as screaming families fly past.


“He was my guy after that,” Banksy says. But was Guetta actually making a movie, or just amassing a trove of tapes?


As his work generates more hype and money, Banksy believes a movie can correct the course of the cultural conversation -- back toward art itself, rather than its commoditization. Pushed to deliver a film, Guetta ultimately hands in a 90-minute movie called “Life Remote Control,” a documentary so cinematically schizophrenic it looks like it’s been forced through a food mill.

Banksy isn’t thrilled, concluding that perhaps Guetta isn’t really a filmmaker but “maybe just someone with mental problems who happened to have a camera.” Banksy decides to recut the hours and hours of video, while Guetta travels back to Los Angeles and, in an amazing reinvention, transforms himself into an artist named Mr. Brainwash.

“Mr. Brainwash is a force of nature. He’s a phenomenon. And I don’t mean that in a good way,” Banksy says of his former assistant as he prepares for his first show in Los Angeles.

“Gift Shop” becomes less of a movie about Banksy, his work and his complicated relationship with Guetta and more a study of how we see and appraise art -- either through some subjective aesthetic test or economic valuation. Do artists need to earn their fame, or is fame simply imposed upon them through some random algorithm? Is Mr. Brainwash’s work (he did the cover of Madonna’s new CD) derivative and contrived, and who’s to say if it is?

“Maybe it means art is a bit of a joke,” Banksy says near the film’s conclusion. Mr. Brainwash didn’t play by the rules, he observes, but there aren’t supposed to be rules, right?

Ultimately, the film offers a guerilla artist’s (if not documentary filmmaker’s) version of the Heisenberg Uncertainty Principle -- by observing an action, you affect its outcome. And that, in a way, seems in keeping with the aesthetics of street art: It’s all about discovery and seeing.

Good Use For Old Graffiti Stickers?

Michael Anderson is a collector of graffiti stickers - the ones that you can pass on the street almost anywhere in NYC. What he did, however, is rather unusual. He would carefully peel them off and save them. Started in the early 1990's, Anderson has what he terms as the largest collection of graffiti stickers ever. Who can argue when he has over 40,000 of them?But then, what do you do with all these salvaged stickers? Enter the Ace Hotel on Broadway and 29th Street. They had a commission for a mural so Anderson tooll 4,000 of his stickers and transferred the designs onto silk paper to make a patchwork quilt of sorts for the walls of the hotel. The effect is fantastic. I looove the post on cappucino cream designs. Amazing! 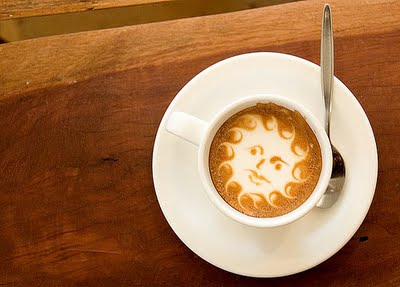