I guess in the middle of winter I have the beach on my mind. Here is another example of beach art. One could say this is just like street art - amazingly creative and very transitory.


Daniel Buren’s Beach Art: The Illusion of a Forest On The Beach

This was posted on my previous blog last year but it is worth updating for this, my new blog, this year.

File this under memorial art but it is also a type of street art. The Triangle Chalk Project commemorates the women and men who died in the Triangle Shirtwaist Factory Fire in 1911. This horrific fire which claimed the lives of 146 garment workers - mostly young immigrant women - helped launched the unionization of the industry.

The company employed approximately 600 workers, mostly young immigrant women, some as young as twelve or thirteen and worked fourteen-hour shifts during a 60-hour to 72-hour workweek. According to Pauline Newman, a worker at the factory, the average wage was six to seven dollars a week, at a time when the average yearly income was $791. A fire started on the 8th floor of the factory building in Greenwich Village. Women on the 9th floor soon became trapped - the owners of the factory locked the doors so the women could not leave early or take breaks. Fire truck ladders could not reach higher than the 4th floor of the building. There was only one way out - they jumped out the window ... to their deaths. The scene was devastating.


Every year volunteers go to the doorsteps of the women who died and write a memorial to them in chalk on the sidewalk. Here are three of the ones I chalked:

For those who would like to learn more about this horrible tragedy, check out these Triangle Shirtwaist Factory Fire books

From Incredible World website:
Andrew van der Merwe is a professional calligrapher and letter artist based in Cape Town, South Africa. In last six years of his work he was working on a developing his original technique of the beach calligraphy.

He considers himself as the world’s first professional beach calligrapher. His artworks are made by carving letters in the beach sand.
Here you can see some of his masterpieces that he recently produced. Sadly, his artworks doesn’t last for a long time so he also has to be a good photographer because that is the only way to show his art to a wider audience: by taking great photos of his artworks 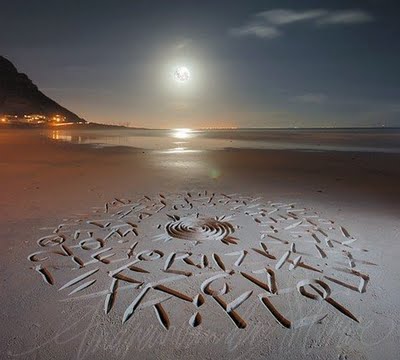 Should we try this on the side of a building....?

Why is it that when a street artist creates art on the street it is criminal but when an advertiser does it, it is acceptable and even legal. Take the recent ad campaign from Mini Amsterdam.

Just after Christmas, the company created "trash piles" on Amsterdam streets of used ribbons, crumpled wrapping paper, and large cardboard boxes that appeared to be Mini Cooper packaging. As you can see in the video below, the boxes were definitely attention-grabbers....and street blocking garbage.