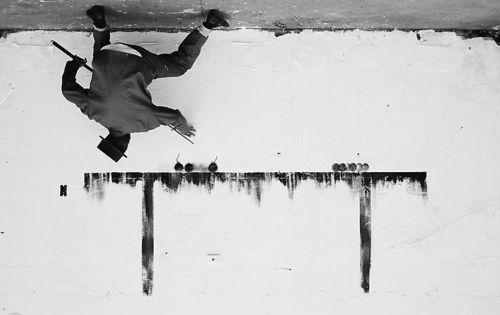 While most street artists like to remain mysterious or anonymous, South African artist Robin Rhode takes street art to a whole new level by adding in performances. Using everyday materials like chalk, charcoal or paint, he conjures up creative stories and then adds in actors to his “plays.” What starts out as a simple drawing of figures and shapes, magically transforms itself into a clever piece of performance street art.

Street art has many palletes and dirty car windows has to qualify for one of them. Scott Wade is a dirty car window artist and the resulting work is impressive. His site Dirty Car Art says it all. Check out his full gallery here .

I would say that this is one instance that I would not pray for rain to help me clean off my car....

A small blurb in New York Magazine on street art the other day says that "Wet Dream", a graffiti piece by Coco 144 from 1974 that is worth $30,000 (yes you heard that right, kids) is showing at the Eric Firestone Gallery in East Hampton in late August.

Here is my question of the day - has graffiti "jumped the shark"? Become irrelevant? Lost its edge? Now that the beautiful people are showcasing it and valuating it, has street art lost its cred?

In a brazen little bit of self promotion, I offer my book "The Street Art of Love" through Lulu.com which is offering free shipping for a limited time. Can we ever have too much Love?

Time Out Covers Queens - And 5 Pointz

I love Time Out Magazine and this week they highlight Queens ... and my favorite street art spot in the world - 5 pointz.

Read the blurb and get ready to go to Queens---

Street art explosion!
Before you hit any of the conventional galleries in Long Island City, make a beeline for 5 Pointz Aerosol Art Center: The old warehouse has an exterior completely wallpapered in more than 350 bright graffiti murals. “We allow artists a place to expand, a place where they won’t have to look over their shoulder,” says curator Jonathan Cohen, who paints under the name Meres One. This isn’t some random tag wall, though—artists, including legends like Cope2 and Tats Cru, are required to submit work and obtain a permit before painting. The inside of this hive of creativity (formerly the Phun Phactory) is buzzing too, filled with artists who rent its below-market studios. Arrange a guided tour, and you just might run into magazine or film shoots; a Tribe Called Quest, Mobb Deep and Joss Stone have all found inspiration here. If you leave craving more art, you’re in luck: PS1 (MoMA’s contemporary-art outpost) is just down the street. Jackson Ave at Davis St, Long Island City (5ptz.com). Subway: E, M to 23rd St–Ely Ave; G to 21st St–Jackson Ave; 7 to 45th Rd–Court House Sq. Weekdays by appointment, weekends open at noon. Free.

Rome Street Art - Retaking the Streets from the Artists?

Has street art made the financial papers? Only when it is considered a blight. Take for example the recent article in the Wall Street Journal about graffiti in Rome. Here it is in part. Can I just add the comment "Oh plueeeazzz!"

ROME—On a recent afternoon, a group of American diplomats gathered on Rome's cobblestones with buckets and rollers, spreading peach-colored paint across the weather-beaten façade of a medieval storefront. Their mission: To cover up the swirls of graffiti lining one of Rome's oldest neighborhoods.

"It's just so sad and so devastating," said Rebecca Spitzmiller, an American lawyer living in Rome, who donned rubber gloves and a dust mask. "We're retaking Rome." 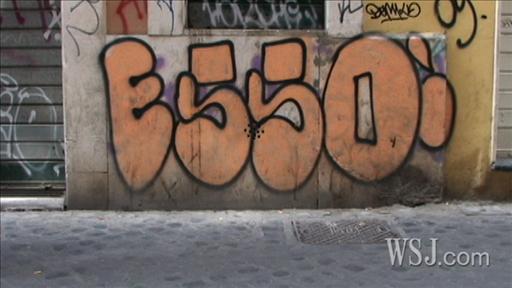 Ms. Spitzmiller had tapped the diplomats to join the volunteer force of Italian and American students she's recruited in recent months. They clean up after graffiti artists who have swathed the city's palazzos and piazzas in tentacles of spray paint.

The campaign has inspired cheers and approving headlines across Italy.

But some Romans see graffiti—an Italian word meaning scratches—as a way to reclaim the city from tourists and prevent it from languishing into a museum. And they don't always appreciate the Americans' meddling.

"Not all Romans perceive the city as tourists do," says Rocco, a 27-year-old who started spray-painting as a teenager and declined to give his last name. "This is my city, my home. The aim is not to deface the city but to acquire visibility, to show the city is alive."

Graffiti artists say their expression is part of an ancient tradition. Tourists filing through the Colosseum's archways are still greeted by a phallic symbol, centuries after it was etched into the stone surface of the ancient arena. 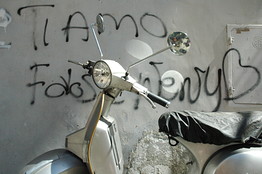 I say long live the street artists! It is what gives a city its vibrancy and creativity. I for one will mourn the loss of Rome's graffiti... should the moralists have their way.

Sneakers As Art and Personal Expression 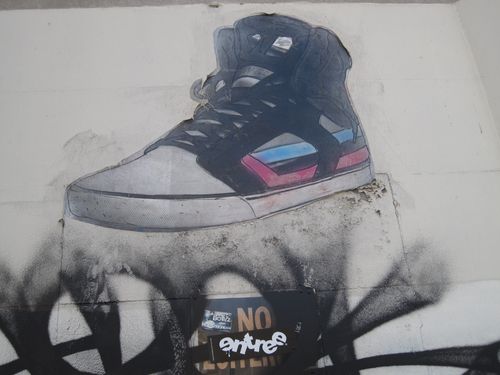 Sneakers (Or are they called "kicks"? I don't know the lingo...) have made their way into the street art culture zeitgeist and even into high fashion. Take for example Nike which has a back room in its store in Soho New York City decorated with foot molds, strips of leather, a wall of shoe laces in various colors and even a few stray soles, where you can "design your own sneakers". That is somewhat misleading because what you are really doing is going on to a computer, chossing a style that already exists and adding your colors and flourishes. It is then sent to China where they are made for you. But the concept is interesting and it seems very popular.

I have been noticing that sneakers are part of the well dressed street artist wardrobe along with a special graffitied T-shirt and sometimes a cap.

So the question of the day is - will sneakers become another form of personal expression as is the T-shirt? .... or maybe I am so out of it that the question does not need to be asked as it is already a "yes"?