Today was a big front page of the Arts section story in the NY Times on graffiti.

Here is an excerpt: 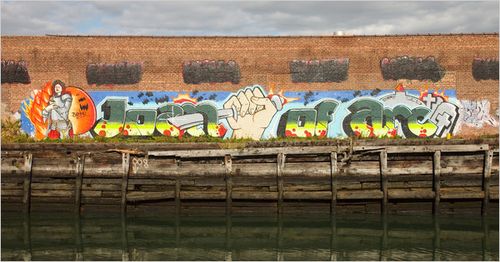 Anyone who has been lost in the last few weeks around the southern reaches of the Gowanus Canal in Brooklyn could be excused for experiencing a powerful Koch administration flashback. On the wall of a brick warehouse there, visible from the parking lot of a furniture store, a huge mural unfurls itself, a loving, seemingly spray-by-spray re-creation of one of the more infamous pieces of graffiti ever to ride the subway: a 1980 work by the artist known as Seen that covered the length of a No. 6 train car with the ominous phrase “Hand of Doom.”

The original work — among those canonized in Henry Chalfant and Martha Cooper’s 1984 landmark photographic history, “Subway Art” — was a token of its troubled urban times, a reference to the Black Sabbath song of the same title with the words flanked by a hooded executioner and a time bomb. The 21st-century version, on closer inspection, turns out to be a bit gentler and a lot more oblique. It reads “Joan of Arc,” and the hatchet man has been replaced by an armored representation of the martyred French saint.

A few miles away, on a streetfront wall in the Sunset Park section of Brooklyn, a similarly odd example of historical revival has sprung up: a kinetic-looking 1980 piece by the graffiti writer Blade has been recreated, with the five letters of his name changed to read Plato. On a coffee shop wall in Bushwick, a name piece from the same year by the artist known as Dondi has been faithfully resurrected but changed to read Gandhi. And a copy of an early-’80s subway tag by the artist Sin appeared just last week on a row of lockers inside Louis D. Brandeis High School on the Upper West Side, with the addition of a few letters and some philosophical heft; the name is now Spinoza.

The pieces might sound like the result of some kind of graffiti-world version of Old-Timers’ Day at Yankee Stadium. But they are actually the works of a newly formed collective of (mostly) former graffiti writers in their 20s and 30s, who have embarked on an unusual citywide campaign to summon 50 or more of the most famous pieces of old-school graffiti out of the history books and back onto the streets. The project, called “Subway Art History,” is unusual not only because the artists are making the pieces with the permission of businesses, schools and other perhaps nostalgic owners of blank vertical space, but also because of the nature of the pieces themselves. They are expressions of homage in a subculture that has almost always been defined by fierce competition, intense striving for originality and a kill-the-elders attitude toward the past.

“In graffiti it’s like a teenage thing: ‘No way am I going to become my father, no way am I going to make anything that looks like anyone else’s’ — and then, of course, you become your father,” said a 32-year-old former graffiti writer who helped form the collective. He and other group members (there are 2 founders and a floating membership of about 10) asked that their names be withheld, not for the usual reason — the police — but because the collective, which calls itself Slavery, is seeking to get away from the ego jockeying that normally accompanies graffiti work.

The project was partly inspired, he said, by one completed last year along a blighted commercial stretch of West Philadelphia by the artist Steve Powers. As part of that city’s Mural Arts Program, Mr. Powers created a series of eye-popping murals visible from the elevated train line, with the cooperation of local property owners.

Another approved graffiti location is 5 Pointz in Long Island City. Unfortunately it has become so popular that the owner of the property is selling it to a developer of luxury condos. A disgrace!