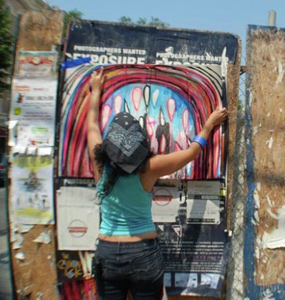 According to an article in L Magazine, Julie Torres, an artist living and working in Williamsburg Brooklyn was arrested for taping some of her artwork on a construction site wall. The charges were for creating graffiti which sounds like a stretch to me. Here are the particulars in her own words:

On Saturday, July 17, at about 2pm, an unmarked car pulled up beside me on North 11th Street in Williamsburg, and three men in baseball caps leaped out. They surrounded me and asked for my name, identification and address. I hesitated, but stated my name and fumbled for my ID. I didn't immediately give them my home address. They became increasingly hostile, demanding that I provide it. I live around the corner from that spot, and I was uneasy. I asked if they were police officers. They laughed, "Yeah, honey, we're cops." I was alone on the street. I requested proof, but had no way of discerning an authentic badge from a fake one. My mind flooded with scenarios. I asked to speak with a uniformed officer. That only made things worse.

For the past two years I've been painting and selling artwork on Bedford Avenue. Selling one's art on the street is legal, and a great way to paint outdoors on nice days. I set out last year with a folding table and some small paintings, but since then my work has grown. I was looking for a way to continue painting and selling art outside with larger pieces.

North 11th Street and Bedford Avenue is an ideal location, with lots of foot traffic, great light, and a huge construction site fence that has seen better days. I figured I couldn't possibly do any harm there, so I taped a few completed watercolor paintings to the fence, along with some blank paper. I painted and sold work at that corner for months without incident. Uniformed police officers made conversation in passing, never indicating that I was doing anything illegal. Only when that unmarked car pulled up in July did I find out that I could be arrested for temporarily taping a watercolor painting to a construction site wall.

My request to speak to a uniformed officer brought two squad cars screeching to a halt beside me, sirens blaring. I still didn't understand what was happening. I thought the uniformed officers would talk to me, but they followed the plainclothes cops' orders, handcuffed me and threw me into the back of a police car. I asked what my charges were. The answer was incomprehensible. Baffled, I thought, "This can't be happening!" I was being arrested for graffiti.

I was photographed, fingerprinted and processed at Central Bookings in downtown Brooklyn, and led into a tiny holding cell full of mice, roaches, one toilet, and 20 other women crouched on the floor. I was held for 23 hours until, finally, my name was called and I saw a judge. My case was adjourned pending further documentation from the officers, and I was released onto the streets of Brooklyn. My art materials, over 40 tubes of paint worth hundreds of dollars, are still being held as evidence.

I've been back to court once since then, and I have another court date on October 13. From the original three counts of graffiti, I've been offered a lesser charge of Disorderly Conduct, which I didn't accept. My hope is that this case will eventually be dismissed, but I'm told that could take over a year, with several more court dates in between. I've met with friends, lawyers, artists and activists, trying to figure out my next move. For now all I can do is wait for my next court date. And hope.

In the meantime, I'm back on Bedford Avenue and North 8th Street most weekends with my folding table and small paintings. Stop by and chat if you're in the neighborhood.

You can find Julie's work online at julietorres.weebly.com

Read about her day in court here.

My thoughts on this are as follows - while I know that graffiti is illegal, exhibiting work for sale on a construction site temporary wall, work that (incidently) will not be left there after the artist leaves the site, should not and I believe is not illegal. And to put an individual in the position of having to accept lesser charges to dismiss the case implies that the individual is guilty and is not right. Can anyone suggest what we as a citizenry can do about it?

Frankly I am not of the opinion that graffit on a temporary wall such as a construction site should be illegal anyway but that is another post at another time.....

In case you want to explore this issue, check out Crimes Of Style: Urban Graffiti and the Politics of Criminality