The Underbelly Project in NYC 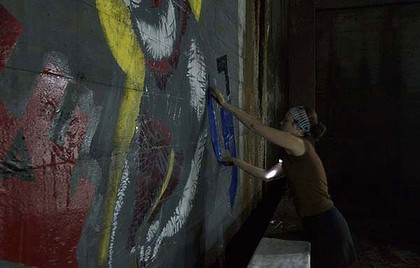 Today in the New York TImes (and reported in L Magazine and even in some Australian newspapers) there is another article on street art - is this a trend? If so I like it. A Times reporter gained access into a part of the New York Subway system where an abandoned station sits, unused and unadorned.. that is until some famous street artists found it. Now it is a huge underground art gallery that few can see and few know how to locate. I love the mystery!

A vast new exhibition space opened in New York City this summer, with a show 18 months in the making. On view are works by 103 street artists from around the world, mostly big murals painted directly onto the gallery’s walls.

It is one of the largest shows of such pieces ever mounted in one place, and many of the contributors are significant figures in both the street-art world and the commercial trade that now revolves around it. Its debut might have been expected to draw critics, art dealers and auction-house representatives, not to mention hordes of young fans. But none of them were invited. In the weeks since, almost no one has seen the show. The gallery, whose existence has been a closely guarded secret, closed on the same night it opened. Known to its creators and participating artists as the Underbelly Project, the space, where all the show’s artworks remain, defies every norm of the gallery scene. Collectors can’t buy the art. The public can’t see it. And the only people with a chance of stumbling across it are the urban explorers who prowl the city’s hidden infrastructure or employees of the Metropolitan Transportation Authority. That’s because the exhibition has been mounted, illegally, in a long-abandoned subway station. The dank, cavernous hall feels a lot farther than it actually is from the bright white rooms of Chelsea’s gallery district. Which is more or less the point: This is an art exhibition that goes to extremes to avoid being part of the art world, and even the world in general. The show’s curators, street artists themselves, unveiled the project for a single night, leading this reporter on a two-and-a-half hour tour. Determined to protect their secrecy, they offered the tour on condition that no details that might help identify the site be published, not even a description of the equipment they used to get in and out. And since they were (and remain) seriously concerned about the threat of prosecution, they agreed only to the use of street-artist pseudonyms.