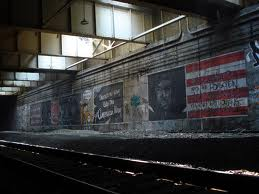 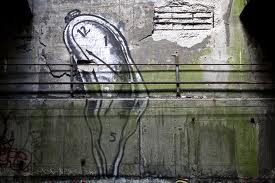 The New York Times recently reported on Chris Pape, 50, whose street art works from the 1980s decorated an abandoned stretch of subway on Manhattan's Upper West Side. It is the abandoned freight train tunnel under Riverside Park where he began painting huge murals on the walls in 1980.  He is inspired by famous artists and often incorporates elements of famous works in his own work. See the photo of Pape's meling watched aka Salvador Dali.

According to wikipedia, Chris Pape (aka Freedom) is an American painter and graffiti artist. Pape started tagging subway tunnels and subway cars in 1974 as "Gen II" before adopting the tag "Freedom". Pape is best known for his numerous paintings in the eponymous Freedom Tunnel, an Amtrak tunnel running underneath Manhattan's Riverside Park. Prominent paintings in the Freedom Tunnel attributed to Pape include his "self-portrait" featuring a male torso with a spray-can head and "There's No Way Like the American Way" (aka "The Coca-Cola Mural"), a parody of Coca-Cola advertising and tribute to the evicted homeless of the tunnel.

Another theme of Freedom's work is black and silver recreations of classical art, including a reinterpretation of the Venus de Milo and a full train car recreation of the iconic hands from Michelangelo's Sistine Chapel. 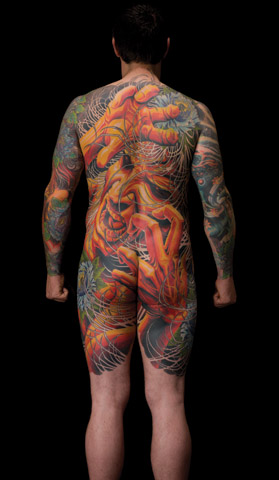 Just got this announcement from Gallery AD about a wonderful tattoo exhibit by the Analog Tattoo Arts Kolective. This is billed as the third and final installment of a tattoo arts documentation project by the global tattoo community of the Analog Tattoo Arts Kolectiv.
BLOODWORK: BODIES is yet again an unprecedented, artistic and historic project 4 years in the making by 53 tattooers completing 119 backpieces & bodysuits from 5 continents presented in 360˚ interactive views. A 360˚ concept was developed in response to a common issue when viewing a photographed tattoo. That is, alone a photo often struggles to capture the fourdimensional aspects of large scale tattooing. “It looks amazing but I wish I could see it in person,” is a common phrase spoken by tattooers, who often are not visually satisfied until they can physically move around or handle the tattoo being observed. It’s a true statement from any sincere connoisseur. One really does need to follow the flow around and into the multi-dimensional aspects of a tattoo to completely understand what the tattooer is trying to convey.

Despite all the hyperbole about the violence at Occupy Wall Street, I have found none of that in my two visits there. My first visit was before the big clean-up (yes, it needed a clean-up) and the second visit was just a few days ago (and the park looked very clean).

Since my first visit there has been a marked improvement in the environment: It is much more organized with a donations area, a press area, a food area and a "drying out of wet clothes" area. Every rainstorm is a problem - there is no place to do laundry. For anyone wishing to donate the use of a clothes dryer or washing machine, I know that effort would be greatly appreciated by all there. Help and donations of any kind are appreciated.

Unions have joined in the protest, showing support and lending a good energy.

Here are some photos. I am working on editing a short video of the area that will be posted eventually. 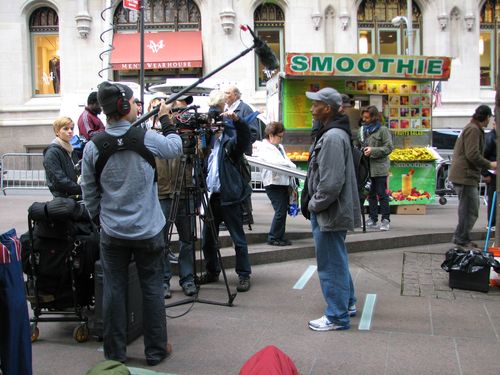 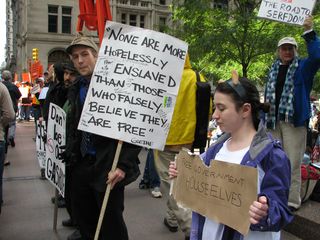 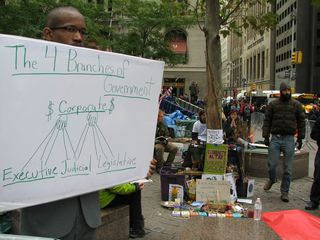 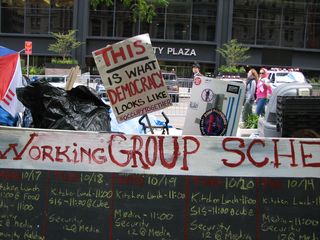 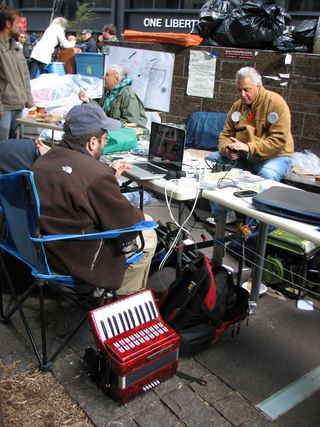 I sense a great trend going on in cities that are seeking rejuvenation. They are embracing street art. Take Lodz, Poland for example. Or Detroit. Now I read that Albany is commissioning street artists to decorate buildings in town. I am heartened and gratified.

Here is an update of this trend in the Huffington Post:

Street Art events which pair local and international talent with bare walls continue to multiply in unexpected locations around the world as young Street Artists and their fans push forward this D.I.Y. scene that had early roots in graffiti. From festivals and week-long events in Toronto to Melbourne to London to Paris to Stavanger (Norway) and Grottaglie (Italy), the first worldwide people's art movement continues to enliven previously moribund areas of cities and engage local conversations about culture and public space.

After a successful first tentative "Living Walls" event in Atlanta last year, the city of Albany, New York had its first "Living Walls: Albany" street art show last week. The themes weighed heavily toward figurative surreality and the animal kingdom aesthetically, and toward a broad discussion on the appropriate use of public space for art.

Mostly, we just saw people stop and stare as these pieces were going up in their neighborhoods, and we watched as kids could barely hold back their enthusiasm and curiosity. For some areas, this was the first time any new visuals had appeared in years, unless they were pitching tobacco or soft drinks.

As Street Artists installed new works on walls around Albany the common story was the level of engagement of adults and kids stopping on the sidewalk, in their cars, watching the process, photographing and discussing the art, exploring the creative process. Some kids even became assistants to the artists, creating a sense of ownership, and yes, community.

During a period of retrenchment and after years of incremental cuts to arts programming in public schools and cultural institutions at every level, it would appear that an event like this is filling a void in kids' understanding of their own creativity. The organic route of Street Art's popularity has shape-shifted yet again and its emergence looks sometimes like a democratic movement, messily reaching a new generation while budgetary axes continue to fall around them.

Who would have thought that the Polish city of Lodz would be so street art friendly? In fact they have an initiative to support street art that is unprecedented and very exciting! More cities should do this!

Lodz is receiving my personal Art Medal of Honor for its recognition of the value of street art and its effort to install some of the best representations of that work through-out the city. Here is the story as reported by Joonbug:

Mayor Hanna Zdanowska and the Ambassador of Spain in Poland have both funded an effort to make street art a mainstay in the Polish city of Lodz. What this means is the city will be a larger than life exhibit of some of the finest graffiti art in the world. Its buildings will be covered in art and slowly but surely even the streets will have sculptures, installations, and functional decoration. The project is called the Urban Forms Gallery, and it has only just begun.

Some of the finest street artists have already participated. So far the list includes Aryz, M-City, Remed, Chazme, Sepe, SatOne, Etam Crew, and Kenor. It is a work in progess and the streets will always be evolving and blooming into something new. The Urban Forms Gallery (or Galeria Urban Forms) has set up a website that showcases the installations as they’re made. To see them all, visit the official site here.

Mark your calendars for early 2012. According to Graffnews, Jeffrey Deitch, formerly of New York’s most street art-savvy gallery Deitch Projects and now director of Los Angeles’s Museum of Contemporary Art, will bring his brand of populist, youth-courting art back home to NYC when his first major museum survey of graffiti, street art and street art photography, Art in the Streets, which opened in LA this year, will come to the Brooklyn Museum next year, from March 30 to July 8, 2012.

The Allure of Ruin 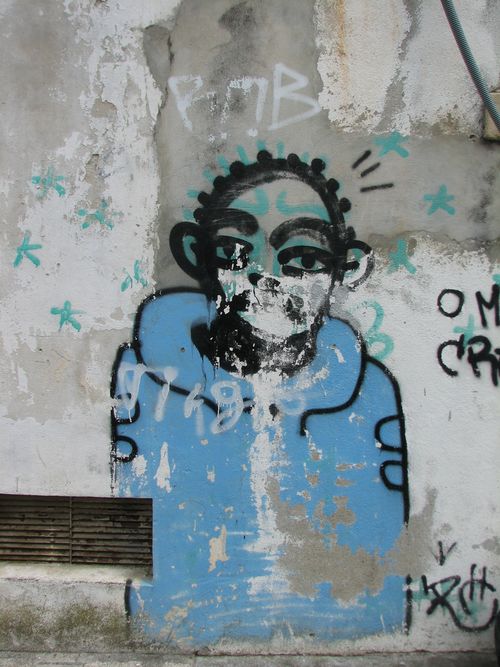 Street art and decay are natural companions. No sooner does the art appear than it begins to decompose - via the elements of nature and "nurture" (human interaction). As a street art enthusiast and supporter, I am drawn to decay and ruin in my art. It is absorbing, interesting, dramatic. And perhpas even more curious, I am not alone. I am not that unusual.

Morgan Meis writes an interesting essay  on the subject of ruin as art for The Smart Set emag. Here is an intro to his fascinating and much longer essay:

Everybody is talking about ruins these days. That could be a bad sign. Detroit, in particular, seems to have captured the fancy of the ruin enthusiast. Detroit has experienced a 25 percent reduction in population over the last 10 years or so. Whole areas of the city have been abandoned. You can see entire neighborhoods in ruin, skyscrapers in ruin, a vastly depopulated downtown area. Camilo José Vergara, a photographer specializing in urban decay, once suggested in the mid-1990s that large sections of downtown Detroit be turned into a "skyscraper ruins park." It would be a testimonial to a lost age, preserved in stone and metal and glass. Today, people sometimes travel to places like Detroit and other Rust Belt locations for the sole reason of gazing upon the ruins.

These indelible pictures present an un-nuanced and static vision of Detroit. They might serve to “raise awareness” of the Rust Belt’s blight, but raising awareness is only useful if it provokes a next step, a move toward trying to fix a problem. By presenting Detroit, and other hurting cities like it, as places beyond repair, they in fact quash any such instinct.

Malone is right about one thing: Vergara’s photographs do not suggest a next step. Photographs by Yves Marchand and Romain Meffre (who took pictures of Detroit for a traveling exhibition entitled "The Ruins of Detroit") portray an inexorable process of decline. Marchand and Meffre's photograph of an interior of the Woodward Avenue Presbyterian Church, for instance, suggests something post-apocalyptic. Books are strewn across the top of a wobbly piano. Bits of mortar and dust cover what was, not so long ago, finely polished woodwork. It seems as if people left this place suddenly and amidst some catastrophe, never to return. These photos, and the plethora of amateur ruin documentation to be found on the Internet, are not created so much out of the need to raise consciousness as out of the need to stand before these ruins in awe. It isn't clear what you do next, after awe. The only thing that is clear from these photos is that the way forward is not clear. From the perspective of the ruin, the future always lacks clarity for the simple reason that ruins look mostly backward.

There are many photography books on Detroit including the stunning Lost Detroit: Stories Behind the Motor City's Majestic Ruins

Morgan Meis is a founding member of Flux Factory, an arts collective in New York. He has written for The Believer, Harper’s, and The Virginia Quarterly Review. Morgan is also an editor at 3 Quarks Daily, and a winner of a Creative Capital | Warhol Foundation Arts Writers grant. He can be reached at morganmeis@gmail.com. 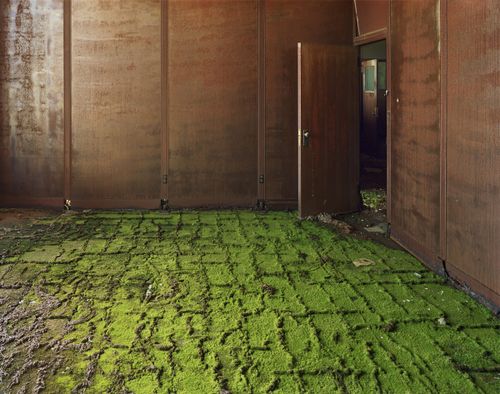 This week offers an exhibition at the Queens Museum of Art of Andrew Moore's haunting photographs of Detroit as it decomposes. A full review of the show appears on Art Cards. Here is the intro to  Gabriella Radujko 's review:

Andrew Moore’s must see photographs in Detroit Disassembled at the Queens Museum of Art capture the ruinous state of Detroit after the collapse of the automotive industry. The colors are lush, the light, ecclesiastical; and Moore captures the intensity prescribed by Frederick H. Evans who urged photographers to “wait till the building make you feel intensely”.

Check out Trendhunter which has this great graffiti post.

Although once viewed as a criminal act of vandalism, the art of graffiti has been steadily earning its place as a respected and popular form of creation over the past few decades, as is clearly shown in this collection of awesome graffiti specimens.

From billboard bombing to yarn pothole repairs, these awesome graffiti specimens highlight the seemingly limitless amount of ways that imagination, creativity and a little bit of mischief have manifested themselves into public artworks. In fact, because graffiti is a medium without any rules, guidelines, oversight or expectation of financial reward, it could easily be argued that it is in fact one of the truest and most pure forms of artistic expression in existence.