Happy Birthday Juxtapoz! If you are in Los Angeles, try to attend tonights gallery opening at the Copro Gallery, 2525 Michigan Ave. T5, Santa Monica, Ca 90404, celebrating 18 years of Juxtapoz Magazine. For those not acquainted with Juxtapoz, it is the magazine of lowbrow, street art showcasing such (now famous and eminent) artist as Robert Williams: 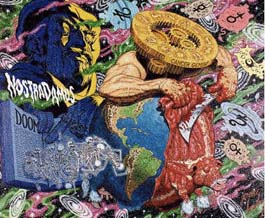 "We turn 18 this year. Old enough to join the army, vote, serve on a jury, go to the prom, and, we even think we can adopt a child now. To celebrate, Copro Gallery in Santa Monica will be hosting the exhibition, Juxtapoz Turns 18, featuring works from a group of artists who have been featured in our pages over the past 18 years, including Retna, Todd Schorr, Shepard Fairey, Mark Ryden, Jeremy Fish, Marion Peck, Andrew Schoultz, Camille Rose Garcia, CR Stecyk III, and many others." 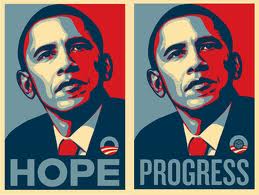 Shepard Fairey has pleaded guilty to misconduct claims about which photograph he used for the Barack Obama ”Hope” poster that became iconic during the 2008 presidential race.

The plea is part of a criminal case against Fairey separate from the 2009 case he filed against the Associated Press regarding copyright infringement on a photograph Fairey used in the poster. That lawsuit–and a countersuit filed by the AP–were settled out of court last year.

Martina Secondo Russo is a street artist who paints the most beautiful bathing beauties and now she has an exhibit in Italy. It runs through April 26 so if you are planning a trip to Genoa, please stop by the gallery.

MF Gallery Genova is proud to present two solo shows by Martina Secondo Russo and Frank Russo. All the paintings in these brand new series, (acrylic on wood and board) were produced during the artist's stay in Genova, Italy in early 2012.

In "Bellezze Al Bagno" ("Bathing Beauties"), Martina Secondo Russo paints pin up shots of Italian movie stars from the 1950's-70's such as Claudia Cardinale, Sofia Loren, Gina Lollobrigida, and Ornella Muti, combining them with iconic locations such as the Lerici Castle, the town of Camogli and the typical Ligurian coastlines with it's stratified cliffs and maritime pine trees.
She uses images from her native region of Liguria, places like Il Golfo Dei Poeti, where she grew up going to the beach with her family, to create a nostalgic look into her own past. By using the pin up images, paired up with a vintage inspired color scheme, she brings the viewer back to a more innocent time in film.

In "Toy Room", Frank Russo uses his signature bright psychedelic colors and cartoonish style, to create a series of paintings inspired by his collection of 1970's-80's action figures. Some of the paintings depict actual toys from that era, or imaginary toys invented by Russo, such as the "Skull Mountain" playset. Other pieces draw inspiration from the vintage toys and cartoon series that left a deep impression on his young mind.
A "Shogun" style robot is crucified and surrounded by green smoke... A terrified "Blythe Doll" woodland fairy sits in the middle of a horde of robots, skulls and ghouls... A naked female grim reaper rides a skateboard, accompanied by the slogan "Everybody's Gonna Fuckin Die"... Russo uses his childhood memories and reinterprets them, twisting them into a less innocent and sometimes more evil vision.

Martina Secondo Russo was born in Genova, Italy but has lived in New York City since she was four years old.
Her artwork is inspired by: horror, tattoos, toys, renaissance art, pin-up art, and the juxtaposition of beauty with the grotesque.
Martina received her BFA in Fine Art from The California Institute Of Art in 2002.

Frank Russo is a Brooklyn Artist who has been drawing comic books since the age of nine.
His art fuses a life-long love for trash culture and fast music with a wide variety of styles and media such as comics, paintings, toys, props and costumes.
His infamous “Monsterfaces” were featured on a series of Collectable Art Trading Cards. Frank's most current ongoing project is a performance art death metal band called DETHRACE. Frank built all the costumes and fronts the band as 10 ft tall fiberglass robot, "Mecronos".

In 2003, Martina and Frank opened MF Gallery in NYC's Lower East Side. The Gallery has since relocated to Gowanus, Brooklyn and continues to be in the forefront of NYC's Underground Pop Art scene. In 2009, MF Gallery opened a second location in Genova Italy, where the works of Italian artists are shown alongside artists from around the world. 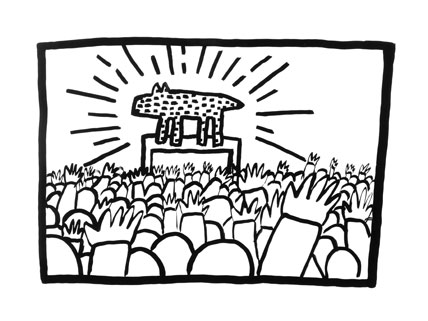 Mark your calendars for March 16–July 8, 2012 at the Brooklyn Museum, Morris A. and Meyer Schapiro Wing, 5th Floor

What might be most interesting about this show is the display of Keith's personal notebooks.

Keith Haring: 1978–1982 is the first large-scale exhibition to explore the early career of one of the best-known American artists of the twentieth century. Tracing the development of Haring’s extraordinary visual vocabulary, the exhibition includes 155 works on paper, numerous experimental videos, and over 150 archival objects, including rarely seen sketchbooks, journals, exhibition flyers, posters, subway drawings, and documentary photographs.

The exhibition chronicles the period in Haring’s career from his arrival in New York City through the years when he started his studio practice and began making public and political art on the city streets. Immersing himself in New York’s downtown culture, he quickly became a fixture on the artistic scene, befriending other artists such as Jean-Michel Basquiat and Kenny Scharf, as well as many of the most innovative cultural figures of the period. The critical role that these relationships played in Haring’s development as a public artist and facilitator of group exhibitions and performances is also explored. Pieces on view include a number of very early works never before seen in public; seven video pieces, including Painting Myself into a Corner (his first video piece) and Tribute to Gloria Vanderbilt; and collages created from cut-up fragments of his own writing, history textbooks, and newspapers.

Keith Haring: 1978–1982 is curated by Raphaela Platow. The exhibition is co-organized by the Contemporary Arts Center, Cincinnati, and the Kunsthalle Wien. The Brooklyn presentation is organized by Tricia Laughlin Bloom, Project Curator, and Patrick Amsellem, former Associate Curator of Photography, Brooklyn Museum. 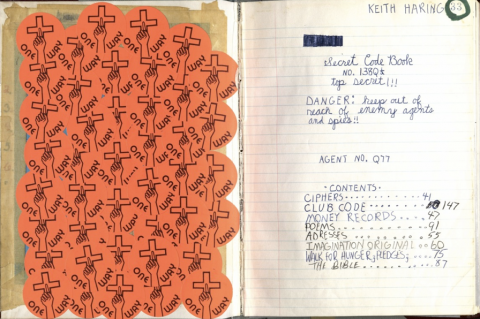 This exhibition is made possible by Lisa and Dick Cashin with additional support provided by the Stephanie and Tim Ingrassia Contemporary Art Exhibition Fund.

Seen on an East Village street: 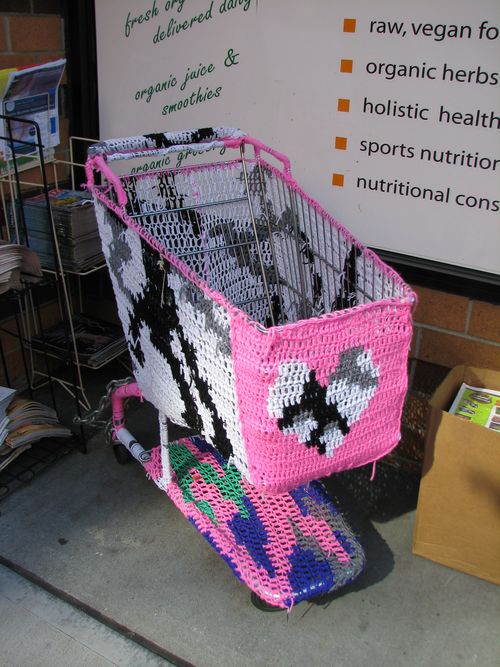 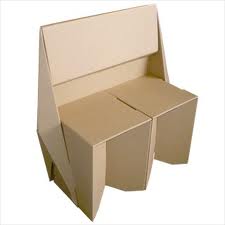 This found on Cool News: An Italian paper company Sabox, is turning garbage into cardboard furniture.

I am not sure this furniture is my taste but I love the idea of turning garbage into usable items.

"Sabox mixes the best and worst Italy has to offer: the garbage of the Naples area, which shamed us, and the design, creativity and resilience we are known for," says Sabox founder, Aldo Savarese. Sabox's "sleek furniture" is designed by Generoso Parmegiani. It is available in "various colors and shapes, from simple rectangles to sinewy designs that can be pieced together to form desks, bar counters and even chandeliers."

In addition to using recycled paper, "Sabox uses energy-efficient technology, nontoxic glues and water-based inks." Sabox's business model also helps combat organized crime, which in nearby Naples "moved into waste hauling" as the city's landfills became saturated. And the company also hopes to create a "green district" and "has already enlisted a jar maker, can-lid company and a label maker to serve producers of sauces and pasta in the region."

Whenever I wander through the city I am struck by the beaurty of everyday objects, the occasional splash of graffiti and sometimes just even the way the light hits the buildings. This unexpected urban art was  highlighted in a great article in the New York Times by Randy Kennedy. It concentrates primarily on moments inthe subway but by extension, encompasses the entire city zeitgeist

Read the full article in the link above. Here is the start of the article that is almost Walt Whitman poetic:

So for a long time now it’s been second nature for me to look at the city as if many things in it are unintentional works of art — or performance art — and to see much of the art I come across in the becalmed rooms of galleries and museums as unconscious extensions of the teeming city beyond. Sometimes the real art is indeed great. But there are also those beautiful moments when the not-real art that seems to jaywalk in front of me and bubble up out of the manhole covers can seem just as great.

And here is one of my own photos of the subway and its artistic elements. 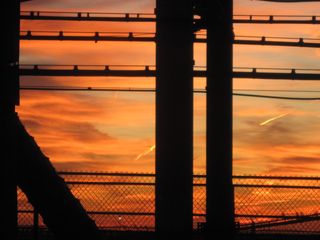