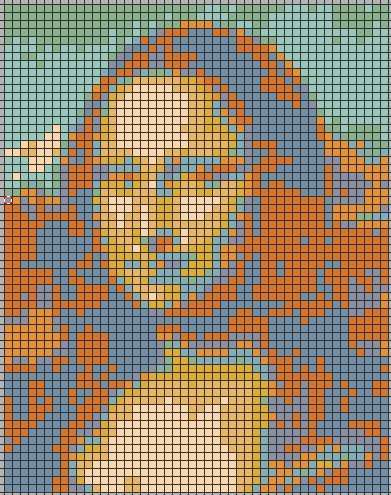 How about creating art in the workplace? Here is a tale about the creativity of some French workers who design mosaics by using post-it notes.

A handful of workers in Ubisoft's Paris offices have sparked a "world war" in Post-It note mosaics. It all started on a sunny day last May when Thibault Lhuillier, Emilie Cozette and a few others "started goofing around with Post-It notes. In the space of about 15 minutes, they managed to stick a pretty good likeness of a character from the Space Invaders videogame ... to a window of their headquarters" near Paris. Their impetus, says Thibault, was the sour economy. "We had to do something to change the mood and get out of the grayness," he says.

Within days, workers in a nearby office building "one-upped Ubisoft with a more elaborate Post-it Pac-Man on its own windows."

Team Ubisoft fired back with "an even more ambitious collage," triggering Post-It note creations from workers from several other offices.

As the battle escalated, the "designs grew ever more complex." Not to be outdone, Ubisoft unleashed "a three story Post-it collage of Ezio, a character from Ubisoft's Assassin's Creed videogame. It required 8,000 Post-it notes and the efforts of some 450 Ubisoft employees."

All 50 of Ubisoft's windows are now covered in Post-It notes, and the "war" has spread around the world. In Germany, Apple store employees famously created a Post-it note portrait of Steve Jobs shortly after his passing last October.

3M, makers of Post-it notes, is not directly supporting the craze, although years ago it sponsored a fashion show "featuring clothes made entirely out of Post-it notes." 3M's Charlate Coudeyras says the artwork "resonates with the values of the brand." Some, however, say that the Post-it wars are a distraction and bad for worker productivity. Thibault Lhuillier says that just isn't so: "If our work wasn't done yet, we did it," he says. "Besides, companies spend a lot of money to promote team-building. This costs a lot less."

Thanks to Coll News' Tim Manners for the story.

I'd be more scared if that would be outside my door!

Your work expression is simple, easy to understand, write very have feelings, is very realistic. Good fortune to be able to see your this article, I hope that I can still have a chance!