Another Use For Street Art? 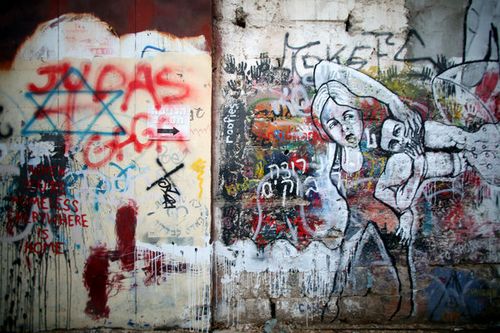 In TEL AVIV, there is an opportunity to learn a little Hebrew as you walk the streets admiring the street art.  Guy Sharett’s Hebrew lessons are taught in a walking classroom, on the streets and alleys of Florentin, his neighborhood here, where new vocabulary words are mixed into an ever-changing curriculum.

“Get out from the TV, start to live,” Mr. Sharett translated one scrawled Hebrew slogan at the start of class one recent evening, trailed by a dozen students thirsty to understand the life of the Tel Aviv street as much as the revived ancient language spoken on it.

He pulled out a little white board to break down the graffiti before him. The first part of the slogan, “Tzay mayhatelevizia,” used the imperative — get out — while “tatchil lichayot,” start to live, was in the future tense. “It sounds to us too pompous and too archaic,” he explained, “so we just use the future.”

Mr. Sharett, 40, has a day job at a television company, but has been giving private Hebrew lessons for several years. The students on his tours want terms they can use in everyday life; many are dropouts from ulpan, the immersion classes that are free for new immigrants. A recent graffiti tour included a Chinese postdoctoral fellow; a 28-year-old Google employee from Rhode Island; a financial analyst and poet who is married to an Israeli; a British teacher who has lived here 20 years; Ms. Sulak, whose 5-year-old daughter slept the entire hour in her stroller; and a Middle Eastern politics professor at the City University of New York who is on sabbatical.

“Street politics is where it’s happening,” said the professor, Dov Waxman, 37. “Most places, graffiti is tagging or art. Here, you can really read the politics. I wander around and look at it myself, but I don’t always understand it all.”

The graffiti mecca 5 Pointz is not just for visual artists, it is also a great venue and a supportive base for Hip Hop artists.

Considered the world’s premiere graffiti center, 5Pointz is an outdoor art exhibit space in Queens, NY. Graffiti artists, hip-hop stars and tourists flock to this legendary venue to be a part of the vibrant art community. 5Pointz fanatics say it’s a perfect place to find inspiration and express art freely. Today, 5Pointz faces the threat of being replaced by high-rises and industrialization, but the general public remains determined to preserve this NY landmark.

Support the continued existence of 5 Pointz and HooplaHa- Life with A Smile- www.hooplaha.com

The End is Coming for 5 Pointz According to Crains Business

In a short article I can only describe as disheartening, Crains announced that 5 Pointz is about to be demolished. It's article "Graffiti's Days Are Numbered" was released this week.

"In Long Island City, Queens, new buildings will replace a spray-painted warehouse." making it seem like it is one eyesore building blighting a gentrifying area. It is simply not so. I know. I have been to 5 Pointz many times and it is a huge complex - one large industrial city block that is situated in a highly industrial area of LIC. It is a presence. And its removal / destruction would be a tragedy.

I understand the obvious economics for a family to sell a building that it has owned for many years. But what if there was a conservatory such as the one created for the Highline that would raise the money, buy the property and preserve the art environment there?

When the 7 train surfaces in Long Island City, straphangers are greeted by an oversize likeness of the late rapper Notorious B.I.G. on a hulking warehouse covered in graffiti. Soon they are likely to see two shiny apartment towers.

"It was inevitable," said Mr. Wolkoff, whose family bought the building in the late 1960s, leasing space to manufacturers and working artists over the years. "We knew many, many years ago that Long Island City was going to change."

The city must first approve the Wolkoff family's request to increase the site's building size to 1 million total square feet from 400,000. Graffiti Gauguins might consider spraying at 5Pointz while they can: Demolition could take place as soon as fall 2013.

Ask the great travel company Lonely Planet where you can find the best street art and you will be surprised by their choices:

Ghent in Belgium looks pristine and its centre is a place of medieval lanes and timeless canals backed by an impressive castle. Yet the city’s large student population has got to burn off its creative juices somehow, and the solution is to be found on Werregarenstraat. This narrow lane is home to one of Europe’s longest legal graffiti walls, and you’re sure to find at least one street scribbler at work.

Download the Pittsburgh Arts Council’s free PDF walking tour (pittsburghartscouncil.org) to find your way to the Andy Warhol Museum, the modern art collection at the Mattress Factory, and riverside sculpture playing off the city’s ’three rivers’ location. A favourite, though, are the four-metre-long fish sculptures outside the Children’s Museum on the North Shore, a quick walk from downtown on the Andy Warhol Bridge.

In Melbourne, Australia, the city’s many ’laneways’ have been covered in graffiti, murals and posters. The likes of Banksy and Space Invader have tagged local walls – although, sadly, the local council painted over one of Banksy’s works, and the other was vandalised. Still, there’s plenty to see. Head along Flinders Lane, where art galleries sit alongside street art.

As for me, I would say Coimbra, Portugal or Berlin, Germany. And I am sure others would recommend places in South America. All the world is a canvas! 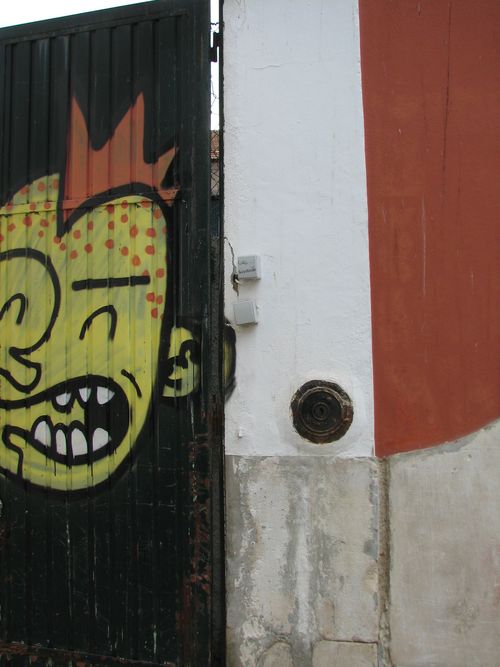 We decided to drive around Bushwick today to see if we could find clusters of street art and we hit paydirt. There is so much great work there it deserves a second, thrid and many more trips. I am sure we will never get to see everything, but will enjoy the continuous exploration. 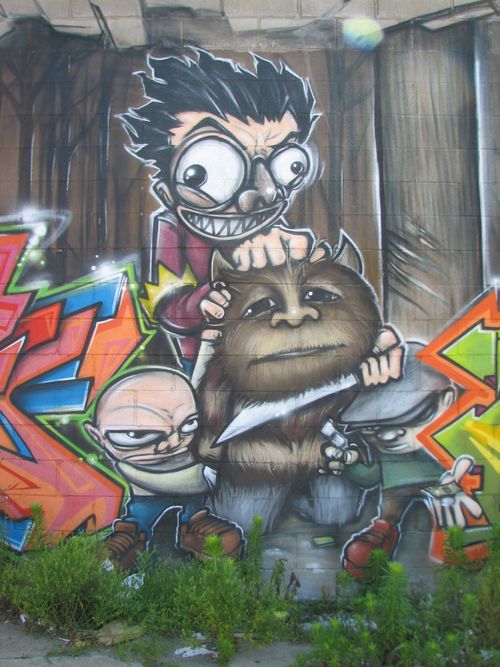 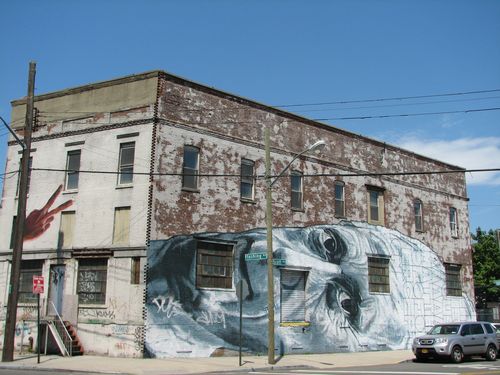