NuArt is a festival of street art. Although based in Norway, it boasts artists from all over the world. It is an event that should notbe missed - street art walking tours, movies like Exit Through the Gift Shop

, galleries, performances. Oh I wish I was in Norway! Here is a video to tantalize you....

NUART FESTIVAL 2012. "OUT OF THE DARKNESS" from NUART on Vimeo.

On September 19, 2012 the Doyle Auction Gallery in New York hosted a panel on Street Art. Curator Angelo Madrigale who is spearheading the effort by the auction house for the first ever Street Art auction on October 16, 2012at 10a. I attended the panel discussion which offered a fascinating context for street art and I look forward to seeing the results of the auction in a couple of weeks. Here is a short video of some of the panel discussion:

The WBAI benefit auction is now open for Preview. Bidding starts Oct. 1. There will be a live event and exhibition at Steven Kasher Gallery in Chelsea, on Nov. 7. Please join us there.

Community radio WBAI  (99.5 fm) is NYC's beloved progressive voice, in arts, culture and politics for 50+ years. I am happy to support them and encourage you to do so by participating in this event.
A most excellent catalog of photography, painting, sculpture and works on paper has been assembled from a group of distinguished artists. Please visit the preview, sign up for the auction newsletter and get prepared to start bidding on October 1.

During the Preview period all works can be purchased for 80% of estimated value.
And please share this email with your friends!
Links--
Auction: http://wbaiauction.org
Station: http://wbai.org

I mean the mysterious Banksy's true identity has been revealed!

This is the full article from Time. Yes, Street Art is now covered in Time.

For years the graffiti artist known as Banksy has been the art world's Deep Throat: a hugely influential figure whose identity remained shrouded in mystery. Now, like Deep Throat, he has been given a name.

Banksy is a 34-year-old native of Bristol, England, named Robin Gunningham, Britain's the Mail on Sunday reported on July 13. The thread that may have unraveled the mystery was a 2004 photograph taken in Jamaica, which many — including photographer Peter Dean Rickards — say is the only known picture of Banksy. (The artist's agent, Steve Lazarides, denied that the photo — which depicts a man in jeans and sneakers crouching above a can of spray paint — is of Banksy. A spokeswoman for the artist declined to confirm or deny the Mail's report.)

With the picture in tow, the Mail canvassed Bristol, unearthing former acquaintances who identified the man in the photo as Gunningham. A former schoolmate interviewed by the paper recalled that Gunningham was a talented artist, while Luke Egan, an artist who has jointly exhibited with Banksy, told the paper that he shared a Bristol flat with Gunningham in 1998. Asked by the Mail whether Gunningham was Banksy, Egan reportedly replied, "Well, he wasn't then." Gunningham, whose middle-class upbringing bears little resemblance to Banksy's renegade persona, has vanished.

Since striding onto the scene in the early 1990s, Banksy has vaulted from obscurity to international renown, all the while escaping detection. Among his catalog of greatest hits, Banksy has released an inflatable Guanténamo Bay prisoner doll at Disneyland, depicted England's Queen Elizabeth II as a chimpanzee, tagged the West Bank border fence and sneaked his own Mona Lisa — her inscrutable expression replaced by a yellow smiley face — into the Louvre. "He's kind of captured the zeitgeist," says Gareth Williams, a contemporary-art specialist at Bonhams auction house in London. "But he's done it in quite an accessible way, so it speaks to people." Even for a vandal, going mainstream has its perks: Banksy's handiwork has commanded millions of dollars at auction from acolytes like Brad Pitt and Angelina Jolie.

But anonymity has been as crucial a part of Banksy's mythology as irony and wit. "Anything that's ever been written about him centers around the anonymity — that he's this Batman, this cult figure," says Pedro Alonzo, who curated an exhibition in England to which Banksy contributed. But that doesn't necessarily mean being unmasked would hurt Banksy's popularity. The intrigue over his identity has been a "double-edged sword," Alonzo says, since it has occluded the messages bundled in his art. "His work is a call to action. It's about hierarchies of power, social injustice and paying attention to issues that aren't being addressed," he adds. "There could be a bright side to this — the attention being diverted from his identity [could allow] people to really look at his work and consider it." Says Williams: "I don't think the Banksy story ends here."

Pinpointing Banksy's identity has long been a popular parlor game, and it's yielded false positives before. Last fall, a passerby in the East London neighborhood of Bethnal Green snapped a camera-phone picture of a man spray-painting a mural later confirmed to be Banksy's. In May, the New York City–based media blog Gawker suggested that Banksy might be Nick Walker, a British artist who, after being spotted stenciling a mural on the side of a Manhattan restaurant, reputedly told an onlooker that he was the elusive artist. The precision and scope of Banksy's creations have led others to theorize that he may work with a partner or that Banksy serves as the nom de guerre for a group of conspirators.

If Banksy has indeed been identified, Williams doesn't think it will puncture Banksy's ballooning sales figures. But Jeffrey Deitch, an art dealer with close ties to legendary graffiti artists Keith Haring and Jean-Michel Basquiat, asks, "When you can buy a superb Picasso drawing for $500,000 and a work dashed off by Banksy for the same price, does that make sense to you?" Still, Deitch, who says he likes a lot of Banksy's work, adds, "I don't think it will have any effect on his output. He's established the brand."

What exactly that brand represents has never been entirely clear. Banksy is a paradox: he used his anonymity to court attention and became a commercial success by condemning consumer culture. "I originally set out to try and save the world, but now I'm not sure I like it enough," he wrote in an e-mail to the New Yorker magazine last year. If his veil has been lifted, the world will have a chance to make an assessment of its own.

Street Art is Now Main Street. The Beginning of the End.

File this under Gripes:

MSN has a "trending now" column that today talks about Street Art. I have very mixed feelings about street art "trending now". I am concerned that it will become commodified.  Street Art has been and will always be art. I think that the valuation (and sadly ultimate commodification) of graffiti via auction houses and galleries has moved public opinion to value it but even before it became "cool" it was always art. Once something has become "popular" it becomes ruined. Let's keep street art on the outside please. Oh, and by the way, "rad"?? That is soooo 2011.

Here is the MSN piece:

Best Internet comment on this piece: "We’re going to need a bigger wall." 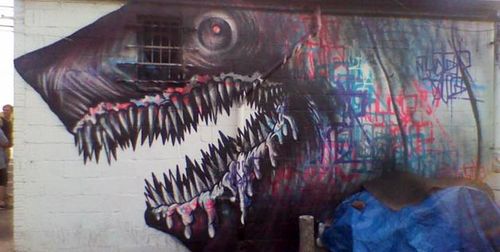 A stunning shot of a rebellious couple stealing a kiss while being led away in handcuffs after a self-described “graffiti spree” has been reigniting a cultural debate over art and graffiti. At its best graffiti is art in an unexpected place, but even at its most casual can be heartening evidence of the human spirit at play. (And at its worst can be pretty freaking annoying.) But, much like the couple, would graffiti be as striking if it weren’t sticking it to the man? As graffiti increasingly makes its way into galleries, with artists like Banksy’s illegal public works getting chiseled off walls by collectors, is graffiti cool because it’s outlawed? Or is good imagery rad no matter what? 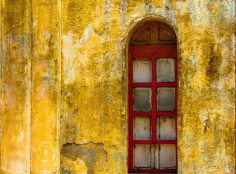 A little of this and a little of that typifies the intriguing website Environmental Graffiti. I like the Art and Design section which can have posts as diverse as "red windows" to "fireworks reflected in water"

Check out Environmental Graffiti and read about some popular yet bizarre history and see some neat design art. 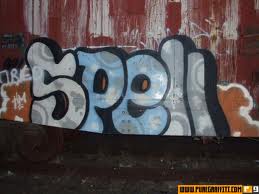 Sign up for a word a day and you might find out exactly what graffiti is.... LOL

MEANING:
noun: Words or drawing made on a wall or other surface in a public place.
ETYMOLOGY:
Plural of Italian graffito (a scratching). Ultimately from the Indo-European root gerbh- (to scratch), which also gave us crab, crayfish, carve, crawl, grammar, anagram, program, graphite, and paraph. Earliest documented use: 1851.
USAGE:
"Over the years, many lovers have carved their names and words of love on trees, and graffiti has become a problem."
Love on the Cheap for Valentine's Day; Shanghai Daily (China); Feb 12, 2012.

"$200 million is what graffiti artist David Choe is expected to earn from the listing. He painted Facebook's walls in 2005 and opted to get paid in stock options."
Larry Claasen; Facebook in Numbers; Financial Mail (South Africa); Feb 10, 2012.

Explore "graffiti" in the Visual Thesaurus.

Tags: graffiti, how do you spell graffiti

I wonder if this will encourage colelctors to remove art from the street....? 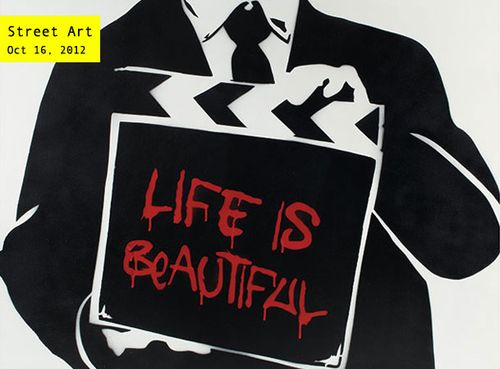 Our specialists are currently scheduling appointments to evaluate property for Doyle New York's Inaugural Street Art Auction on October 16, 2012. This landmark sale will be the first in the New York auction market specifically focusing on Street Art and Graffiti. Showcased will be examples spanning the late 1970s through the present day.

We are always available to discuss the sale of a single object or an entire collection.