Your Vote is Important

Tags: You Don't Own Me

Here is the next edition of the BSA newsletter.

Isaac Cordal in Zagreb and Vienna With His Little Men

The impersonal isolation of living inside a human hive, the unraveling of a threadbare social safety net, the militarization of the natural world, the impact of industrial activity on our environmental, and the brutal punches of a bankrupt monetary system set free.  How can Isaac Cordal address such weighty matters with such miniature sculptures?  Also, [...]

John Wellington At The Cell in New York City

Here is a video from the opening party at the Cell celebrating the extraordinary work of John Wellington. The exhibit is on until mid-November. John gives you all the details in this video at the end.

Yarn Bombing or Tree Hugging in the East Village

Here are a couple more examples of yarn graffiti - around trees in the East Village, NYC. Maybe they are getting ready for fall...? 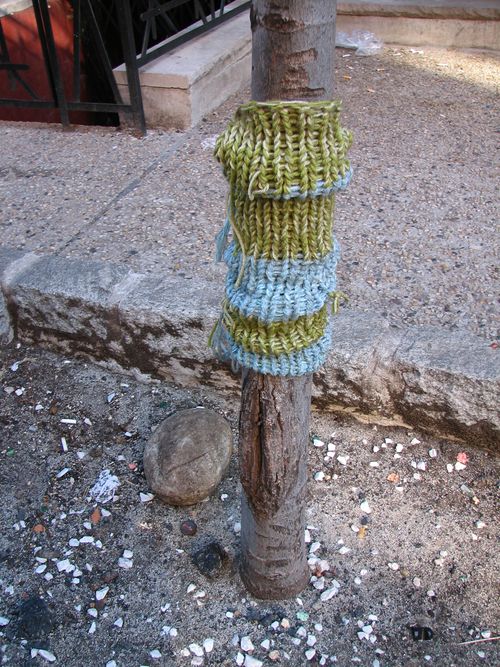 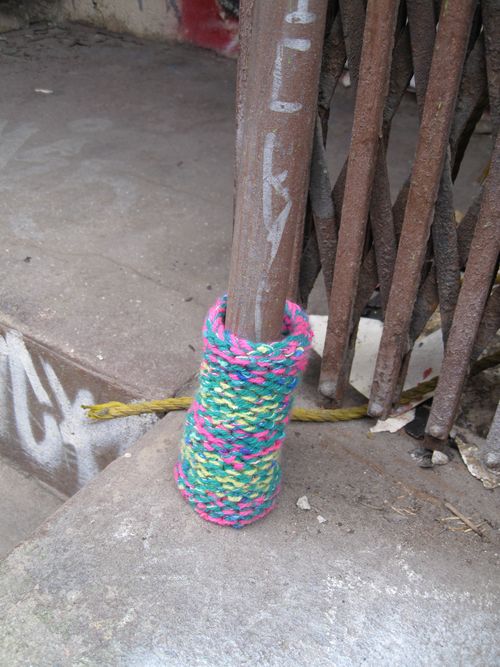 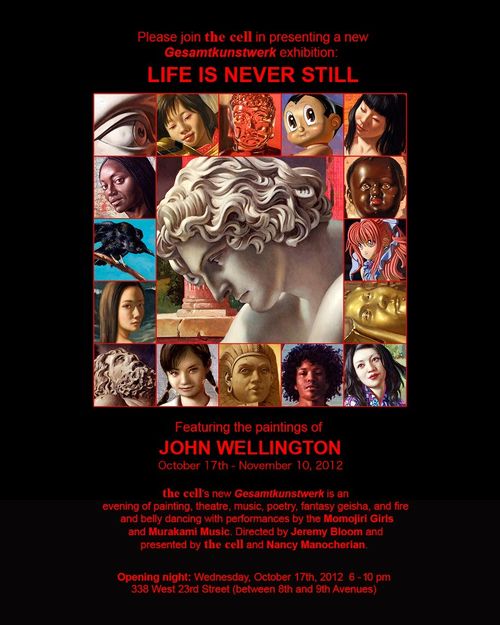 Support WBAI and Bid On My Art 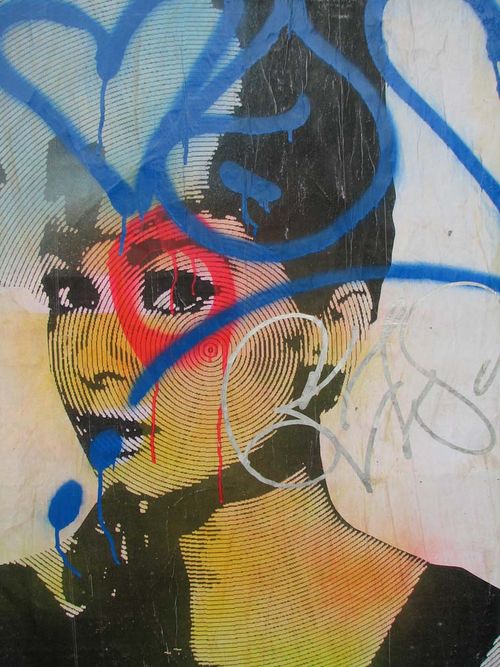 I have contributed my photographic artwork to the WBAI benefit auction (specifically to support David Rothenberg, Ivan Hametz and Chris Whent programs) and I invite you to bid on a wonderful range of artworks in all media by contemporary fine artists and photographers. There are several special items, including a 1969 Richard Avedon portrait of WBAI's then reigning announcers, as well as photos by Allen Ginsberg, Spencer Tunick, Alfredo Jaar and Barbara Mensch, prints by Kiki Smith, Faith Ringgold and Leon Golub, sculpture from Tom Otterness, Arlene Rush and Nina Sobell, and a limited edition Urban Montage photograph , by yours truly.

There will be a live event and exhibition at the Steven Kasher Gallery (521 W. 23 Street in Chelsea), on Nov. 7, beginning at 7:30pm.  Please join us there.
Community radio WBAI  (99.5 fm) has been NYC's beloved progressive voice, in arts, culture and politics for 50+ years. It is listener supported and I am happy to be a supporter and encourage you to do the same by participating in this event.
The auction website: http://wbaiauction.org. Take a look, it is an impressive collection! 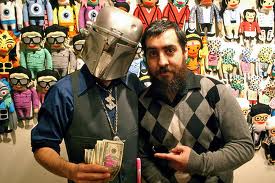 Angelo Madrigale, Street Art Specialist in the Paintings Department at DOYLE NEW YORK Auctioneers & Appraisers is preparing to make Street Art history with the first ever Street Art auction on October 16, 2012 with viewing from Oct 13-15. It is free so please stop by and check out some great art.

I sat down with Angelo and asked him the following questions. Here is his fascinating interview:

1.    When and where did you first notice that street art was becoming an art movement?

Angelo: In the early 90’s I first started noticing Shepard Fairey’s “Andre the Giant has a Posse” stickers, both on the streets as well as in punk fanzines. Being that I grew up in a very rural area, going into any city was always incredibly exciting, and anything urban made an impression on me – I wasn’t even used to seeing street lights! I have distinct early memories of graffiti at the Philadelphia Zoo, for instance. So when I saw stickers and wheatpasted posters, I really took note of it, even though I didn’t know what to call it at the time, or who was creating it. All I knew was that it was something different, and the mystery intrigued me.

2. What made you or the auction house decide to undertake the first ever street art auction?

Angelo: It’s been a long time coming. This is an important art movement that was born in America, and has become a worldwide phenomenon. It’s been maligned for years, and hasn’t gotten the credit I feel it’s due. I think Jazz and the Blues grew in the same way – American art forms neglected by Americans for years – until over time it became understood how very important it was. Now, we take great steps to document and celebrate Jazz and Blues, and the same will be true for Graffiti.

That being said, Europe and the UK have been holding successful auctions focused solely on this type of art for years now. It was only a matter of time until someone in the US was willing to take the chance, and I’m proud that Doyle is doing this. Success at the auction world is an essential piece in the puzzle for any movement of art to gain credibility in the art world. Hopefully what we accomplish with this sale helps these artists keep growing, moving forward, and gaining acceptance. The big picture is to level the playing field – just like it took time for great artists like Rauschenberg, Johns, and Warhol to be seen as highly celebrated master artists, it’s still going to take time for artists within this genre like Barry McGee, Kaws and Stephen Powers to be regarded that way. I’m confident it will happen, but it takes people championing that cause, long term.

3.    How difficult was it to find suitable lots for auction?

Angelo: The auction world and the gallery world are very different. Gallery shows can be curated a multitude of ways so that a particular theme or statement can be addressed. Auctions are not curated like a gallery exhibition; typically an auction house is not specifically searching for works by certain artists, but instead taking on collections, estates, and so on. For this sale, I wanted to cover about 30-plus years of Graffiti and Street Art history in the course of 46 lots, which was a tall order. I’m very happy with how the sale came together, and I think people who have been following the genre for years, as well as newcomers will both have the opportunity to see some really great art.

4.    Who do you think will be drawn to buy at the auction? (Your traditional buyers or new ones) and why?

Angelo: Something I wanted to do was keep the sale in the realm of affordability. There’s work in the sale with estimates starting at $400 and going up from there. There’s two reasons for this: for art collectors who are new to this style of art, it gives them the opportunity to begin collecting with relatively low risk. On the other side, something I really wanted to do was help out young collectors who haven’t worked with an auction house before, and walk them through the process. Bidding at Doyle affords people the opportunity to work with experts who professionally research the items we auction. So, I wanted to be approachable and accessible for people who have questions about authenticity, condition, the bidding process, or whatever their concerns may be. It’s an effort to be as available and transparent as possible so that everyone bidding enjoys doing so, and the winning bidders are excited about adding a great new work of art to their collection.

Angelo: Unlike most other art movements, Graffiti has grown and evolved over decades, with sub-genres and spinoffs within it. It will continue to evolve – as artists receive notoriety from the mainstream contemporary art world, there will always be new artists to take their place. Right now, there’s tons of young artists I’m excited to watch grow and create new, challenging work. Two of those emerging artists – ASVP and Lamour Supreme - I was able to include in the first sale to spotlight some great work being made right now. The next artists will push the envelope further and continue innovating.

6. How can one best discover street artists since their studio and gallery have usually been the street itself?

Angelo: Read as much as possible. There’s great magazines and fanzines out there, like Graffiti Art from France, and UP from Sweden, just to name two. There’s tons of blogs that cover Street Art shown both in public places and in galleries – Subwayartblog.com, Brooklynstreetart.com, Hyperallergic.com, 12ozprophet.com and tons more. They all cover well-known artists as well as new artists, and they also have lists of upcoming exhibitions and events. As long as you stay involved, you’ll have no problem  keeping up.

Here’s a link to the auction:

I love receiving this every fortnight. It is the Brooklyn Street Art Newsletter. Sign up and stay apace with what is going on in the Street Art World. Here is their latest edition.

Futura And The Origins of The Universe

In the beginning, there was Futura.
That’s kind of how this expansive space feels with no people in it.  It is a universe created by a post-graffiti graffiti godfather who has freed his own imagination to search for new planets of influence, new centers of intelligence.  Many of the New York graffiti artists who made names [...]