BSA News Highlights for the Week

5 Pointz Graffiti Mecca Has Been Destroyed! 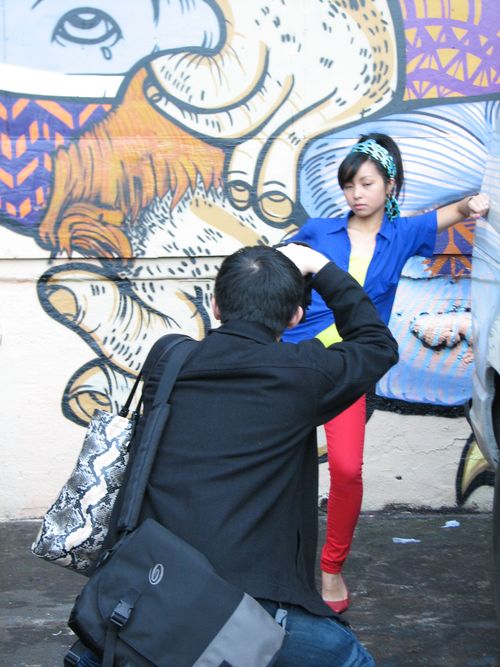 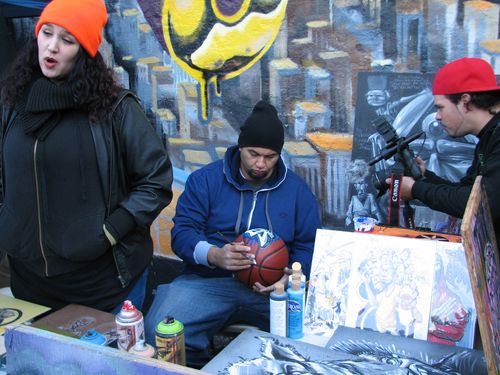 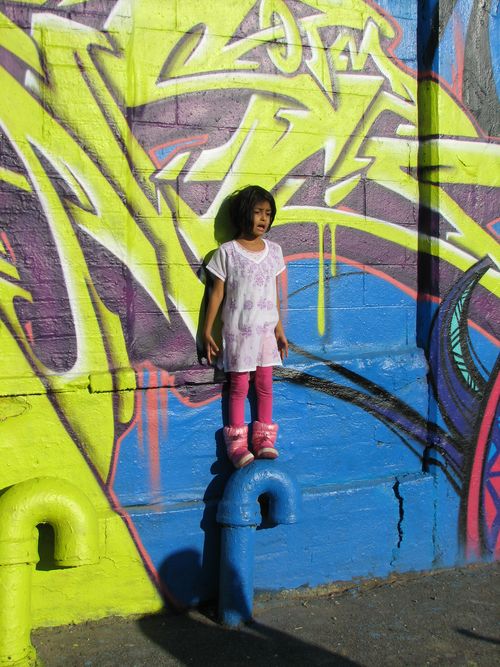 In a bald move by the developers, 5 Pointz, the graffiti mecca of the world was painted over in the stealth of night last night. Even the New York Times took note in its breaking news at 1:30 today, placing the news on the front page of its site above the fold.

We were there on Saturday (see the photos) afternoon for the peaceful rally. Who would have throught or imagined that it would be gone by this morning? My last video will be posted soon.

5Pointz, a Graffiti Mecca in Queens, Is Wiped Clean Overnight

By MARC SANTORA and CARA BUCKLEY

Usually, it is the street artists who work under the cover of darkness, hoping to evade police detection as they scrawl graffiti on property that is not their own.

But before dawn on Tuesday, it was the owner of a building in Queens who used a crew of painters to work overnight and whitewash the graffiti on a warehouse in Long Island City, wiping clean a canvas that was used by thousands of artists over the years to transform an otherwise nondescript, abandoned brick building in a working-class neighborhood into 5Pointz, a mecca for street artists from around the world.By morning, the work of some 1,500 artists had been wiped clean, the Brobdingnagian bubble letters and the colorful cartoons spray painted on the building’s brick walls all covered in a fresh coat of white paint.“We are supposed to be the vandals, but this is the biggest rag and disrespect in the history of graffiti,” said Marie Cecile Flageul, an unofficial curator for 5Pointz.

The plan to convert the three-acre site into a $400 million development project that will include two glass towers and 1,000 new luxury apartments had provoked opposition from artists and their supporters. But after months of public debate, court hearings and political maneuvering, opponents had little left in their arsenal.

In a last-ditch effort to stop the development, they were hoping to have the building designated as a landmark. That option is now likely gone as well.“I don’t know how you can erase 12 years of spectacular art,” said Hans Von Rittern, a guide who arrived with a busload of tourists, only to find the building’s art gone. “It’s cruel.”The warehouse is scheduled for demolition by the end of the year.

The property has been owned by the Wolkoff family for over 40 years, and for most of that time they allowed artists to use the building’s facade as they liked.It was the 1970s when Jerry Wolkoff bought the warehouse. At the time, people who tagged storefronts, subway cars and street signs were widely viewed more as menace than artist.Today, graffiti is more mainstream than outlaw, used in commercials, sold at auctions and stamped on clothing.The British street artist and presumable millionaire Banksy ended his recent monthlong residency in New York with the words “save 5Pointz.”

The Wolkoff family said they long planned to develop the site, but only in recent years has it become financially feasible.As a concession to the artists, David Wolkoff, Jerry’s son, told the City Council in October that he would raise the number of affordable apartments to 210, from 75, and include 12,000 square feet for artists’ studios, up from 2,200 square feet.He said he was a fan of the work of the people who turned his building into a work of art.“The artwork is absolutely fabulous,” he said at the hearing.

Jerry Wolkoff, 77, who bought the building in 1971 and has enjoyed the work of the artists who flocked to his building for more than two decades, could not help but get emotional Tuesday morning as his crews painted over the graffiti.“I cried this morning, I swear to you,” he said.Still, the painting of the building – which started after midnight and finished around 7 a.m., according to witnesses — was met with anger and surprise.

“Everyone was kind of shocked,” said Jeff Carroll, 33, who went to the building Tuesday morning only to find workers applying a final coat of paint.Mr. Carroll said he moved to Williamsburg from Seattle in September, and, while he was not a street artist himself, 5Pointz “was on the list of cool things that I should see.”He would return occasionally to check out what was new on the building, but he knew time was running out.Tuesday morning, he said, he was greeted by a police officer stationed at the warehouse and was told that if he caused any trouble he would be arrested.The graffiti was painted over before it could be formally celebrated, and supporters said they would hold a vigil Tuesday night.Graffiti has long been ephemeral but Mr. Carroll said he had hoped that 5Pointz would be granted a “stay of execution.”“I guess I got to see it just in the nick of time,” he said.

Here is what the Wolkoffs did to 5 Pointz. Yeah - they cried all the way to the bank.

If you find yourself in Richmond Virginia, be sure to check out the Richmond Mural Project which encourages street muralists to add their art to walls in the city. There are some amazing works by some prominant street artists. Eye catching, beautiful and immense.

Held in 2012 and again in 2013, this newly annual effort has a dual purpose - beautifying areas of the city with street art and creating a tourist attraction. Here is a link to a map for 2013.

Art Whino, with the help of RVA Mag, has kicked off the second edition (2013) of The Richmond Mural Project. The project is about street art, specifically large murals. According to RVA Magazine, "We are creating an open air museum that you can explore anytime you want. Art Whino is bringing a top notch group of artists from around the globe (who) will be adding over 20 new murals throughout the city. Combined with the 23 that were created last year with the G40 Mural Project, the result is like a giant treasure hunt. So go have fun! Oh, and make sure to tag any photos you post on Instagram with the hashtag #richmondmuralproject, and follow our Instagram for daily updates:

Steve Schlackman, writing for the Art Law Journal, discussing the change in public perception of street art from crime to urban asset. In part he writes:

Whether graffiti is art or crime has an implication in protecting the integrity of a street artist’s work. If considered art, the creative works might be shielded under the Visual Arts Right Act (VARA). VARA protects the work of visual art, from intentional distortion, mutilation or other modification. As a crime, these works can be washed away without further consideration, as has been the fate of many.

Street artists across the country have been fighting back using the VARA argument. 5Pointz, an outdoor art exhibit space in Long Island City, New York, is considered to be the world’s premiere “graffiti Mecca.” Since 1993, with the property owner’s permission, artists have been creating unique artistic works on numerous walls of a 200,000-square-foot factory.  5pointz has now become a tourist attraction, with hundreds visiting each week.  Now, the building is supposed to be razed to make way for a luxury apartment complex.  Sixteen artists have sued to preserve the space citing VARA.  They are currently seeking a temporary injunction.

Los Angeles, often on the forefront of intellectual property issues, recently passed a new murals ordinance making street art legal if you pay for a permit, get permission from the location, and publicly post your intentions. Shepard Fairey, best known for his Obama Hope poster and his Obey campaign, has teamed up with renowned graffiti artist, Risk to create a major piece in Skid Row. Another work will be painted in the Arts District by culture-jamming contemporary artist, Ron English.

I am very happy to see that lawyers and legal bodies are examining the value of street art rather than describing it as a crime. And it is my hope that VARA can be successfully used to stop the destruction of 5 Pointz and enable the art of the street to survive and thrive. 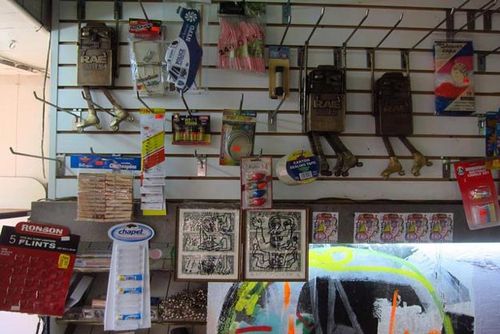 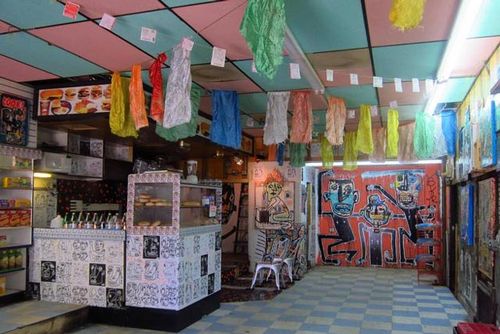 Street art isn’t something that can only appear in abandoned buildings, as proven by  RAE’s ”Word Of Mouth” piece in the East Village that takes over an everyday bodega and transforms it into a living piece of art. Alongside everyday items such as bread, beans and lotto tickets, you can find a huge variety of drawings, paintings, stickers, and sculptures that cover the walls and other surfaces in the store.

So when you buy your morning cup of coffee on 12th Street and Avenue C in New York City, pick up a piece of street art as well.

Is Street Art Losing Its Edge? Video on PBS

This is a subject that I have pondered for a while - what happens when street art goes mainstream? When it becomes acceptable and even encouraged? When the galleries and auction houses start pricing it? Does it lose its edge?

The Beginning of the End of Street Art

I have been following street art for years. I have photos from Florence Italy in 1974 of graffiti (for that is what it was called in those days). The evolution of graffiti into street art has been gradual and exciting. And now, especially with Banksy's NYC installation month completed, street art is now in the forefront of the public's affection with art.

Is this good? I am ambivalent. On the one hand I am thrilled that street artists are getting the recognition they deserve. On the other hand I am concerned that street art will lose its edge, which is what makes it so exciting and attractive to me. Here is a video of a short special recently on PBS highlighting Banksy and interviewing Steven Harrington of the always great Brooklyn Street Art blog.