Hybrid Sneakers
My Arm The Comic - Comic Strip Via Tattoo

Graffiti In The Living Room - A Tipping Point?

With a mixture of delight and concern, I note the recent article in the Wall Street journal about people with very large living spaces who are hiring street artists to paint murals on their walls.

One the one hand I love their support of the artists and their love of the art form. Bravo! On the other hand, I wonder if the domesictation of street art will dull its edginess and vitality. I suppose we will see. But in the meantime, I am thrilled that there are those art lovers who see street art as a desirable and beautiful art form that it is. Support Street Art and Street Artists!

Here are the highlights:

Graffiti in the Living Room

Graffiti is coming in off the streets and into the house.

"Five years ago, it was all about graffiti in the galleries. Now, it's about showcasing it in your home," says Gabriel Specter, a 35-year-old Brooklyn street artist who for the past 16 years has had both private and corporate clients. He typically charges between $10,000 and $30,000 for smaller works and as much as $100,000 for larger projects, he says.

The medium is particularly hot now thanks to artists such as Banksy, the pseudonymous U.K. painter whose works most recently appeared on the streets of New York. In February, a Banksy mural, "Slave Labour," originally painted on the wall of a London retail store, sold at a private London auction in June for $1.1 million.

But while the work of famous names can sell for millions, the average homeowner can buy similar art for about $40,000 or less.

Deana Dyal, 42, a stay-at-home mom in Los Gatos, Calif., was looking for a creative way to decorate her living room when her interior designer suggested a graffiti wall. Ms. Dyal had her doubts.

"I couldn't immediately picture it at first," she says. Her home is an 8,000-square-foot, six-bedroom, six-bathroom Spanish Colonial that mixes modern furniture with Mexican heirlooms. 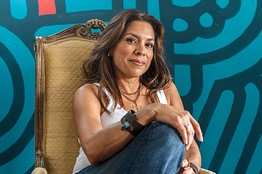 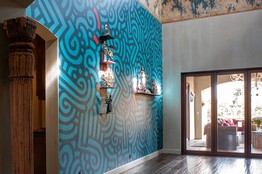 She decided to meet an artist, Aaron De La Cruz, at a restaurant to discuss a potential project. "The restaurant had some of his work on display and suddenly it clicked. It was tribal, adventurous," she says. "It was everything I was looking for. It fit."

Mr. De La Cruz, 33, is known in the San Francisco Bay area for his geometric designs. In Ms. Dyal's house, he painted a floor-to-ceiling mural of repeating patterns that covers an entire wall of the living room. Ms. Dyal declined to disclose the cost.

The 9-by-30-foot mural is done in shades of blue with scattered red accents to complement her collection of Day of the Dead figurines. Above the mural, about 6 feet of wall has been painted to look textured and worn, with thick layers of peeling paint. It was designed to make the room look like it had been repeatedly painted over the years.

Being able to snag a top graffiti artist has become a status symbol. "We deal with a lot of celebrity clients and a lot of hedge-fund guys who want to say they have an Alec Monopoly or a Banksy in their living room," said Avery Andon, who owns Andon Artists in New York. He represents a number of street artists, including Alec Monopoly, an unidentified American whose work typically shows the mustachioed, top-hat-wearing, board-game character.

"It's like looking at a Mercedes and knowing it's a Mercedes, except it has this gritty, insider edge," Mr. Andon says.

He says one Manhattan hedge-fund manager commissioned an Alec Monopoly homage to Patrick Bateman of "American Psycho" in his bedroom. The 4-by-5-foot piece cost $25,000. 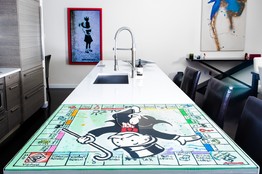 Full House: Brian Edelman fills his home with graffiti-inspired art. His kitchen has a commissioned Alec Monopoly, while a TV screen shows a Banksy. Bryan Derballa for The Wall Street Journal 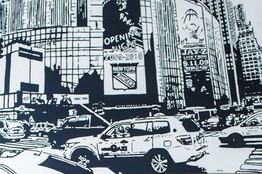 Mr. Edelman hangs a drawing by Sonja Komljenovic over his sofa. Bryan Derballa for The Wall Street Journal

Brian Edelman, chief executive at Rain, a digital-advertising agency, commissioned Alec Monopoly to paint a graffiti-inspired game board onto his kitchen counter and to spray-paint Monopoly Man onto a pocket door in his loft in New York's West Village. Mr. Edelman, 32, says he is a friend of the artist and received a discount for the work. Mr. Andon estimates the projects would retail for about $35,000.

"I'm not an expert on graffiti artists, I just like that style," Mr. Edelman says. "It's modern, it's different. I like colors in art and design, and was naturally drawn to some of this street-style work."

The market for high-end graffiti and street art attracts buyers world-wide who collect it in the form of sculptures, canvas paintings and commissions, says John Woodward, owner of a street-art gallery in Lower Manhattan. He says the difference between street art and graffiti is that street art is considered an elevated, mixed-media extension of traditional graffiti, and is usually created for exhibition or sale. Graffiti is raw, illegal street tagging done by artists who remain anonymous for their protection.

Andres Galvan, a Los Angeles interior designer, recalls the first time a client requested street art. "They started talking about Banksy," he says, "and I was instantly excited."

He says the client, based in London, bought a Banksy to display alongside an existing collection of works by Pablo Picasso and Salvador Dali. "I thought, 'How amazing that we're hanging street art next to Dali.'"

Write to Megan Buerger at megan.buerger@wsj.com