I am a great fan of pottery but never thought that animation and pottery could go together! Who knew? So this video of such a collaboration is quite an eye opener. Animator Jim Le Fevre, artists Roops and Al Johnstone of RAMP Ceramics, and documentary filmmaker Mike Paterson created a film featuring a ceramic zoetrope for the Crafts Council.

A zoetrope is a device that creates an illusion of motion with static pictures. The group collaborated to create a clay pot that has prints of static birds and displays an animated show when spun at high speed. The project showed how the art of pottery can be merged with experimental animation. Watch the film about the project below.

This video needs little introduction except to say that his work captures an immediacy and an essense that really helps explain the power of photography.

One Little Hammer: Randy Olson from Blue Chalk on Vimeo.

I guess this was bound to happen....

Enjoy graffiti art. Drink Jameson. Sip complimentary Jameson Whiskey with your Wynwood graffiti murals tour. We will stop at galleries that exhibit graffiti and visit graffiti sights through the Wynwood Art District by artists like Retna, Os Gemeos, How & Nosm, Invader, Liqen, Nunca, Shepard Fairey and more. (Actual tours will vary.) Tour guests will receive a Jameson sticker that will entitle them to half price Jameson at Bar TBA for the remainder of the evening.

If you are in New York City and are interested in the history of New York graffiti, check out the Museum of the City of New York and the City as Canvas exhibit.

The exhibit is from the collection of Martin Wong who saw the beauty and the value of graffiti and collected amazing artifact and art from that era and bequethed it to the museum. The exhibit showcases original art, sketch books, jackets and other types of memorabilia. A must see for graffiti fans. 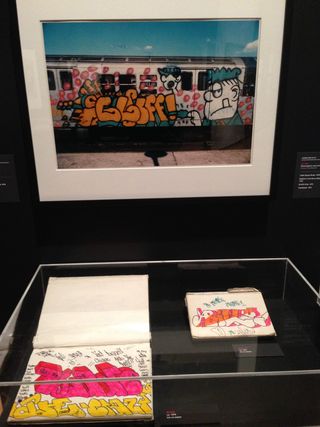 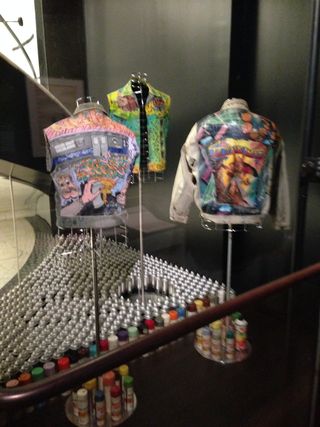 I was there last night for a panel on New York subway graffiti in the 1970s and fondly recall that time when our subway cars showcased some of the most beautiful graffiti ever. The first era of subway graffiti was dubbed "Broadway" because it started on the IRT Broadway line (the number 1 train) and around 1972-73, it moved to the 23456 lines (also IRT) in the Bronx. I remember all those trains and how beautiful they looked. I traveled the 1 train every day to school in those years. The most beautiful stations were 145th and 157th streets where graffiti covered the walls from floor to ceiling. I am so happy that this is being recognized for its artistic value and stature in the art world as a movement.

Now we just have to get back 5 Pointz.

The exhibit is open from February 4 - June 27, 2014. Plenty of time to get there. There is also a great companion book called City as Canvas: New York City Graffiti From the Martin Wong Collection

which you can order online.

Tags: City as canvas, The Museum of the City of New York 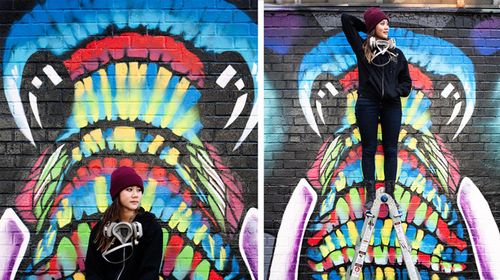 Time Out New York is a great supporter of Street Art. They covered my work a couple of years back when I had an exhibit on Staten Island. Just recently, they interviewed street artist Vera Times. Here is a link to the full article.

Tell us about this painting. This is my wall across from 5 Pointz. My roots are in graffiti, but I got bored of just writing my name over and over again—so now I’m focused on creating quality pieces like this. I’m part of a five-person street-art collective called A Dying Breed (adyingbreednyc.com), and we call this wall ADB Alley because we paint there a lot. We push each other so much—if one person does something really dope, it’s like, Aww shit, I need to step my game up.

Describe your game. Well, I grew up in a poor, Asian-American, working-class family—my parents are refugees—so I’ve always been down for underground subversive cultures. But as much as I’m into the politics of street art—the idea that those marginalized by society can get visibility—my art itself is actually more visual than political: I love bright colors! And I’m really into painting elephants.

Awesome. Why? They live in matriarchal societies, which I respect because being a girl in a very male-dominated culture is hard. I think a lot of people see a girl with spray paint and automatically think she’s gonna suck. So I’ve always been a little insecure and shy about my work. That’s why it’s nice being part of ADB. I feel like I have a space in the street-art scene.

Speaking of the scene, what are your thoughts on Banksy’s recent residency? I couldn’t get behind it at first. My thinking was, If his name wasn’t on there, people wouldn’t be flipping out about, like, a stencil and a dog. But then he did the Central Park sale, and I thought, Yeah, I respect that. For someone who’s already rich and successful, it’s cool that he’s still making an effort to challenge the state of street art today.

Which is what? Have Banksy and 5 Pointz changed things? Some people think that when it’s authorized or commissioned, it’s not street art anymore—it’s just a mural. But I don’t think there has to be an element of illegality. As long as it’s visible and free for the public to enjoy, that’s street art.

So do you ever go out at night illegally? Yes, but I’ve never been arrested, fortunately. I have plans to go out soon. Just keep your eyes peeled around the city! That’s all I’ll say.

What is the Future of Street Art?

Street art by its very nature is subversive, changeable, ephemeral and edgy. Thatis what gives it its allure. So when street art becomes popularized, gentrified, sanctioned and mainstreamed, you have to wonder if it has a real future. Graffiti meccas like 5 Pointz have been destroyed. Banksy's month in New York drew crowds of people caught up in the excitement and money-making aspects of it. So where does that leave us?

RJ Rushmore has an idea, according to PSFK's News You Can Use.

The connection between Banksy, animated GIFs, and business might not be immediately obvious – other than their popularity in the early 2010′s. One seems intensely contextual and linked to the actual world, while the second is portable and a product of recent internet culture.

Street art prodigy RJ Rushmore, however, has spent time in the communities that spawned both. Viral Art is his new free eBook, and it compiles two and a half years of research into a common history. Full of fascinating stories from the early graffiti era as well as great new internet artists to discover, Rushmore’s collection spans stories across a multitude of media: photography, fine art, ‘zines, films, and more. The salient connections he sees between street art and what he terms “viral art” on the web, though, are more important to him than the differences, and they provide a useful map for many on how to get a concept circulating across diverse audiences, whether your product is a friend’s zine or an award-winning ad for a major company.

Rushmore, who is the editor of the street art blog Vandalog, conceptualizes the internet as fostering public art in a similar way to the streets because he argues that both are public spaces. A new population of amateur photographers and their sharing tools, such as Flickr, has created a loose online community that puts more art in front of users’ eyes than ever before at little cost and high saturation. In particular, he sees Buzzfeed founder Jonah Peretti’s ‘Bored at Work Network’ as a crucial sharing and pioneering audience that finds art and edification where others might not expect. And far from declaring street art a casualty of the web, Rushmore highlights several examples of street artists’ responses to the web’s effect on viewers’ presence and responses.

These discussions are particularly relevant to our ongoing investigation of the power of online vs. offline events in the world of retail. Though the online world increasingly seems to back everything in business, offline events still grab attention in inimitable ways that, like street art, never occur the same way twice.