There are two instances recently of the evolution of tattoos.

One is 3-D tattoos which are often geometric but are sometimes graphically organic. My first reaction is horrified. My second reaction is intrigued. These three dimensional looking tattoos sometimes go over the top. I am not sure I could live with one. But they are certainly attention getters. As described by PSFK - 3D Tattoos Jump Right Off The Skin Like the shift from medieval paintings to Renaissance onces, so is the shift in tattoo art a lesson in perspective. There is currently an ongoing rise in three dimensional tattoos, that cleverly use shadowing and contrast to create the illusion of an image literally coming off or out of the skin. Adding a new dimension – both literally and figuratively – to tattooing, injects the genre with a renewed sense of wonder. The second trend is truly art driven. As described by PSFK - Cyborg Instrument Reads Tattoos Like A Musical Score Media artist Dmitry Morozov has created an instrument that uses tattoos as musical notation. The Tattoo Sound Controller uses black lines’ sensors that are mounted onto a railing that the wearer attaches to their arm. Morozov’s aim is to ‘represent the artist and his instrument as a creative hybrid’, transforming his tattoo from merely abstract lines to a musical instrument. I am honored to participate every year in the commemorate Chalk Project.

Here is the background for this meaningful art memorial project:

The Triangle Chalk Project commemorates the women and men who died in the Triangle Shirtwaist Factory Fire in 1911. This horrific fire which claimed the lives of 146 garment workers - mostly young immigrant women - helped launched the unionization of the industry.

The company employed approximately 600 workers, mostly young immigrant women, some as young as twelve or thirteen and worked fourteen-hour shifts during a 60-hour to 72-hour workweek. According to Pauline Newman, a worker at the factory, the average wage was six to seven dollars a week, at a time when the average yearly income was $791. A fire started on the 8th floor of the factory building in Greenwich Village. Women and men on the 9th floor soon became trapped - the owners of the factory locked the doors so the workers could not leave early or take breaks. Fire truck ladders could not reach higher than the 4th floor of the building. There was only one way out - they jumped out the window ... to their deaths. The scene was devastating.

Every year volunteers go to the doorsteps of those who died and write a memorial to them in chalk on the sidewalk. The full Memorial Ceremony is marked every year on March 25 - the day of the fire - outside the factory building located at 23-29 Washington Place beside Washington Square Park in Manhattan. The shirtwaist factory is now called the Brown Building, and is part of the New York University campus. Read more about it on Sue Katz's NYC blog. 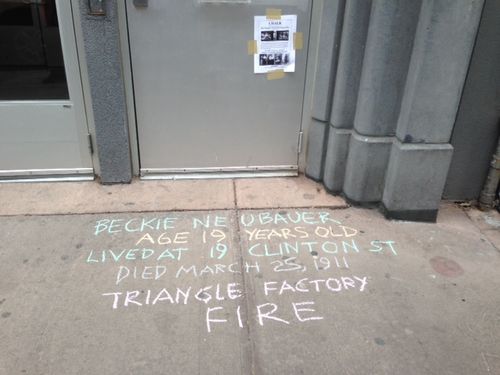 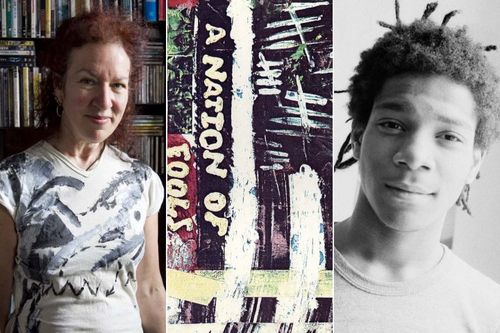 Alexis Adler, once girlfriend of the artist Basquiat, has an extremely unique collection of his work. As reported by the NY Post, even her bathroom door had his art on it.

Before he shot into art-world superstardom and (briefly) Madonna’s arms, the then-18-year-old covered the walls, furniture and floors of their East Village apartment with his trademark symbols, scribbles and scrawls. In time, his works — on canvas — would sell for amazing sums; last year, Christie’s sold one of his paintings, “Dustheads,” for $48.8 million. He was at the height of his powers when he died in 1988 — a victim, says Adler, of heroin and overpowering pressure. He was 27 years old.

Adler, meanwhile, married, had two children and divorced without ever leaving the railroad flat that she and Basquiat shared from 1979 to 1980. Nor did she erase anything he’d left behind — the “Olive Oyl” he painted on the living-room wall, the “Famous Negro Athletes” he inked on a door.

Now, nearly 35 years after they parted, Adler’s putting almost all of it on the auction block — lock, stock and door. “It became a burden,” she says of the 40-odd pieces that Christie’s is billing as “Jean-Michel Basquiat: Works from the Collection of Alexis Adler,” a monthlong exhibit and auction through March 26 at Christies in NYC. “I couldn’t hold onto everything, or leave it in a safe-deposit box. It’s not fair to Jean! It needs to get out into the world.”

Basquiat’s work will be on public display Saturday through March 28 at Christie’s, Rockefeller Center, 1230 Sixth Ave., 20th floor. See it before it closes.

One Last Protest at 5 Pointz

The hulking shell that was once the most magnificant graffiti location in the world had its last protest.  Last weekend, street artists GILF X BAMN collaborated to create this installation, which is a commentary on the destruction of the graffiti and street art hub that was 5 Pointz. (image by Andy Kim via Wooster Collective) 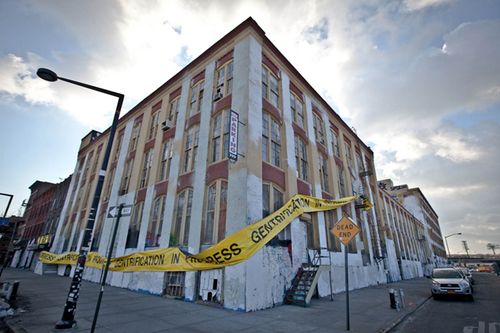 Call this crazy weird. Call this genius. I love these new three dimentional nail manicures, though I think having them would make me dizzy!

The background: A collaboration by NYC-based digital artists Sarah C. Awad and Dhemerae Ford, also known as the Laser Girls, created 3D-printed nail art featuring adhesive nails with unique and extravagant patterns that can only be achieved with 3D-printing technology. The 3D-printed adhesive nails show another potential application of the technology in the beauty industry. The designers are currently in residency at the Museum of Art and Design in New York. The designs are available on their Shapeways shop.

The Baltimore Love Project expresses love by connecting people and communities across Baltimore City through love themed murals. A few years ago, local artist Michael Owen developed a design of four hands spelling out the word love. (see above graphic) Now this image will be painted on 20 walls, spread evenly across the communities of Baltimore City. The murals will be identical in regards to content, only ranging in size.