Beautify Earth, which is based out of Santa Monica, is helping to organize mural painting on more than a dozen walls along Rockaway Beach Boulevard, and will also organize community cleanups and create a sculpture garden. The goal is to bring something positive to the peninsula, which is still slowly rebuilding after the devastating 2012 storm. 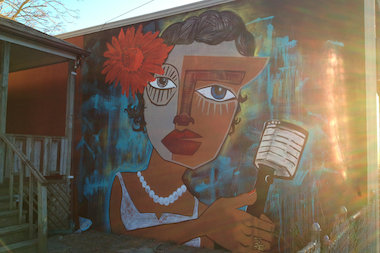 The positivity will hopefully allow “residents to become more engaged with their neighborhoods,” said Josh Manes, the east coast director of the program. Resident Matthew Villetto, 31, a senior project manager with Douglas Elliman Real Estate, reached out to the arts group months ago, realizing how significant it would be to have world-renowned artists to spruce up the bare exterior walls of local businesses. "My focus is on the social and economic impact this project will have on the community,” said Villetto, who’s working as a project leader and lives close to the first completed mural. He presented the plan to the community board, which loved it, he said.

In February, artist Alice Mizrachi turned a brick wall next to Sayra’s Wine Bar between Beach 91st and Beach 92nd streets into a mural featuring the legendary Billie Holiday. The next project starts this week and will be painted by Italian artist Alice Pasquini, who has worked in places such as Paris and Oslo. He also is planning to paint a mural uptown. It’s the first of three murals she’s scheduled to paint in New York and New Jersey, and she’s been inspired by the diversity and history of Rockaway, Villetto said.Other walls will be painted by artists including Chris Stain, Mitchel Coffman and Cernesto, he said.