The Burning of the Heidelburg Project

When a neighbor who travels to Detroit often told me about how the buildings in the Heidelberg Project were being burnt I was shocked. Why would anyone purposely burn down these amazing art installations? I really don't understand people. 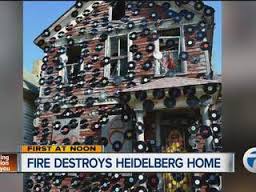 Here is the gist of it:

DETROIT (WWJ) - A fire has destroyed one of the few remaining houses at the famous Heidelberg Project in Detroit, which has been targeted by arsonists for nearly a year. The fire broke out early Friday morning at the Party Animal House, at the corner of Elba and Mt Elliot streets, which had dolls and stuffed animals covering the exterior.

Firefighters rushed to the scene, but the home was already engulfed in flames. All that remains now is the cement foundation and a pile of rubble. The house next to the Party Animal House is still standing, but has some fire damage on the second floor. No injuries were reported.