WhiteWash 5 Pointz Art Show Opening on April 5, 2014
The Burning of the Heidelburg Project

We Have Crossed the Rubicon in Street Art

Put the emphasis on ART when you say street art, pal. Here is an exclusive from TMZ - someone who defaced a Banksy will be prosecuted and possibly jailed:

Street artist Banksy has obviously gone to a whole new level when he is the subject of TMZ EXCLUSIVE!!!!! reports. Here’s the latest!!!!

David William Noll has been charged with FELONY vandalism. According to the criminal complaint — obtained by TMZ — Noll defaced 2 of Banksy’s most famous works — Girl on Swing and Peeing Dog.

Why didn’t Banksy get arrested for his initial vandalism?

The D.A. says the only way they will prosecute for vandalism is if the property owner complains — and Banksy got lucky … no one complained about his art … but they definitely weren’t into Noll’s handiwork.

This isn’t the only Banksy taunting going on in YouTube land. Another artist — perhaps the same man? — vandalized two protected works by Banksy in Park City, Utah, destroying one completely. But don’t worry, as last week a painting conservator was hired by the Park City building owner to save it. No, really: 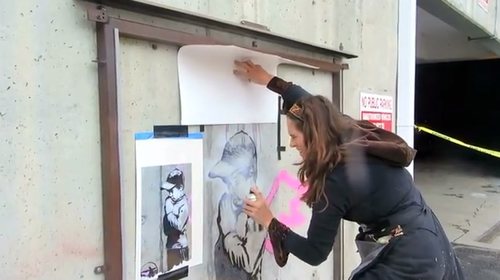