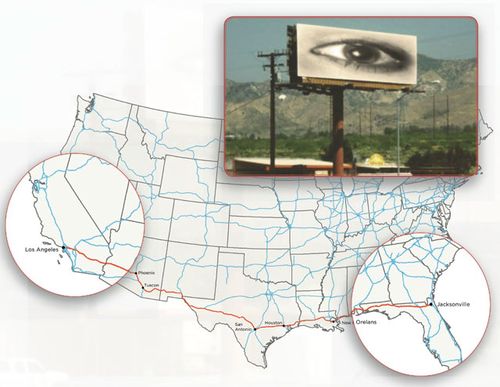 Hypoallergic reports a fascinating national project that hints of a massive rollout of street art in an ususual and novel way.

A few months ago, five national museums and the Outdoor Advertising Association of America announced Art Everywhere, a massive exhibition that will bring reproductions of artworks to advertising spaces around the country in August, decided via a public vote. “Billboards are the last bastion of the icon,” artist Zoe Crosher says, “because they work so fast. The images have to be fast, dirty, quick, and really loud.”

But what if you tried to give the people something different, something they may not even know they want? What if you put commissioned works of contemporary art on billboards?

That’s the idea behind Crosher’s The Manifest Destiny Billboard Project, produced by public art organization LAND (Los Angeles Nomadic Division). Crosher and LAND Director Shamim M. Momin, co-curators of the project, have chosen 10 artists to create roughly 10 billboard artworks each at 10 locations along Interstate 10. I-10 is the southernmost transcontinental highway in the US, running from Jacksonville, Florida, to Santa Monica, California. Beginning last fall and continuing through next spring, the billboards are unfolding along the highway in sequential chapters from east to west, tracing the path of many a contemporary road trip and the footprint of many a 19th-century settler.

The art is rolled out in chapters - four so far going across the US. Unfortunately, the Manifest Destiny Billboard Project is barely trackable: very few people will see them all, and those that to see any of them may not even know they’re art. This is, in Momin’s words, “the challenge of trying to work in a truly nomadic fashion and truly public way.” Descriptions and photographs — in addition to a Manifest Destiny Billboard Perfume that Crosher’s made with the help of the Institute for Art and Olfaction (scents included: car, whiskey, dust, jasmine, and musk) — are most of what the project leaves behind. But “in some way it almost doesn’t matter,” Crosher says. The billboards “exist in the imaginary. You know that they’re unfolding.” And if you’re lucky, you’ll get to see one along the way.

The next chapter of The Manifest Destiny Billboard Project, Eve Fowler: it is so, it is so, opened last week - June 21 - at The Brandon (1709 Westheimer Road) in Houston, Texas.