THIS is why I love street art - it can make anything more beautiful. Look at this drab and dreary building. Could it be any uglier? But add a little creativity and street art and you have a masterpiece! 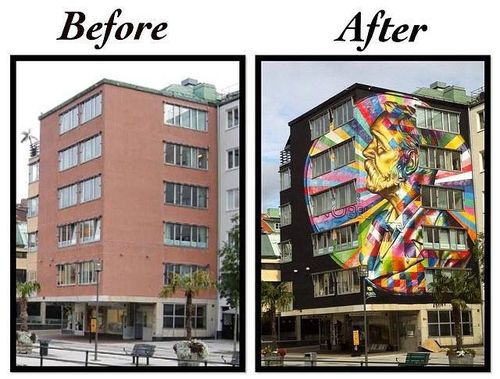 Can Graffiti Be Copyrighted?

There has been a bit of a brouhaha recently regarding the appropriation of street art to sell products and showcase fashion etc. This article by Gabe Friedman is a great overview of the situation. In my opinion if a piece of work is sanctioned by the building it is on, it is copyrighted. That should be a given.

Now, for those pieces of work that are spontaneous and not applied with permission of the owner of the building I still think much of it is under copyright - especially if it is signed. An example is Judith Supine who copyrights all of his worka nd signs it no matter where it is applied. But I think all else is license free - the scrawls, the detritis etc - and I have to add that THAT is the type of art that I capture in photographs. Here are a couple of examples:

Here is the article - you decide.

Can Graffiti Be Copyrighted?

Some of the most public artists want to keep their work a bit more private.

This past spring, Miami street artist David Anasagasti’s work started popping up in Japan and South America. It was the type of global exposure that Anasagasti didn’t want: American Eagle Outfitters had built an international advertising campaign around his best-known, oldest image—half-squinting, drowsy eyeballs layered on top of one another. In the ads, young adult models wearing American Eagle clothes frolic in front of his art. One shot featured a model holding a spray paint can, grinning, with Anasagasti’s street mural prominent in the background. Additionally, American Eagle allegedly hired artists to recreate the eyeball painting on an eight-foot-tall panel outside a store in Medellin, Colombia.

Anasagasti, a burly, heavily tattooed, graffiti artist in his 30s who goes by “Ahol Sniffs Glue,” didn’t like being associated with the teen and young adult-oriented American Eagle. “Just imagine you’re doing something for 20 years, then all of a sudden, you’ve got people coming up to you saying, aren’t you that guy that American Eagle did this to?” said Gregg Shienbaum, whose art gallery represents Anasagasti and who is acting as his spokesman.

In July, Anasagasti hired a lawyer and filed a copyright-infringement lawsuit, accusing American Eagle of stealing his work and seeking monetary damages. If it sounds novel to apply copyright to graffiti art, that’s because it is: Lawyers who work in this area say it’s not clear anyone has ever tried this in court. Copyright law, as its name suggests, lays out the rules for when it’s okay to copy something. But does it extend to art that's on public walls?

It very well may. “Given what I know of the case, this is one of the most blatant examples of copyright infringement,” said Philippa Loengard, assistant director of Columbia Law School’s Kernochan Center for Law, Media, and the Arts. American Eagle declined to comment for this story citing the ongoing litigation.

Anasagasti is not the only graffiti artist to seek protection for his work: In August, a spate of other artists with street murals filed suits against various corporations for copyright infringement. One targets Italian fashion designer Roberto Cavalli for creating clothing, bags, and shoes that allegedly misappropriate a San Francisco street mural as its background print. Three street artists sued film director Terry Gilliam and several film companies to block his new movie, The Zero Theorem, from release in U.S. theaters this month because its set design allegedly copies their Buenos Aires mural. Another artist filed suits against apparel company Coach, Sony Music, and the singer Sara Bareilles for allegedly copying her New York City street mural. All the artists claim their artwork was created legally and registered for copyright.

“As a matter of American law, the bar is very low” for obtaining copyright for visual art, explains Jeanne Fromer, a co-director of the Engelberg Center on Innovation Law and Policy at New York University School of Law. Fromer says there are only two requirements for an artwork to be eligible for copyright: It must be composed in a fixed medium and it must be original (which she described as more creative than an alphabetized phonebook).

Copyright law carries “fair use” exceptions, including when a work appears incidentally in the background or if the use is so fleeting as to be trivial. But the lawsuits allege that corporations have gone beyond any exception, putting the street art to use for their own commercial purposes. As Anasagasti’s suit argues, “In today’s fashion marketplace, affiliation with artists bearing such ‘street credibility’ is highly sought-after by retail brands for the cultural cachet and access to the profitable youth demographic that it offers.”

Street credibility is a fuzzy term, but these cases could provide some clarity on what it means. Anasagasti’s suit makes the case that his reputation rests on the idea that he won’t sell out to corporate interests, and Shienbaum says that American Eagle’s use of the eyeball badly distorts the meaning of the images, which represent the working-class grind.

How much is that street credibility worth? The suit seeks data on American Eagle’s sales, including its software that tracks exactly how many customers viewed the ads and subsequently made purchases. Such an audit could provide a more precise answer in dollar terms of how much his street credibility was worth to American Eagle. Similarly, the San Francisco artists suing Roberto Cavalli, the high-end fashion designer who has a store on Beverly Hills’ Rodeo Drive, also want an audit of profits. Their lawsuit asserts, “Nothing is more antithetical to the outsider ‘street cred’ that is essential to graffiti artists than European chic, luxury and glamour.”

It’s not clear why the defendants wouldn’t have reached out to ask the artists for permission to use their work. Defendants either declined comment, did not respond to requests for comment, or have yet to respond in court filings. Jami Gekas, a lawyer for the artists suing Gilliam, said, “They must have just assumed that urban artists like my clients aren’t organized and aren’t going to think about copyright.”

Seeking copyright protection may sound like the latest evolution of street art away from its countercultural, outsider origins. But street artists have long wanted greater control over their work. The 1983 documentary Style Wars featured young graffiti artists wishing they could use New York City
subway trains as canvases without fear of their work being erased or written-over. British street artist Banksy has objected in vainto people who take his art off the street to sell it.

Stacey Richman, a lawyer who represented street artists in an out-of-court settlement in 2011 when Fiat used their art in a commercial without permission, says she hears the same story again and again. “These people are generally living hand to mouth, and if the corporations are going to take advantage of their work, they deserve to be paid,” Richman argues. If somebody's going to profit from this art, copyright may be just the tool for ensuring that that somebody is the artists themselves.

Tags: can graffiti be copyrighted? 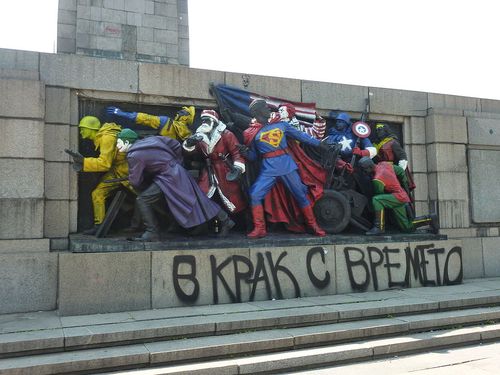 The Moscow Times is reporting that Bulgarian pranksters are repainting Soviet-era monuments so that the Soviet military heroes depicted are recast as American Superheroes (h/t to trans-atlantyk posting at reddit’s /r/worldnews):

Russia is demanding that Bulgaria try harder to prevent vandalism of Soviet monuments, after yet another monument to Soviet troops in Sofia was spray-painted, ITAR-Tass reported.

The Russian Embassy in Bulgaria has issued a note demanding that its former Soviet-era ally clean up the monument in Sofia’s Lozenets district, identify and punish those responsible, and take “exhaustive measures” to prevent similar attacks in the future, the news agency reported Monday.

The monument was sprayed with red paint on the eve of the Bulgarian Socialist Party’s celebration of its 123rd anniversary, the Sofia-based Novinite news agency reported.