Own A Piece of Street Art, But Don't Take It Home. 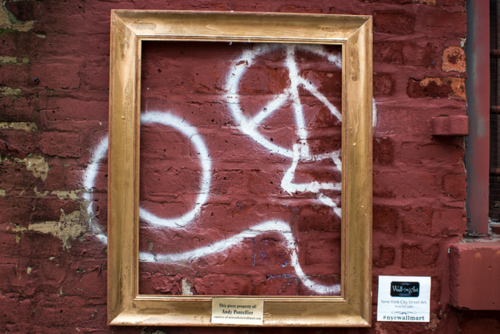 I am really not sure how this works or whether your art will have longevity but I give them credit for originality.

Wall-m(Art) is a new company that lets the public purchase street graffiti from the walls of the city. Fine art or vandalism – whatever you choose to call it – that covers subways, urban walls and street corners is officially available to anyone who wants to stake their claim as one of the lucky firsts to own the one-of-a-kind work.

The potentially illegal concept stemmed from a simple idea: New York public space boasts some of the most unique and “badass” street art around the globe. Now, Wall-m(Art) wants to make it profitable. All you have to do it purchase the desired artwork and wait 3-4 weeks for a shiny gold frame to hang around it in its urban location. A plaque with your name on it will ensure that all passerbys know about your new art real estate.

A picture of the framed artwork acts as a receipt, with no exception for exchange or return. You can think of it as a way to share an art collection with neighbors and the greater of Manhattan, a museum that everyone can appreciate.

If you’ve always wanted to own your own hard work/art/vandalism created by a New York artist, you can officially browse the collection online or customize your own. The first few have already been purchased and hang proudly throughout Brooklyn. Warning: you must be 18 years or older to purchase, or have your parents’ permission.

Since street art changes minute by minute, I am not sure if waiting for the frame is a good idea since your art might be gone by the time the frame is hung. So if you want a street art canvas that you can really take home and hand on your wall, check out my portfolio.

Designers Eran Shimshovitz and Ariel Zuckerman of the Ariel Zuckerman Studio in Tel Aviv are working on a project that brings graffiti on the streets to the world of furniture-making.

Their project called Street Capture combines street art and furniture. The designers attach wooden boards to the walls along hidden streets and small alleys – providing anonymous graffiti artists with a clean canvas for them to work on. After the wooden boards have been filled with street art, the designers take them down and bring them back to their workshop. The wooden boards are then used to create functional furniture like drawers, chests, and tables.

Here is how it works:

According to their submission on Designboom, the designers didn’t tell people what the wooden boards were for because they wanted the street art to evolve naturally as if it were any other wall on the streets and allow the street artists to add their work anonymously.

It takes a couple of days or more for the wooden boards to be covered in graffiti art. Sometimes the boards remain untouched the morning after they were installed and sometimes only a few lines were added. The designers wait a few more days before they consider the art on the wooden boards as “complete.”

So far the designers have already been able to create a dresser called “Zerifin 35″ after the street address of the wooden board it was made from, a pair of bedside drawers, and a table from wooden boards they installed on street walls. The project is an ongoing series.

This Week at Brooklyn Street Art

700,000 tombs come to life as part of a project to reinterpret public spaces

This by Ross Brooks:

Panteon de Dolores is the largest cemetery in Mexico with a staggering 700,000 tombs spread over 590 acres – many of which house more than one person. In a strange twist of fate, it was recently brought back to life in the form of an animated video. It’s all part of a project called Ciudad Intervenida, which challenged emerging talent from six of Mexico’s best animation studios to reinterpret public spaces through animated interventions. Don’t miss out on the mind-boggling video.

Directed by Alejandro Garcia Caballero of the Mexico City-based Llamarada, a firm that specializes in traditional and digital animation, the video features strange creatures that come to life in the night. Unlike the sombre nature of death in the West, the video also features a fairly upbeat marching tune that makes you feel like you’ve fallen down the rabbit hole.

Through this short films, the directors aim to reinvent iconic places of the city to modify the predetermined cultural value that each city space already has. Whether through a computer or a mobile device, viewers can experience places like the Sonora Market, the Vasconcelos Library or the Dolores Cementery, as new and transformed.

Even though Panteon de Dolores is just one of six different animations on offer, all of the video share the same goal:

The project’s purpose is not only to promote the work of the directors and studios involved, but also to create work that invites the public to see the spaces of the city as they’ve never been seen before.

If you haven’t already watched the video, then now is the time.

What will they think of next? One part Holi, one part marathon the annual graffiti run in Miami looks like great fun!

The instructions are to arrive in your whitest attire to create a perfect blank slate, then walk, jog, roll, or line dance your way through this delightfully pigmented course. Using nontoxic, corn-starch-based color powder, you'll be sprinkled... okay, blasted with pain-free and glorious color throughout the race until you resemble living tie-dye as you cross the finish line. After the race, make friends with the colorful citizens of our city at the post-5K Color Party with music, food, and festivities. Take the tots away from the tube for an event that will animate the entire family.

Sunday October 12, 2014 at the Virginia Beach Key Park in Miami.