After the nighttime commemoration on the evening Of Novemebr 18, 2014, my frined and I decided to return the next day to see how much was destroyed in the daytime. Devastating.

We were not allowed to go in the construction area so most of the photos were taken through the viewing plexiglass around the site.

Here are some of the photos: 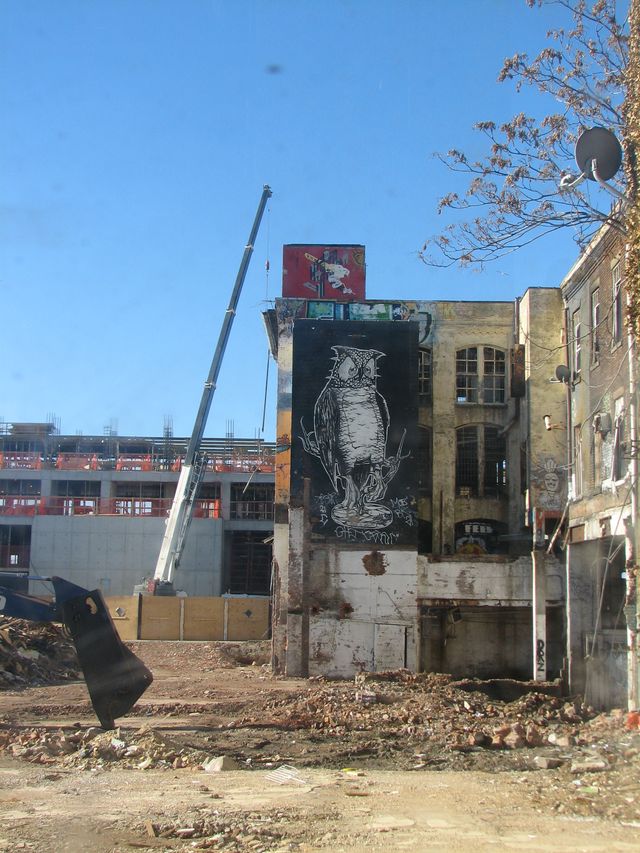 The Destruction of 5Pointz - November 18, 2014 Commemoration

Last night I attended a rally to commemorate the one year anniversary of the whitewashing of 5Pointz. It was a sad but affirming experience that brought some intrepid 5Pointz fans out on a very cold night. Meres was there as was Marie and they providedt-shirts and signs. When we arrived I had no idea that so much of the origianl buildings were already destroyed. A sad, sad night.

Here are some photos of the event. 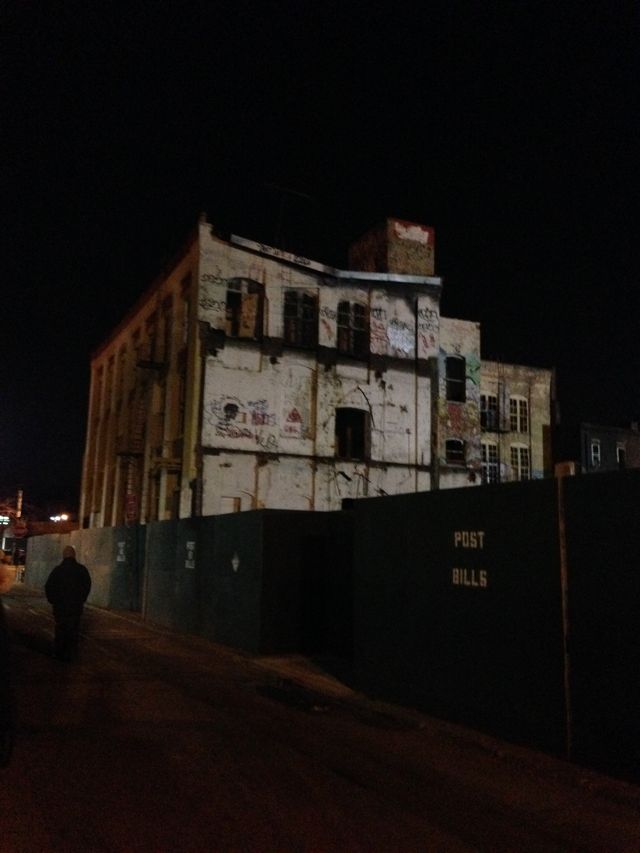 This post is in memory of my dear friend Michael who passed away almost three years ago and who loved origami. Found this great article on PSFK. 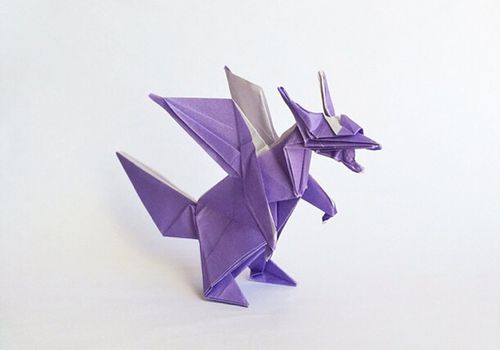 Origami made a name for itself outside of Japan during the 1900s, and to this day it attracts a hardcore following of paper folding enthusiasts. One of those is Ross Symons, a Cape Town artist who’s been posting a different origami figure on Instagram every day since the start of 2014. He’s built up a following of nearly 40,000 people with a collection of figures that demonstrate origami’s true potential.

Symons started the project as a way to challenge himself, which has since grown into an international community of origami enthusiasts. His current measure of success is fold time; the more discipline and patience he has, the faster he folds the figure. Some of the figures include dragons, bears, unicorns and rhinos – which is only the tip of the iceberg.

Thanks to his strict regime of practice, the artist has positioned himself as a global expert on origami – which serves his passion perfectly. “No matter how complex or simple. I love—and when I say love I mean I’m totally obsessed with—folding paper.” If you want to get in touch with Ross Symons for any custom work or collaborations, you can reach him via his Instagram, Facebook, or website.

Is the Crackdown on NYC Graffiti Back Firing 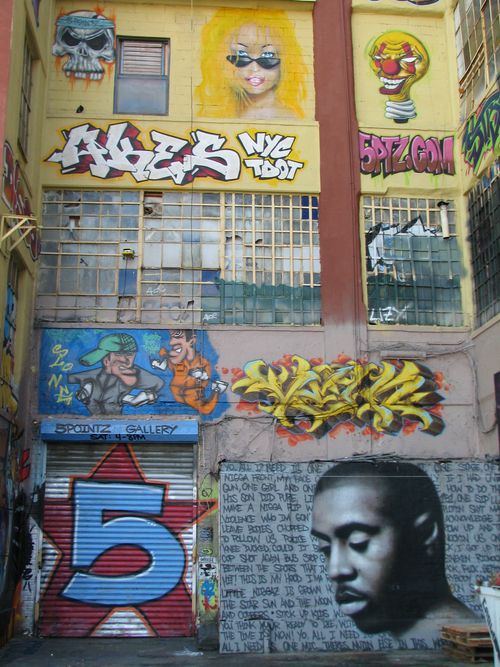 I just finished reading this wistful article by John Surico (see excerpt below) who says that the recent crackdown on street artists in New York City is backfiring and that graffiti is actually expanding in the city. I wish I could say that is true but I don't see it.

When I first started photographing graffiti in earnest in 2003 (I took photos here and there since the 1970s) there was a wealth of amazing work all through Manhattan and into the boroughs. Each corner revealed something new. But the pickings are slim now. So much of my old stomping grounds are gentrified and sterile. I just don't see where John is seeing all this graffiti.

Sure, we have Bushwick and Welling Court and a couple of other hot spots. But the general spread of street art has been stopped. 5 Pointz is gone. The Chocolate Factory is gone. 11 Spring Street is gone. Even the Bowery residence of Jay Maisel at 190 Bowery is said to be sold for more luxury condos.

This saddens me because I beleive that street art shows the vitality of the neighborhood and adds to the life of the street. It is not blight. It is art. Our short sightedness of cracking down on graffiti makes our world in NYC that much more barren and sterile. People want to live here because of the energy and vitality and it is being slowly strangled.

Anyway, enough of my complaining. Here is a short excerpt of John's article:

In 1994, ten months after winning the New York City mayor’s office for the first time, Rudy Giuliani stood in front of news cameras and announced the newest target of his “broken windows” policing strategy: graffiti.

"A cleaner city is a safer city," Giuliani said. "That's something that everyone instinctually understands. And something we have to make a big part of efforts to improve the quality of life in our city.” Parks Commissioner Henry J. Stern added that "the 60s are over,” and called graffiti "a metaphor for urban decay perhaps best shown in A Clockwork Orange."

A 25-man vandal squad was launched by Bratton’s NYPD to hunt down taggers, and in just 17 days, 21 people were arrested. Several city agencies coordinated to form an anti-graffiti task force to fight the plague of aerosol, and selling the spray-on chemical to kids under 18 was banned.

Given his reputation as a progressive concerned about income inequality and police excesses, few expected new mayor Bill de Blasio to treat graffiti as one of the city’s chief menaces. But the anti-graffiti movement has reared its head yet again now that its founding father Bratton—who called the City as Canvas exhibit “outrageous”—has reclaimed his old gig as police commissioner.

The numbers show Bratton means business: According to the  the first eight months of 2014, graffiti arrests rose 4 percent, to 1,080. Last year, 3,598 people were arrested for graffiti or graffiti-related crimes, and that was actually lower than 2009 and 2010, when the number surpassed 4,000. But the most symbolic gestures of the rejuvenated crackdown have been the NYPD’s gloating arrest of Cost (45-year-old Queens resident Adam Cole) last month, and November’s whitewashing of 5Pointz, the soon-to-be-demolished Mecca for graffiti artists in Queens.

Opened in 1993, 5Pointz was a place where graffiti writers of all ages could spray in New York City without being subject to arrest. It brought tourism in the area, drawing national and international attention to the local street art scene. In that sense, Cohen says, 5Pointz was “never a cure but an alternative” to the city’s graffiti crime problem.

“It feels like we’re back in the Giuliani years,” Marie Cecile Flaguel, a volunteer and organizer at 5Pointz, told me. “Since September of 2013, there has just been this zero tolerance. Like, these kids will be taught a lesson by being charged with higher offenses.”

Of course, it’s not the 90s anymore, and graffiti has lost much of its stigma. Most writers Flaguel knows tend to be graphic designers or set designers. “It shows that Bratton has not paid attention to anything going on in New York City since he left,” she told me.

Flaguel thinks busting graffiti artists distracts the local cops from fighting serious crime, like robberies or homicides, which have increased in Long Island City’s 114th Precinct, where 5Pointz is located, over the past year. “When we concentrate on these lower-level things, we miss the big-picture issues,” she added. “It’s much easier to just bust a 17-year-old walking home in Queens late at night with a marker in his pocket.”

The problem for Bratton, like so many American security hawks, is the unintended consequences. Just as many tactics used in the wars on terror and drugs exacerbate the problems they're supposed to solve, intense enforcement of graffiti laws seems to be doing more harm than good.

Reasons for the big bump remain murky, but to Antonio “Chico” Garcia, a longtime NYC graffiti writer, graffiti is just like weed: “The more you fight it, the more there'll be. And you can’t win a fight you’ve already lost.”