Wolkoff Vampires Beaten Back .. For Now 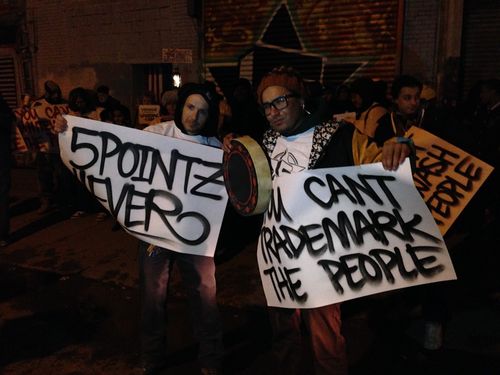 This in from Curbed:

As if abruptly whitewashing Long Island City graffiti mecca 5Pointz overnight ahead of its demolition to make way for a gigantic, soulless dual rental tower development that will have a few feeble dedicated graffiti walls in an attempt to appease the dismayed street art community at large isn't enough, DNAinfo reports that the father and son development duo Jerry and David Wolkoff are now attempting to trademark the 5Pointz name for use at said new development.

Apparently the Wolkoffs, who have owned the building "for decades" and graciously allowed the rampant street art activity in past time, are arguing that, because the name 5Pointz belonged to the building and the area and not the art and artists, their re-appropriation of it is okay; nevermind the slighted street art community who views the proposition as an attempt to "bank off our name." The New York Times previously reported that the moniker 5Pointz originated from artist and building curator Meres One.

The United States Patent and Trademark office has rejected the Wolkoffs' proposal, filed in March, because it sounded too similar to the already-trademarked Five Point. The Wolkoffs now have 90 days to respond to the rejection, to which they'll probably pound their fists and stomp. Jerry Wolkoff doesn't seem to be taking the widespread rejection of his new development by artists too well, saying, "Most of the people will be back, they'll be back and they'll be happy and it'll be better." Yeah, right.
· 5Pointz Developer Wants to Trademark Name and Use It For New High Rises [DNAinfo]
· All 5Pointz coverage [Curbed]