This amazing story of a father who built a castle for his daughter from reclaimed objects is complete with mystery, redemption and love. Read the entire article here. 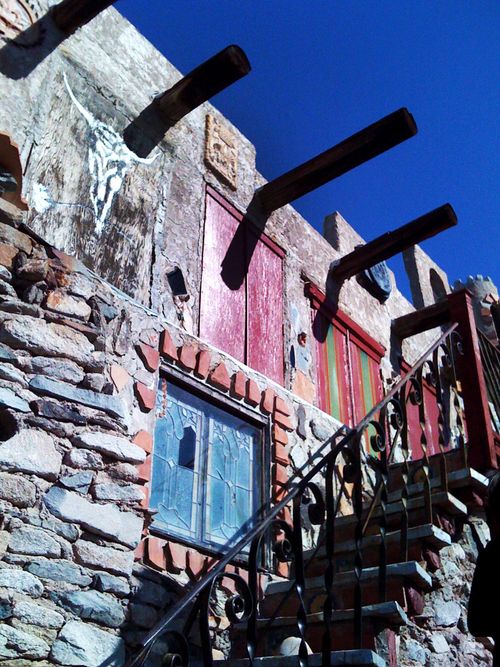 The biggest mystery concerning Phoenix, Arizona's Mystery Castle is why someone would want to build an 18-room palace out of rocks and trash. We already know who built it: Boyce Gulley, a mostly self-taught architect from Arkansas by way of Washington state. We know how he built it: from stone and sand and water hauled in from miles away, so as not to destroy the surroundings, padded out with bric-a-brac like car parts, glass dishes, and old blackboards.

But it turns out the Mystery Castle is also the site of a strange yet heartbreaking tale. Hewn from the detritus of life, it's a memento to lost fathers, kept promises, and letters from beyond the grave.

Until Mary Lou Gulley was 22, she had no idea that her father was building a chimerical mansion. In fact, she wasn't even entirely sure he was alive. Boyce Gulley abandoned his family in 1929, when Mary Lou was five years old. He didn't disappear completely—he exchanged some letters with his wife and daughter—but he never returned to Seattle, and they believed he had deserted them to follow his dreams of being an artist.

In 1945, Mary Lou got a letter from her father, whom she hadn't seen for 16 years. He'd left, he told her at last, because he'd been diagnosed with tuberculosis, and didn't want to be a burden on his family. “It wasn't art I wanted,” he wrote, “it was you.”

The dry air of Arizona, often prescribed for tuberculosis patients, had been more effective than expected, and though he was writing the letter from his deathbed, in the end it wasn't tuberculosis but cancer that did him in. "The theme song of Arizona," Mary Lou noted wryly in her memoir, My Mystery Castle, is: "'I came here umpteen years ago to die, but, oh, look at me now!'"

In the meantime, Gulley's letter said, he'd built this 18-room trash palace, and now he wanted her and her mother, Fran, to live there. They moved in immediately; after all, it was Boyce's final gift. In her book, Mary Lou recalls making childhood demands for a castle of her very own. Elsewhere, she said that one of her earliest memories of her father was of him building her sandcastles on the beach, and promising to make her one big enough to live in. Well, here it was.

Fittingly, there is sand in the mix at Mystery Castle—and rocks, and adobe, and a natural cement called caliche, and even goat's milk. (The milk helps cement and plaster mixtures stick together and makes them easier to work with.) There's also part of a salvaged car, a 1929 Stutz Bearcat, incorporated into the walls; the windshield is used as a kitchen stove vent, and Gulley made windows out of the wheels, rims, and headlights. The castle features telephone pole beams and a wagon wheel fireplace, and the slate floor of the living room is made of discarded schoolhouse blackboards. There is also a bar and a wedding chapel (both no longer used); their creator called the space between them "Purgatory."

The Audubon Mural Project is a collaboration between the National Audubon Society and the Gitler &_____ Gallery to create murals of climate-threatened birds throughout John James Audubon's old Manhattan neighborhood.

If you’re an artist or an upper-Manhattan landlord or business owner who would like to participate in this project, please contact Avi Gitler. Also, please contact Avi if you're interested in supporting the project in any other way—spray paint sponsors urgently sought!

Special thanks to all of our donors thus far!

How It All Started

In early October, just weeks after the release of the Audubon Birds and Climate Change Report, an art-gallery owner and an artist approached us with an audacious and unconventional scheme for spreading the word about the plight of birds: Street art! Murals! Murals of climate-threatened birds! Avi Gitler had just opened his Gitler &_____ Gallery in the Hamilton Heights neighborhood of Harlem, on Broadway between 149th and 150th streets—a few short blocks south of the Hudson River estate where John James Audubon lived the final ten years of his life, and of the cemetery where his remains reside today. Inspired by this proximity to the heritage of America’s greatest bird artist, Gitler decided to commission a series of bird murals to cover the rolling steel security grates that descend over business facades at closing time. Then he met Tom Sanford, a painter who lives nearby—and who, due to a serendipitous accident of residential geography (his next-door neighbor is Audubon VP/Content Mark Jannot), was deeply aware of the Audubon Report and its implications, which he proceeded to explain to Gitler.

So, by the time they came to us, Gitler’s mural plan had morphed and expanded a bit—from maybe a dozen birds to 314, a depiction of every one of the species identified as climate-threatened or endangered in the Audubon Report. The public art would flow throughout the Hamilton Heights and Washington Heights neighborhoods of upper Manhattan—JJA territory—creating a tremendous outdoor gallery of birds, all tagged with the URL of the Audubon Mural Project. Intrigued passersby would investigate and end up here, with an opportunity to learn more about this existential threat to birds, and about how they can take action to help head it off.

And so, voila! Here we are! If you are one of those intrigued passersby investigating what the murals are all about, we invite you to click here to learn more about the Audubon Report. Alongside each mural photograph below you’ll also find a link that will take you to a page with maps and other info about the threat to that specific bird.

The Audubon Mural Project is only just underway, but already the results have been visually stunning, as you’ll see in the gallery below—a gallery that will be continually augmented as new murals are painted. The project has already made the front page of The New York Times—read that coverage here.

Watch the most recent mural be painted, across the street from John James Audubon's final resting place:

Videograf - A History of Graffiti

Videograf Productions serves as the collective memory of New York City’s third generation of graffiti writers and bombers—those hardcore devotees who soldiered on after the city had supposedly stamped out graffiti. Launched in 1989, Videograf is a recurring series shot in a magazine-style format—the “60 Minutes” of the underground graffiti scene. It was conceived as reporting from the trenches for writers, by writers. Founders Carl Weston and Colin Turner and producer William “Nic One” Green are credited by most on the scene as the first to capture the movement on video and self-distribute it on VHS. For the first time, viewers could watch artist interviews and ride along as bombers ventured into the wee hours of the morning and laid claim to their city.

Learn more of the history of Videograf in this link.